When sitting in a hide waiting for a glimpse of an elusive bittern or when ambling through one of the few remaining wildflower meadows with bees and butterflies in the air around you, politics and the troubles of the world can seem entirely distant. Nature has a great capacity of grounding us. 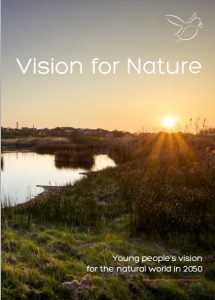 However, as AFON’s Vision for Nature report and multiple other reports (such as State of Nature) have shown in previous years, like it or not, nature is overwhelmingly political, at least when it comes to its conservation. Without legislation to protect species and special habitats our job as conservationists would be much more difficult.

As young conservationists we are quite different to most of the electorate in that (and I’m making quite an assumption about the way you think here) we place conservation of the natural world as a priority for planning our collective future. Having said that, back in 2015 YouGov asked voters to assess whether particular topics had been discussed enough and the environment featured strongly in the ‘not been discussed enough’ category. Clearly there is therefore a general awareness that issues such as climate change and habitat degradation are important to people. It’s just that other issues, such as Brexit and the NHS, feature higher in most people’s electoral minds.

There have been several posts on the AFON blog in the past suggesting that nature is or should be seen as political and we should hold our politicians to account when it comes to conservation legislation. I want to suggest in this post that we should hold nature in our minds when casting our votes and we should quiz our prospective candidates on issues to do with the environment and nature – the likelihood is that very few others will do the same.

However, as with our own lives when we cast our votes we will be making our decision on a number of different factors. Young people’s issues push into many areas beyond the obvious (education policy and the subject of tuition fees). From job seekers allowance to the management of the NHS and critically, for this election at least, the future direction of our relationship with Europe, there are numerous issues that directly impact on our generation and a particular party winning could genuinely have a big impact on our everyday lives.

Lots of young people are turned off politics because it is perceived as benefiting older generations. However, in reality, it tends to be older people that actually vote, so it’s little wonder that the politicians swing their policies to favour this part of the electorate. It’s a vicious circle. If fewer young people vote, fewer policies will come about with young people in favour. If fewer policies help young people then our demographic is less likely to vote.

However, we really need to get away from that perception and just get out there and cast our votes. At the EU referendum last year 64% of 18-24 year olds didn’t bother to vote. If they had voted (and voted for remain) they could have swung the vote. Reality would be very different now. Indeed, this general election probably wouldn’t even be happening and David Cameron would probably still be in Number 10.

I’m not going to suggest that you vote for a particular party, but I am asking you to vote, and what’s more, encourage all of your friends to vote. It’s really easy and hardly takes any time at all. I’m sure that we all know someone who is eligible to vote but just doesn’t. It’s up to us to make the case.

So, to finish, some quick reasons to vote:

Ben Eagle is an environmental and agricultural writer and young farmer from Essex. He has been an AFON committee member since January 2016. He blogs regularly at thinkingcountry.com and tweets @benjy_eagle. He has previously written for The Guardian, Farmland Magazine and Rewilding Britain among others.