As someone interested in conservation, I am perhaps not alone in having a slight natural aversion to cities. Buses, commuters, sirens, the rat race – not really my cup of tea. Probably because I grew up far away from it in the picturesque countryside of Dumfries and Galloway. Having spent many enjoyable years exploring wild woods and ancient oaks, I suddenly found myself having to understand the urban jungle.

City life is not new to me – I spent four great years studying in Aberdeen. Yet having moved back home after university, things I had taken for granted were suddenly so much more treasured. Coastal cliffs, uninterrupted habitats and nature on my doorstep. So when I accepted a job in Scotland’s capital city, I would be lying to say I wasn’t a tad apprehensive. Not about the job, that would be great! Actually it was the more important things, like where would I find space, nature and quiet? 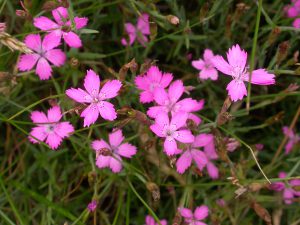 The good news is that I have, in my opinion, the best job in Edinburgh. That’s if you count butterfly surveys, toad patrols and leading guided walks through an extinct volcanic landscape as work. Of course not every day is sunshine and maiden pink. Holyrood Park is a wide expanse of rugged terrain, with the remains of an extinct volcano (Arthur’s Seat) dominating the Park and Edinburgh’s landscape. Moving through the Park, one can almost be completely lost in the wilderness and crucially, escape from the hustle and bustle of capital city life.

Having now lived and worked in Edinburgh for a year, I have had the opportunity to experience how the city and nature varies across the seasons. Summer is a busy time for all, with lots of new additions to both populations. As tourists swarm the city, bees and butterflies fill the air, and young grey herons look to find a new home in an increasingly competitive market.

As the city gets busier, I use the Park to not only work but enjoy nature. I find myself discovering the wonders of urban wildlife, dismissing a sort of ‘rural wildlife superiority complex’. I marvel at the family of long-eared owls that were raised in Holyrood Park last summer and the wonders of the skylark song, calling high above the bustle below. My interest continues to the otters and foxes who have chosen the city as home, the fulmars who seem so out of place and those mythical ravens. I learn it is not only the ‘common’ that have undertaken city life. Some of Holyrood Park’s smallest residents are the most fascinating. In fact, some species can only be found in this surprising wildlife hotspot. In the UK, the bordered brown lacewing is thought to only survive on Arthur’s Seat, just recently ‘rediscovered’ for the first time since 1982! 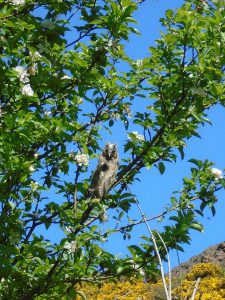 Findings like this show how much we still don’t know about the natural world and the species that live in our cities. If I ever needed any extra motivation to go explore the urban countryside then I need look no further. Perhaps city life isn’t so bad after all…

Gordon Smith is an Assistant Ranger with Historic Environment Scotland at Holyrood Park, Edinburgh. He has a BSc in Zoology from the University of Aberdeen.