Hello, my name’s Alicia Hayden, I’m 14, and I am passionate about nature conservation, photography, writing and art and I have recently joined A Focus on Nature.

I have just returned from a fantastic wildlife-packed holiday in Scotland and would like to share some of my highlights with you.

We spent the first week in the beautiful Cairngorms National Park – the first time I had visited there.  One morning we went on a guided walk with an RSPB Ranger who told us about the ‘Granny Pines’ – Scots Pine Trees that have been here for hundreds of years and are hosts to a huge diversity of species – great for the wildlife!  We saw our first red squirrels of the week here and found out a lot about the wildlife of the area and the RSPB’s plans for the future.

Ospreys are becoming a real success story in several areas of the British Isles, however here in the Cairngorms is where they first bred successfully back in the wild.  They are celebrating their 60th year of the return of the Osprey to Loch Garten in 2014 and the pair this year has reared 3 Chicks.  One of the wardens at the hide explained to me that the Ospreys don’t fish in the loch next to the nest as it is mainly full of Pike, which are extremely bony and much more difficult to eat. Instead they fly to a loch a few miles away and fish there, where they can carry a fish up to half their own body weight! The Hide is surrounded by Scots Pines, and it wasn’t long before a couple of Red Squirrels took advantage of the peanuts in the bird feeders and there were Chaffinch, Treecreeper, Great Spotted Woodpecker, Coal tits, but unfortunately no Crested Tits. 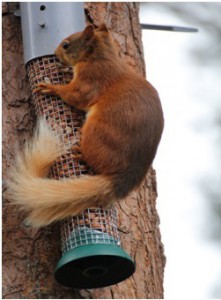 Red squirrel on the feeder at the Loch Garten RSPB hide. © Alicia Hayden.

In the forest, I spotted a family of Goldcrests, and further along, a Redstart. There were lots of dragonflies flying around.  In the meadow near our holiday cottage we spotted the rare Black Scotch Argus Butterfly – joined by one of the Blue Butterflies, both managing to avoid my camera!

One day we visited Chanonry Point on the Moray Firth, where Bottlenose Dolphins are often seen. We saw some around lunchtime but they didn’t stay for long, so we decided to return on the turning tide in the evening.  I was scanning the sea with my binoculars, when at about 7pm, the Dolphins returned – along with a large group of photographers, with big lenses! The Dolphins came close to shore, breaching and catching fish, feeding and what looked like playing. It was mesmerizing to watch and I estimated there were 30-40 which included some young ones. Finally, the activity died down and we retreated to find our own fish and chips, leaving the Dolphins to fish in peace – both my camera and binoculars had a lot of use today! 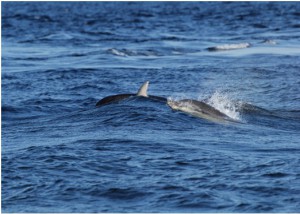 In our second week, we moved over to the wildlife-watchers’ paradise of the Isle of Mull.  We spoke to a Man running the Dolphin & Whale Centre at Tobermory, who said that the previous week there had been a super-pod of 300+ Dolphins reported in the Sound of Mull. It’s a shame I was a week too late!    We did some lovely walks on Mull, mainly near the coast, but when we were driving back to our holiday cottage through the forest one evening we saw five Red Deer including a female and her young fawn. They grazed peacefully for a while whilst I watched and photographed them from the car before they eventually wandered deeper into the woods. A couple of Buzzards rested on telegraph posts by the road, undisturbed as we drove past.

There was a lot of wildlife around; birds including Buzzards, Hooded crows, Rock Pipits, Greylag Geese, numerous Grey Herons, Knot and lots of Oystercatchers on the coast!  On the beach one day I spent some time observing Sandhoppers. Usually Sandhoppers are about 1cm in length. However as I dug deeper into the sand, slightly bigger Sandhoppers appeared; they seemed more aggressive than the numerous small ones. And finally, I came across one very large Sandhopper, about 4.5cm in length. It didn’t hop as much as the others, and instead buried deeper. I thought that this was very unusual, and wondered if there is a social system in Sandhoppers and is this a “Queen”?  I’d love to know.

On Mull, the Eagle Watch did not fail to disappoint.  We had a really interesting talk by John Clare, the RSPB warden, who told us lots about the re-introduction of the White-tailed Eagles.  Not only did I see the chick on the nest, doing lots of wing flapping as it was due to fledge any day, but I also saw one of the adult birds, and a couple of Golden Eagles, which were taking advantage of the warm air and gliding upwards on the thermals!  Kestrels, Ravens and Hooded Crows were also flying about and in the forest behind the hide, we heard Firecrest, but I couldn’t spot them with my binoculars or the camera! There were lots of colourful dragonflies hunting in the sunshine and butterflies, including Speckled Wood.
On the island of Ulva, the flowers were beautiful and they were attracting Speckled-Wood and Scotch Argus butterflies.   I saw Grey Herons and in the sea, a Grey Seal, crabs, fish, and an Eel! 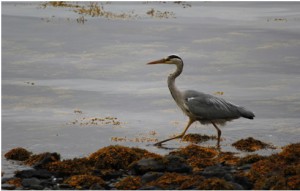 One of the (many) Grey Herons, fishing at the side of a sea loch. © Alicia Hayden.

On the peaceful island of Iona, Corncrakes thrive and when we walked to the north of the island we could hear the  ‘Crk crk crk’. I’d never seen a Corncrake before, and was looking into one of the meadows where we could hear them when two brown, medium-sized birds flew up.  My first Corncrakes!  I was very excited, but annoyed with myself for missing a photo opportunity like that! It became even more frustrating when the Corncrakes refused to appear again for the whole day, but kept calling, tantalisingly close-by.  However, there were lots of Meadow Pipits and House Sparrows in the meadows, which were a lot easier to spot than the Corncrakes.  While were were waiting for them to appear, my Dad and I counted 77 Cormorants all flying in a line! 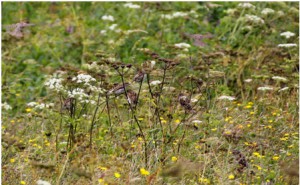 The corncrake meadow, lovely flowers and lots of sparrows, but not a corncrake to be seen! © Alicia Hayden.

On the way back from Iona, we saw lots of wildlife too, including Barnacle Geese, yet more Grey Herons, Eider Ducks, Oystercatchers, Curlews, Buzzards, Mute Swans and a Golden Eagle!

Our holiday was almost over, and yet the wildlife kept appearing. On our last day, we saw Common Lizards sunning themselves on rocks, joined by Cinnabar Moth Caterpillars –  allowing me to practise my macro photography. A spider nestled in a post watching my camera lens intently. Bees, Hoverflies, Dragonflies, Froghoppers and many more invertebrates were amongst the wildlife that I spotted on a walk to the coast on the north-east of Mull. Later on in the evening, Grey Herons,  Buzzards, Rock Pipits,  Oystercatchers, Greylag Geese and a leaping fish all joined this wildlife bonanza!  The only species which had been on my ‘list’ which I didn’t managed to spot this holiday, was an otter.  Perhaps next year.

Scotland is an amazing place, with abundant wildlife. It has provided me with some ‘first sightings’ (Dolphins and Corncrakes), magnificent eagles and lots and lots of Grey Herons!  I can’t wait to go again … !