Sophie May has had a passion for the natural world since early childhood. Now a writer and photographer of natural history and countryside subjects, living in a historic market town in the centre of the South Downs National Park, the countryside of West Sussex and surrounding counties provide much inspiration for Sophie May’s work. Sophie May is building a career in Conservation, currently working for the RSPB on a Heritage Lottery Funded Traineeship (ending September 2014), through which she is grateful to be able to share her passion for nature, experiencing wildlife and its conservation, with others. Photographing butterflies and flowers, gardens and animals, landscapes and wildlife, is something Sophie May particularly enjoys, whilst much of her writing is creative, descriptive and poetic, exploring the way words work and sound, and the power of imagery. To read more of Sophie’s writing visit her website (http://www.sophieco.co.uk), or you can follow her on Twitter (@SophiEcoWild).

Back in the leafy rolling countryside of her home in West Sussex, AFON Member Sophie May Lewis, has lots of stories to tell from her time as Ornithology Intern, with The Isles of Scilly Wildlife Trust this October. 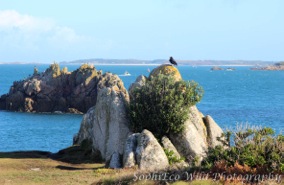 The last few days of September were a rush of excitement and expectation. I arrived on the Isles of Scilly around lunchtime on a sunny, calm, Wednesday October 1st. The blue sea contrasted strongly with the deep green of pine, russet orange of autumn bracken and glittering grey of granite that make up the headlands which tumble down to sing with the waves. From the crowded railings of the steamship company’s vessel RMS Scillonian III, day-trippers ‘ooh’d and pointed, cameras snapping. I leaned out over the side of the boat, watching our progress through the frothing waters and soaking up the sightof the wild rocky outcrops and curved beaches of white sand. Persil-white gannets, with their inky wingtips and cream-coloured heads, had accompanied us across the 28 miles from the mainland, peeling away over the waves as we approached the islands. The gannets were the first birds I saw, the start of a list that would total 60 species by the end of my visit. October is traditionally a fabulous month for birding on Scilly, when, with autumn gales and low-pressure systems drawing birds down from the artic, the eastern coast of America and across from the continent, the archipelago’s 40plus resident breeding species are joined by an unpredictable variety of migrant birds, either passing through or blown far off course. I was met on the quay by one of the Isles of Scilly Wildlife Trust Rangers Rob, and Volunteer Media Officer Ed Marshall (previous AFON Photography Intern), and was soon beginning just under 4 weeks of my life that I will not be forgetting in a long while.

First task: familiarise myself with Scilly, particularly StMary’s island where I was based. Taking just over an hour to walk from one end to the other, St Mary’s is the largest of the islands. Elm trees line many of the high-banked lanes, a rare sight at home. The small flower-growing fields are bordered by tall, dense hedges of introduced Pitisosporum, which insulates the seaweed-fertilised, free-of-pesticides furrows, and coaxes bulbs into unseasonably early bloom. The perfect place for birdlife to shelter from Atlantic winds. With two wetland nature reserves, one wet woodland, andmiles of heathland along the concertinaed coastline, there was plenty to explore. 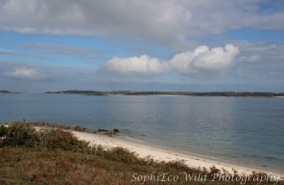 Second task: run an awareness campaign for the Isles of Scilly Wildlife Trust, with the visiting birders as the main audience. That meant time spent in the office, designing posters, writing blogs, contributing to social media, and drafting new temporary interpretation panels for the nature reserves. And each evening there was Bird Log to attend. Throughout the day, visiting birders spread out across the islands, congregating from time to time on the quay for the next boat to the off islands, at cafés and pubs, or at a gateway in a lane with binoculars pointed into the hedge. But in the evening, when darkness subdues the town and the possibility of rain hangs in the quiet air, they come, in twos and threes, gathering within reach of the bar in the Scillonian Club, to discuss the day’s miss-adventures.  Terms such as ‘dipping’, ‘stonking bird’ and ‘crippling views’ were regular vocabulary. A select elite of seasoned Scillonian Birders were entrusted with the Calling of The Log; recording the day’s sightings. It was a serious business, infused with a good helping of witty comments and good-hearted banter, of that strain of humour unique to birders.

Friday 10th of October was an important day in the calendar of my month’s volunteering. I ventured from the office to join the rest of the team of volunteers and Rangers, to help the Seabird Recovery project with a big task – a full island beach clean on St Agnes and Gugh. St Agnes and its sister Gugh, which are joined by a tidal sand bar, have been the focus of the Isles of Scilly Seabird Recovery Project that has been working to protect the internationally important breeding seabird populations. (A huge success: Manx Shearwater chicks successfully fledged this year for first time in living memory!) 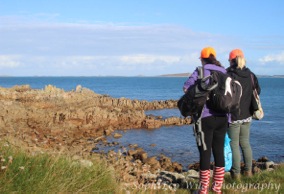 The biggest part of the work that project has been doing has been a concerted effort to eradicate Brown Rats from the island. Aside from monitoring the seabird nests and working with the island inhabitants to remove the destructive rats, the project has taken on other work such as habitat management, environmental education and beach cleans. Before long we were shedding coats and jumpers under the sun, remarkably strong for near-mid October. We followed trails through bracken, bramble and gorse, slithered and scrambled over rocks and scrunched over sandy beaches, gathering every piece of metal, plastic, rope or other rubbish to be found. Odd flip-flops were a common find, whilst plastic water bottles were by far the most frequent. Fishing line and nets were pulled from where they had wrapped around rocks, lumps of foam were retrieved from thick beds of tide-line seaweed.

Curlews called and Oystercatchers flickered over the rocks. A seal surveyed us down her long nose briefly from the sheltered water of a bay. Small brown ball-shaped Wrens jittered between the rocks and boulders, or rattled grumpily at us from the thick brambles. I have never known a place where my favourite bird is quite so plentiful as the Isles of Scilly.

Three weeks flew past and in was soon almost time to think about heading home. I began to wonder if the woodlands had yet to turn their autumn hues, and if any late flowers in my garden still bloomed. I imagined the badgers had churned up the fallen leaves along the grass verge more than once, and the jays would have polished off the acorns from the big old oak behind the house by now. 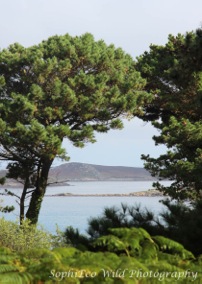 I left Scilly basking in late autumn afternoon sunshine and the following morning, as daylight strengthened in the sky over Penzance and Mounts Bay, my Scilly Adventure was well and truly over. Time to take my seat on the train that emerges from under the Victorian arches of Penzance station. Past the rich warm red cliffs of Dawlish and the lapping sea, the ploughed fields where the rooks gather, the orchards with their fruit-foraging pigs beneath the crooked trees, and the White Horse high on the distant hills. Past allotments where parsnips and brussel-spouts are nurtured for the coming season and pumpkins proudly glow in autumn sun. Past the parks where dogs are walked, sports played and half-term free range children run. Past the embankments where goldfinches feed on seed heads and a fox patrols.

The big old oak tree behind my house glowed all shades of gold and orange through the last few days of October.