Chris is a birder who is slowly evolving into an amateur naturalist, one increasingly keen on finding, learning about and promoting more ‘obscure’ wildlife. Through his writing he tries to get across the sheer beauty of nature, but also wants to highlight just how much fun – for want of a better word – wildlife can be. He is employed by Reading University as a Teaching Associate in the School of Biological Sciences, focussing primarily on engaging students with species identification, biological recording and conservation philosophy. He is in the early stages of a PhD in invertebrate landscape ecology, through which he ultimately hopes to make a contribution to conserving the sorts of bird and insect rich landscapes he loves to spend time in.

In an era where we’re supposedly more connected than ever, solitude and the art of living in isolation may seem irrelevant. On the other hand, some argue that our connections run so shallow that this is in fact the age of loneliness. Between the need many feel to escape the frenetic pace of modern life and the enforced isolation that many people live in, perfecting the art of living solo may be more pressing than ever. 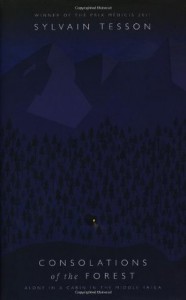 Consolations of the Forest by Sylvain Tesson (2011).

Consolations of the Forest by Sylvain Tesson (2011)

French travel writer Sylvain Tesson was tired – tired of trips which “begin as escapes and finished in track races against the hours,” tired of the excesses of life that he saw embodied in the aisles of the last supermarket he visited: “Fifteen kinds of ketchup. That’s the sort of thing that made me want to withdraw from this world.”

So he resolved to seek freedom by confining himself, for six months, in a cabin in the Siberian forest on the shores of Lake Baikal. A kind of Thoreauvian quest for the twenty-first century, only this time in more perfect seclusion and further from the accusations of fraud that have been levelled against Thoreau (whether deserved or otherwise). This truly would be the place to plumb the depths of his life.

Having said that, and considering that he was living quite alone in a remote part of an incredibly sparsely populated country, Tesson received a surprising number of visitors. Russian fishermen, soaked in vodka and disappointment; a pair of French painters; German kayakers; and eight 4x4s full of loutish members of Putin’s United Russia party. There’s almost a comic inevitability to these interruptions to his solitude, which almost always ended in arguments and heavy drinking.

Unsurprisingly, some of his visitors, steeped as they were in the trappings of a comfortable, Western twenty-first-century existence, are unable to comprehend his chosen lifestyle. Here’s an exchange with a tourist from Australia which particularly amused me:

‘What if you have a problem?’

‘Do you go to the village for food?’

‘There is no village.’

‘Are those your books.?’

Despite, or perhaps because of this unlikely cast of spoilsports – he compares a visit from Russian fishermen to having a cavalry division bivouac in his kitchen garden – but also in part because of painful news from the life he’d left behind in Paris, Tesson eventually began to despair of his isolation. He acquired two dogs, whom he considered better company than people, saying starkly that “without Aika and Bek, I’d be dead.” He nursed his sanity through routine: reading, writing, smoking, cutting wood, shovelling snow and fishing. And he clearly found some salvation in the grandeur of his surroundings, describing long hikes along the lakeshore and onto the mountain ridge, and the often astounding abundance and vibrancy of the forest’s wildlife:

“The air is loaded with bugs. A rumbling hum begins with the first glimmers of light and never falters until nighttime. Beetles crawl along the beams in the cabin, and the Capricorn beetles show a particular fondness for my shelves. Gadflies with nightmarish eyes torment the dogs. If these insects weighed ten or twenty pounds, as they did in the Carboniferous period, we’d be a lot less full of ourselves.”

Such excess is hard to imagine for those of us who live in populated, depleted parts of the world. The loss of abundance, particularly of invertebrates, is surely one of the unsung conservation tragedies of our time.

It’s worth mentioning the success of translator Linda Coverdale’s work on this English edition. The precise, dry-witted prose matches what I would imagine the style of the original to be, and rarely feels like reading a work in translation.

Consolations is a superb, lyrical, often knowingly absurd reflection on nature, society, and the trials and contradictions inherent in becoming absorbed in one in order to escape the other. It is indeed very much in the Walden tradition, yet its temperamental, sometimes ironic tone (Tesson finds Thoreau’s sermonising wearisome) is very much rooted in the twenty-first century. 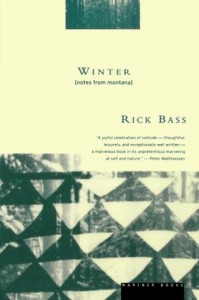 Winter is American author Rick Bass’s memoir of seeing out the coldest season high in the mountains of Montana. Some two decades before Tesson’s move to the Russian east, Bass settled in the remote Yaak Valley that is, in the words of the real estate agent who rented them a ramshackle ranch, ‘the end of the world,’ literally at the far end of the last road in the United States (before crossing the border into Canada).

He didn’t live completely alone – his girlfriend Elizabeth, an artist (whose lovely line drawings grace the book), joined him after two weeks – but their move certainly represented a withdrawal from the average modern lifestyle, and it was common enough to become completely snowbound in the valley in winter that they might as well have been living in complete solitude in the Russian Taiga themselves.

Their existence was ultimately reduced to basics, perhaps explaining why the book contains a surfeit of wood chopping scenes (though these do serve to make a practical point about the toughness of life in this part of the world, as well as making the connection between human and animal life). Bass compares himself to a great grey owl locals have “seen around Fix Ranch forever,” and to a hungry coyote – “They catch mice the way I gather wood. We’re all close, we’re all tied together.”

Despite the hard work inherent in surviving winter, life was not reduced to a mere struggle for survival. The would-be castaways ended up hosting their nearest neighbours, now friends, for cosy candle-lit dinner parties, proving that a back-to-nature experience need not be at the expense of the joys of human company:

“I’m supposed to be a hermit, but what a half-assed hermit I’m turning into: running away to the woods in order to discover that I love people, friends.”

Especially whilst chopping wood, but also on long tramps around the ranch, Bass did eventually find a secluded space for reflection. Here the practical woodsman began to open up, revealing the soul of a mystic poet, as in this passage about falling snow:

“Anything I’m guilty of is forgiven when the snow falls. I feel powerful. In cities I feel weak and wasted away, but out in the field, in snow, I am like an animal – not in control of my emotions, my happiness and furies, but in charge of loving the snow, standing with my arms spread out, as if calling it down, the way it shifts and sweeps past in slants and furies of its own, the way it erases things until it is neither day nor night – that kind of light all through the day – dusk, several hours early, and lingering, lingering forever.”

Something about the valley seemed to facilitate this sort of free-flowing, deeply connected experience – he describes it as shaking “with mystery, with beauty, with secrets.” He is learning to live with himself, and to be comfortable in his skin;

“I used to think it was bad, a failing, that I had to be in the wilderness to be happy – away from most things. Now I’m starting to discover that’s irrelevant…It’s just the way I am.”

Not just comfortable with himself, but in the world, his experience of which had slowed through the slowing down of his life. And where Tesson’s experiment was always designed to end, though he did consider himself “changed completely” by the end of it, in the mountains of Montana Rick Bass believed that at the relatively young age of 30 he had found his resting place, what an ecologist might call his ‘optimum habitat’. That’s something that I think we’re all searching for, deep down, whether ours is metaphorical or as granite-solid as the Yaak Valley.

“If you go slowly enough, six or seven months is an eternity, if you let it be – if you forget old things, and learn new ones. Even a week can last forever.

Winter covers some things and reveals others…It’s taken me a long time to change completely – thirty years – but now that I’ve changed, I don’t have an interest in turning back. I won’t be leaving this valley.”