Saltmarshes are areas of coastal grassland that are regularly flooded by seawater. They form important habitats for wading birds and coastal flowers alike. 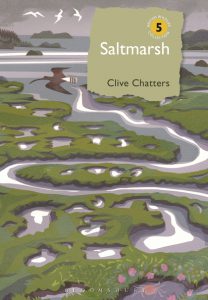 Published in 2017, Saltmarsh, written by Clive Chatters, is an in-depth analysis and detailed history of the management and impacts of saltmarshes in the United Kingdom. It is part of Bloomsbury Publishers’ British Wildlife Collection. Other titles in the series include Mushrooms by Peter Marren and Rivers by Nigel Holmes and Paul Raven. The author, Clive Chatters, is a naturalist who has worked for more than 35 years as a nature conservationist in the counties adjoining the Solent. He has held positions in both the statutory and voluntary conservation sectors, taking time off to assist in establishing the New Forest National Park. Author of a variety of publications, from scientific reports to magazine articles, he has also written several other books including Flowers of the Forest, an exploration of the botany of the New Forest through its history and rural economy, and Wild Hampshire and Isle of Wight, to commemorate the golden jubilee of the Hampshire and Isle of Wight Wildlife Trust.

The book is a hefty size and features a beautiful illustration of birdlife over a typical saltmarsh, through which the mouth of a river meanders, which was drawn by Carry Akroyd.

Inside, the book is littered with fantastic and interesting illustrations and pictures. For example, there is a cracking set of pictures which showcase the saltmarshes on the Solent spectacularly well. There is an excellent map which points out the locations of most of Britain’s saltmarshes, both the large and small ones.

The structure of the book is well designed and is broken down into different topics, such as regulations and the tides, as well as geography, such as the Solent and the Scottish Highlands. In the back of the book there are a set of wonderful tables about Special Areas of Conservation, followed by a comprehensive list of references and sources of further reading. This feature is great for any students who are wishing to use the book for their studies.

Chatters accurately portrays the vast landscape of the Solent and the flora and fauna in a captivating manner, which keeps you reading on for the next nugget of information. For example, there is an excellent section on cord-grasses (a variety of plant, of the genus Spartina). Chatters also comprehensively considers trends in modern conservation management, including the rejuvenation of saltmarshes. Furthermore, he contemplates what the future might hold for saltmarshes, which is important for us young conservationists.

I really struggled to find a fault in this book. It’s a great all-rounder with some outstanding features. I’d recommend this book to anyone who is either studying ecology/biosciences or is interested in saltmarshes as a habitat.

Lewis Mitchell is a 20-year-old wildlife conservation student from The Royal Agricultural University. His Instagram is @lewis_mitchell7 and Twitter is @mrlewismitchell. He is an amateur wildlife and landscape photographer, with his own Facebook page.