As I write this, I’m sitting on a virtually empty train as it rattles its way south to London. I’m sure it’ll get much busier once I get across the border, but for now I have enough space to stretch my legs and enjoy the landscapes of Scotland’s east coast as they flit by. To my left, there’s the rugged, wind-torn cliffs overlooking the sea: a seething mass of steel-grey, frothing angrily with waves. Oddly in contrast with this foreboding image are the rolling hills to my right; snow-capped and backed by the lilac, early morning winter sky. A scene straight out of a Christmas card. 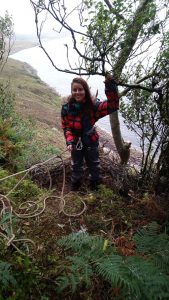 Me, as I abseil to see an abandoned sea eagle nest

2017 is drawing to a close and, as the trees are stripped bare of their leaves and the air grows chilly, it’s a time of reflection. We look back and analyse the year that has been – what were our achievements? Our best and our worst moments? And we look to the future, figuring out what we need to work towards and accomplish over the next 12 months. It seems only right that the theme for this advent series should be local conservation ‘now for nature’, as we look back on a year that sees some triumphs for wildlife, and a fair few failures (at the time of writing, our UK government just voted that animals are not sentient beings…words truly surpass me). And looking forwards to 2018, nature needs our help like never before. So, I ask the question: what are we doing now, in our everyday lives, to help nature? Not what will we be doing, in 20 years time or by 2050…but now.

For me, the majority of what I’m doing, now for nature, is research-based. I’m in the last eight months of my PhD in conservation – currently in the “denial” stage, where I happily ignore the fact that I have about 35 weeks to complete a doctorate. I work in the gritty, complicated field of conservation conflict, which, put simply, refers to the disagreements between humans over wildlife, including anything from their impacts to management objectives. Quite often, these conflicts aren’t even about the wildlife at all, becoming more about power, social status, clashing cultures and beliefs…among a multitude of other issues. The species in question is just a ‘symbol’ for something that runs much deeper. Unfortunately though, it is the animal that suffers: illegal killing, hunting, nest or den destruction, snares, poisoning…the list goes on.

Conservation conflict is fast becoming one of the biggest issues facing conservation today, and it occurs across the globe, affecting a vast range of species. Tigers in India, wolves in Scandinavia and the USA, elephants in Africa, snow leopards in Nepal – to name just a few. And it is notoriously difficult and complex to solve, thanks to all the layers of social, ecological, political and economic factors that bubble under the surface. I often imagine conservation conflict as an iceberg. What you see floating on the surface – a dispute over a predator munching on livestock, for example – is superficial. Underneath that is a massive mass of other issues, not often seen or discussed, but growing with every further dispute. Many of these we, as conservationists, still do not understand…but it is essential that we do. It’s been proven time and time again that you can offer technical solutions, you can alleviate the impacts of wildlife…but the conflict will persist. Because those deeper-rooted issues – the lower half of the iceberg – haven’t yet been resolved. A very good example is the divisive grey wolf, Canis Lupus. In Sweden and Norway, rural herdsmen feel that the reintroduction of the wolf is evidence of conservation organisations and government institutions ‘asserting their dominance’, and so illegally kill the wolf not only to protect livestock, but also to regain control (read Ketil Skogen or Erica von Essen’s papers, I’ll leave a link below).

I started out my career as a marine biologist, studying seal behaviour and the habitat use of minke whales in a place called the Moray Firth (a golden spot for cetacean spotting on mainland Scotland, look it up). But I fast came to realise that whilst ecology and the rest is vital, a huge part of conservation is working with people. Not just those like-minded, wildlife-favouring individuals you get on with, but those with different interests, opinions, values, wants and needs. You might not like what they do, disagree with their claims…but if we don’t figure out why exactly they do what they do, understand their concerns and where wildlife fits in with their lives, conservation objectives will likely fail. It doesn’t mean we need to give up on these objectives or stop fighting for them, it just means we help others to adapt – and allow conservation to adapt – so that we can ensure its success.

And that is what I’m doing, now for nature. I built a PhD along with my brilliant supervisors (who come from the fields of ecology, social science, and political science) and chose probably one of the most contentious cases of conflict out there: that between raptor and grouse moor management in Scotland. My research consists of travelling across country, speaking to gamekeepers, landowners, raptor monitors, conservation groups, politicians…trying to unpick a conflict that has been raging on for decades. It’s reaching breaking point, and something needs to change…I hope that my research will contribute to that change, whether it starts a different type of discussion or helps to drive forwards policy. Hopefully next year I’ll have a meeting with the Scottish government, to talk about the practical applications of my research. 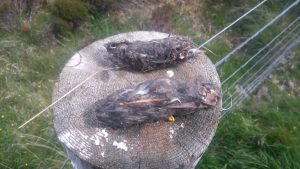 Golden eagle pellets I found in the field

Of course, I’ve tried to fit in ecology somewhere along the way. I’ve travelled to some of the most beautiful and remote corners of Scotland, in all types of weather. As the saying goes, the best way to understand someone is to walk a mile in their shoes – and so, I’ve assisted keepers on their rounds and been shown a different side to land management that previously I’d never seen. I’ve also helped raptor monitors carry out their work, having chats in between hefty hikes to observe raptors in the wild. This year alone, I’ve helped monitor hen harrier nests, clambered up mountains to try and find golden eagles, and abseiled off a sea cliff into an abandoned sea eagle nest to examine its contents (that last one really tested my vertigo – see the photo at the top of the blog). I’ve even had the opportunity of ringing shearwaters and releasing them off the side of the ferry to Skye. I try to help out as much as I can. In part, to understand people’s stories, but also to fulfil that need to get outside and experience nature, whilst doing something to help it thrive.

We can all be doing something now for nature. However big, small, mundane, epic…it all counts. Whether you’re a hardcore research scientist or a nature-friendly gardener, we all have a place and an opportunity to help. And as 2018 begins, I know I’ll try to do more. Will you?

https://www.youtube.com/watch?v=VJ47Ynp9VmU – Ketil Skogen’s awesome speech at the “Get Wolfed” conference, which gives a nice intro into wolf conflict

Isla Hodgson is studying for a PhD in conservation science at Aberdeen University, and is AFON’s Associate Director. She is also a freelance researcher for natural history film, most recently working at the BBC, and is currently writing her first book on British wildlife, to be published in Spring 2018. She is successfully distracted from all these projects by adventures with wildlife (and dogs).  Follow Isla on Twitter @isla_dawn, and check out her website www.wherethewildthingslive.co.uk.