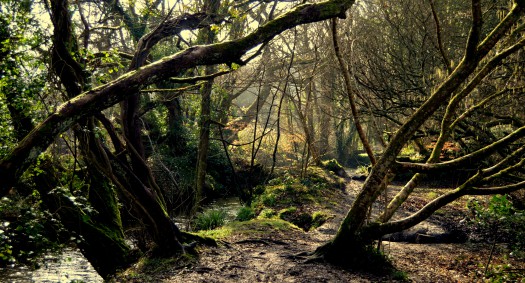 During this time of the year, trees take on a new significance for many people. The tradition of having a decorated tree in the home for Christmas is thought to originate from 16th Century Germany, however humans have used branches as decoration for thousands of years all over the world, notably by Pagans to ring in the winter solstice and celebrate the coming of spring, when Nature awakens from her wintry sleep. Trees were once honoured; they were thought to ward off evil and in truth, Pagans believed that cutting down evergreen trees was an offense to nature and despite popular belief, they would not have chopped one down to bring into the home.

Today, the Christmas tree bares little relation to ancient traditions and every year en masse, we grow trees, specifically to cut them down and display in our homes before throwing them away in the New Year – not the best way to honour nature at the beginning of the forthcoming 12 months.

Trees are vital to our planet. They give us oxygen, absorb carbon, filter our water and block ultraviolet rays. In many ways, the Pagans were correct – they do ward off evil. Trees also provide ecosystems to millions of different species and humans use them in everyday life; they are our houses, our cleaning tools, our communication tools and our heating systems. Yet for years, we have neglected their care and now, they are paying the highest price – trees across the world are dying.

As well as 15 billion being cut down per year to turn into various products for our use, trees are also suffering from pests, disease, increased temperatures and soil and air pollution.

Here in the UK, Elm trees have suffered losses of 60 million to Dutch elm disease and Ash, Larks, Chesnut and Oak trees have all suffered population decreases due to disease and pest infestation. Trading exotic species for landscaping and garden design has led to the introduction of various different pathogens and pests, despite strict inspection and controls. In some cases, there is little we can do to prevent problems occurring. Chalara, a disease caused by the fungi Hynenoscyphus fraxineus and leads to Ash dieback, is thought to have entered Britain via wind-blown spores. It has caused widespread Ash death across Europe and after its initial discovery in the UK in 2012; it has spread throughout Britain and become a very serious threat.

There have been cases of victory against infestation and infection. The Asian Long-horned Beetle (Anoplophora glabripennis) was caught early and seems to have been contained for now. These beetles wreaked havoc in the USA and Italy, causing damage to broadleaf trees. It was detected in Kent two years ago and controls in the area have kept it at bay, at least for the time being, although many are cynical that it will remain this way.

These are only two examples of issues our trees and woodlands are currently facing. There are many more and even though groups such as the Woodland Trust, JNCC and Forestry Commission are working hard to prevent further problems in Britain, the rates at which we are planting trees is not enough to make up the losses we are suffering. If we do not make adjustments soon, we may lose many more species to modern day problems.

So during this festive period, why not hail back to when we honoured nature and buy a British-grown, potted Christmas tree. Plant it out after the festive period and start 2016 with a resolution to help to protect the species which our lives depend upon.

Alex Pearce is a keen amateur wildlife photographer whose photos have been used in magazines and by the Wildlife Trusts. Having worked in zoos, she became a long term volunteer writer for Essex Wildlife Trust and has gone on to write for various magazines and websites. She is currently studying marketing and journalism. You can follow her on her website: www.alexandra-pearce.com.