I’m writing this at my boyfriend’s parent’s house is south London, surrounded by gray streets, bright lights, and the sounds of traffic and sirens. I want to write something about the sea, about the sense of peace it gives me. About how, though I’ve never been lucky enough to live by the coast, visiting the ocean always feels a bit like going home.

It’s quite hard to capture the magic of those moments. I can catch just a little spray of saltwater in the corner of my mind before it slips out of reach.

Perhaps this is part of the reason that the marine environment has always been the forgotten child of conservation. It is somehow easy to forget about the importance of the sea.

We are land dwellers after all, with a tendency to make everything about ourselves. Most of us do not visit the ocean that often. Around 60% of Britons visit the beach once a year or less, which is surprising when you consider that in the UK you are never more than 70 miles from the coast.

When we learn about the carbon cycle we learn about forests. Every child knows that oxygen comes from trees. Yet up to 85% of the oxygen we breathe is produced by plants that live in the ocean. The sea accounts for 99% of the habitable volume of the earth, and we’ve only explored 10% of it. It carries more than 90% of our trade, and around 50% of our communications. It is our primary source of protein and home to up to 80% of life on earth.  And yet – even amongst environmentalists – the significance of this underwater world often seems ignored.

Overfishing and plastic pollution are now on the public radar, but we still have a long way to go. At the recent climate conference in Paris, marine conservationists claimed a victory when for the first time in the history of climate negotiations the word “ocean” was included in the text. It is hardly inspiring of confidence that the major climate regulating force on the planet – responsible for absorbing over 90% of the extra heat generated by human activity and a third of the CO2 – has been left totally absent from these negotiations for so long.

I worry that this tendency to sideline the ocean is symptomatic of a wider problem. We have a liking for boxes, for segmenting issues into discrete packages. By putting our marine environment into one box, and climate change into another, we are ignoring a fundamental truth about life on our home planet. Everything is connected. Our life support systems don’t care what boxes we’ve put things in.

As part of a team of young ocean advocates, I helped to develop an infographic that was displayed at the “Ocean and Climate” pavilion in Paris during COP21. Our message was that by protecting areas of our marine environment we can build resilience to climate change. 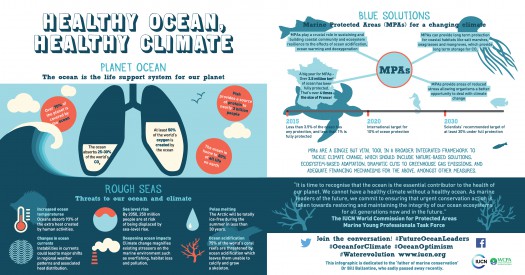 I hope that in so doing we’ve helped a little to raise awareness of the many ways in which our environment interacts. That by protecting marine biodiversity we’re not “just” doing something nice for sharks and whales and turtles. That we’re actually protecting ourselves, too.

This is truly a blue planet. I have promised myself that I will visit the sea more often in 2016. But even when I’m not on her shores, I will try and remind myself to give thanks for the gifts that the ocean offers me. Because wherever we are, whatever we’re doing, we are all connected to the sea.

Elisabeth Whitebread is a freelance environmental campaigner. She co-founded the Ocean Optimism movement, and is a member of the IUCN WCPA Marine Young Professionals Taskforce. You can follow her on Twitter at @ElisabethJane.