The Eurasian Otter is probably one of the most well-known and recognisable mammals in Britain, but how many people are actually likely to see one in their life time?

From being on the brink of extinction in the 1970s due to chemical pesticides destroying our waterways, the Otter has made a huge come back in recent years and can now be found in every county of the British Isles.

The more common river hunting Otters, found across most of Britain are nocturnal hunters who spend the night time travelling through the rivers in search of fish. They lay up in their Holt in the day, sleeping and grooming often on their own or with cubs in the spring and summer months. An Otter usually has a range of up to 11 miles of river but in places where there is a high population of Otters the territory is less. 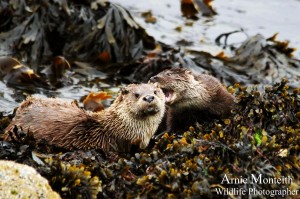 There perfectly streamlined bodies allow Otters to swim effortlessly through rivers at high speeds and their razor sharp bite is elegantly designed to capture fish with ease. They have in the past and remain to cause large problems for fisheries across the country when they break into the private lakes and feed on the supply of fish. Although the owners of the lakes complain and blame the Otters for a loss of money, they can’t really expect to steal the natural land where these Otters naturally hunt and not get any unwelcome visitors.

A famous area for Otters is in the Shetland Islands, where 12% of Britain’s Otter population makes residence. The Otters here hunt at sea, in kelp beds. Despite confusion, they are not Sea Otters but are Eurasian ‘river’ Otters. After every hunt they have to return to fresh water to wash the salt out of their fur, in order to retain its waterproofing properties. The Otters here have also become custom to hunting in the day time, due to less disruption by people. 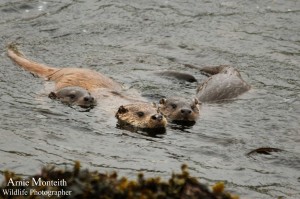 This has made Shetland a great location to spot the elusive Otters. However, from personal experience, they still are not easy to see. I spent 10 days travelling across the islands and despite a few far off sighting, I managed to watch a Dog Otter (male) for around half an hour on one day and to my luck, and perseverance, a mother and her two cubs playing in a kelp bed on my last day. They truly are the most amazing creatures to watch. Their playful behaviour and skilful hunting strategies are incredible. One minute I was watching a mother play with the cubs and the next she would dive under the water and emerge thirty seconds later with a crab to feed her young.

In my opinion, the Otter is Britain’s most amazing mammal. Their elusive lifestyle and behaviour prevents people from seeing them for much of their life, making them a species of people’s dreams and thoughts.

Arnie Monteith is a young naturalist and wildlife photographer, keen to conserve the natural world. He has been photographing and watching wildlife since a young age and hopes to one day become a wildlife cameraman filming wildlife all across the world.