When A Focus On Nature asked for pieces for their advent wildlife calendar, I jumped at a chance to represent a mammal that I’ve had a lifelong love for: the bottlenose dolphin.

I’ve always had a soft spot for the dolphin since reading stories about them as a child and watching them on documentaries. Who can’t recognise their intelligent gaze or slight smile? The bottlenose dolphin is the most well known and recognised dolphin species. It’s sleek powerful body is perfectly evolved to be a fearsome hunter or graceful acrobat. Any documentary covering ocean life is bound to contain footage of them hunting as a pod or play audio of their squeaks and clicks.

I’ve always been aware of their basic biology and ecology; I must have learnt it somewhere, somehow, yet it often feels like something I just know. At university I was given the chance to do a piece of literature based research on a topic of our choice. I chose to look at cetacean intelligence and social behaviour, with a particular focus on bottlenose dolphins. It is those areas that really make the bottlenose stand out for me and make it deserving of a place as a top British species. 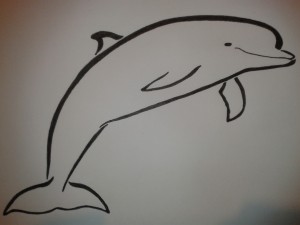 Bottlenose dolphins have large brains relative to body size; just like humans. The most favoured theory is that these large brains evolved as a consequence of living within social groups. Bottlenose social structure is complex and dynamic; often described as fission-fusion society. Individuals live in small groups in which numbers are often dependent on the sex and age of the animal. These groups interact with other groups to different degrees with changing circumstances, such as hunting or mating.

Living in a social group bottlenose dolphins need a way to communicate. They do this through the use of sound with whistles, clicks, squeaks and body slamming on the water surface but also through non verbal means; with the use of body posture, jaw clicking and bubble blowing. Different populations have been found to have separate dialects. Each dolphin also has a unique signature whistle which is used to identify themselves; a dolphins name if you will.

They are also considered extremely intelligent, being capable of self recognition and complex problem solving. Certain populations of bottlenose dolphins have been observed using tools, and then passing the knowledge of this tool use on to new generations. They’ve developed hunting stratergies particular to geographical locations and have even been observed working with human fishermen.

Having names, culture and a complex social life make dolphins strikingly similar to humans. I think that may be what draws us to them; there is no denying the intelligence in their eyes. We are so similar and yet so different; we envy their freedom beneath the waves, unhampered by the burdens that can so often weigh us down.

At this point I have a small confession to make; I have yet to see a wild bottlenose dolphin! It’s high up on my wildlife to see list but something I haven’t quite managed at this point in time. Despite all that I think it’s beauty and intelligence make it a more than worthy candidate for a spot as a top British species.

Beth takes an active interest in the science and ecology behind nature conservation; she has graduated with an MSci in Zoology from the University of Nottingham. She currently volunteers for the Wildlife Trusts, and hopes to work in research or practical conservation.

Her blog can be found here: bethaucott.wordpress.com