Of all of the wildlife found in Britain, one species stands out for me: the swallow balances beauty and finesse with an epic life strategy and ability to inspire like no other.

Even amongst non-birders swallows are known for their annual migration to Africa, indeed their return is widely regarded as a harbinger of summer. Many birds make this annual journey, but swallows do it with a certain touch of class. As other species quietly disappear overnight, the swallows gather in organised flocks, bowing telephone lines and filling the air with their bickering calls before leaving en masse in a frenetic burst one clear autumn morning. Unlike most of our breeding visitors that spend the winter in the equatorial region of West Africa, swallows make the long haul all the way down the continent to the Cape of South Africa. This 20,000km round trip, strewn with hazardous obstacles such as the Mediterranean basin, with its trigger-happy hunters, and the brutally unforgiving Sahara Desert is an astounding effort for a bird that could fit in the palm of your hand. 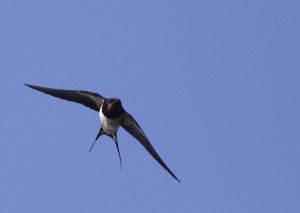 The fact that swallows are one of our commoner breeding species showcases their appeal to a wide audience. They are not a bird whose beauty we can only appreciate from the wrong side of a television screen or magazine, for half of each year they bring a graceful commotion to our skies that is almost impossible to overlook. A casual glance outside the office window, over a cricket pitch or alongside a motorway often reveals the distinctive shape of a hawking swallow, wings curved and tail feathers flexing like wire. With bursts of speed and dramatic manoeuvres, their aerial poetry can be enjoyed by anyone willing to risk a sore neck. Closer inspection rewards the more interested observer. Metallic blue upperparts that look like polished gunmetal reflecting every ray of sunlight combine with a crisp white belly to create a very dapper little bird, perching proudly on exposed wires safe in the knowledge that they can outpace all but the most determined of predators. 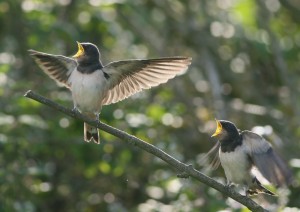 I feel that I owe the swallow a great deal. They have have shaped almost every aspect of my life, for it was swallows that made me a birder. As an impressionable seven year old I sat amongst oily lawnmowers and rusting rakes watching the antics of the pair that had chosen to nest in our garden shed, a delicate mud and straw construction balanced precariously on a greying oak rafter. I soon found that if I climbed up into the open stone windowplace, the adults would whizz just inches past my nose to deliver beakful after beakful of flies to their fleshy-gaped young, noisily begging in fierce competition with their siblings. Later, reading about their migration in a timely birthday-present book, I pictured the very same birds zipping between elephants and giraffes on the African veldt, I was fascinated. As I grew older and my birding developed from those first captivations, I followed the swallow. Travelling the world, I have worked in spectacular places and met so many wonderful people, all in pursuit of birds. Sometimes I wonder how my life would be panning out if it wasn’t for those inspirational little blue darts nesting in our shed, and I nod a silent ‘thank you’ to the first returnees every April. 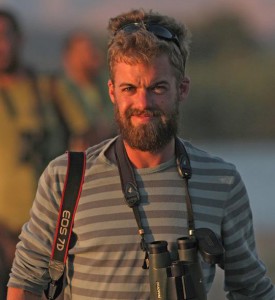 Joe Cockram is a lifelong birder and has spent the last 10 years working in conservation and. He now runs wildlife tours in his home county of Somerset and hopes to branch out to leading trips overseas.