The Dartford Warbler is an insectivorous, heathland dwelling member of the sylviidae family. They can be found across much of western Europe with their densest populations in Portugal and southern France.

In the UK they are generally restricted to the heathlands of the southern counties including Dorset, Devon and Hampshire where the New Forest remains a stronghold. Being insectivorous and permanent residents (i.e. they do not migrate), they are susceptible to harsh weather because their food source cannot survive. The winter of 1962-63 was one of the coldest ever recorded in Britain, causing the UK Dartford Warbler population to crash to just 10 pairs. Since then, their numbers have steadily increased and it is now estimated that there are 3200 pairs that call the UK home. 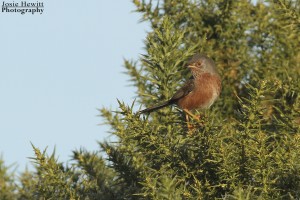 Their preferred habitat in the UK is heathland that is interspersed with gorse clumps. This is the perfect place for these shy and secretive warblers to seek out their prey, whilst remaining hidden from predators. Dartfords, as they are sometimes known, often share their heathland home with another insect feeding bird, the Stonechat. The two species are thought to have a symbiotic relationship whereby the Stonechat hunts from a low exposed perch, using the typical “perch-and-pounce” method (flying down to catch the prey on the ground then returning to the perch). In doing this it disturbs other insects which the Dartford then swiftly devours.

In appearance, the Dartford Warbler is a striking bird; their blue-grey upper parts blend subtly with their mahogany reddish underside. When in adult breeding plumage, the male’s orbital ring is a bright orangey red colour that, when combined with the white streaks on the throat patch, make this species something worth waiting for! 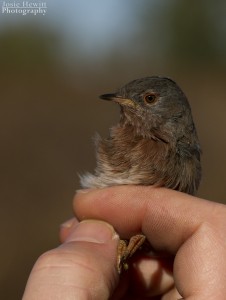 My first encounter with this charming and elegant species was only a short walk away from my front door and I feel very privileged to be able to see or hear these birds whenever I walk around my patch.

Intriguing me with their secretive ways, these enigmatic little birds are the reason I can spend hours walking the heaths on the coldest of days. Crossing my fingers, not only in an attempt to warm my hands, but also in hope that I will have a memorable encounter of a bird perched out in the open, perhaps singing its heart out, or perhaps not – I’m really not that fussy. Much as I would love to be able to say that such views are achieved on every outing, I cannot, as the flick-of-a-tail, split-second view of a bird disappearing into the depths of the nearest gorse bush, is the sight I behold most often. But am I ever disappointed with such views? Most certainly not, as it is these unexpected albeit brief encounters that add to their secrecy. Meanwhile, I know that in clumps of heather and gorse somewhere out there, Dartford Warblers are going about their lives doing what they do best, oblivious to their awesomeness (in my opinion anyway)!

Josie is a keen 15 year old wildlife photographer and bird watcher based in Hampshire. She is also a trainee bird ringer who very willingly sacrifices her weekends to get up before dawn, even if parakeets are a possibility. She hopes to pursue a career in conservation and ecology in the future.