Black Guillemots are seabirds that stand to a height of 32cm with a wingspan of 50cm. Like most other seabirds, Black Guillemots live out in the open sea for the majority of their life, they only come back to land for the breeding season. The bird is predominantly velvety black in colour with white wing patches and a deep rich red colour for their feet and the inside of the mouth. 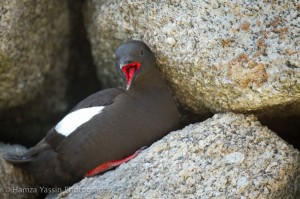 The first time you see a Black Guillemot, your initial thought would be something like, “Wow it is black and it is beautiful!” well at least that was my thought! I remember the first time I saw the Black Guillemots; it was on a late evening in July over in Dun Laoghaire – Ireland. I was walking the dog along the harbour wall and scanning the sea for any birds. All of a sudden, I heard a sharp “Seep” and a flash of black and white object flew past me and disappeared into the harbour wall! I ran quickly around to another viewpoint, to try and get a better look in the direction of where this flying bird was heading! To no avail, I could not spot anything unusual! I knew it was a bird, but didn’t see what kind. It was getting dark, the sun was setting so I resolved to come back the following day and have a better look.

The following day I came down with me camera; to my delight I could clearly see that the birds were Black Guillemots! The harbour wall had about five nesting pairs in it. They were all squeezed into little cracks and holes situated above the high tide-line and out of the reach of any human or land predators. I could see that some pairs were still doing their courtship dance; running side-by-side on top of the harbor wall repeatedly making the “Seep” calls and flapping their wings. Sometimes one of the birds would run ahead a little faster than its partner, and the partner would call and chase and catch up with it. Other incubating pairs were busy bringing food back to the nest for the incubating partner, or the newly born chick. The adults would come flying toward the harbour wall at a ridiculous speeds, not stopping for anything and straight into their nest hole. A strange behavior if you ask me, I would assume it is logic to slow down before entering the nest hole! I later figured out why the do not take their time approaching the nest; it is to avoid the harassment and steeling of their fish by other birds like the Herring and Black-backed Gulls.

What I gathered to be the male would come back with a fish, he would then feed the chick and rest on the outside of the nest. The female would then start repeatedly calling at the male, presumably coaxing him to go out fishing again. After 5 minutes of repeated nagging, the male eventually got the message. He gathered his strength, jumped out off the nest and headed out to sea. He returned 20 minutes later with another catch for his chick. 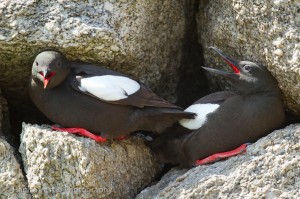 Black Guillemots are such pretty birds, I could stand all day admiring them doing their courtship dances and bringing food back to the nest. Unfortunately, the tide was coming back in and I was in the way. I think Black Guillemots deserve more recognition. Compared to Puffins, Guillemots and Razorbills, Black Guillemots do not get enough of the limelight. Do not get me wrong, these are all beautiful little birds, but I just think more fuss and attention needs to be made about the Black Guillemot. It is time for them to shine.

Hamza Yassin is an aspiring young wildlife photographer and film-maker. He assisted in the production of our Birdfair film, being an invaluable asset to the team with an artistic eye and infectious enthusiasm for both the job at hand and the wildlife on display. View his photography here: https://www.facebook.com/hamzayassinphotography?ref=hl