Termed ‘divers’ in the UK, these are a group of birds of which all living species are within the genus Gavia (family Gaviidae and order Gaviiformes – for those who know their taxonomy). One stunning species that this genus can be proud of is the Great Northern Diver. They are one of the largest species of diver, with a characteristic wide, large beak. Sitting low in the water, quoted as ‘gracefully swimming’, it really is quite a sight to see such a beautiful, well-sculpted form in UK waters. 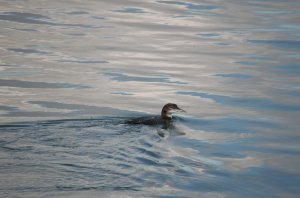 The great northern diver is found in two distinct areas depending on the time of year. The species will breed in Greenland, Iceland, Scotland and North America in the summer, showing off striking black and white breeding attire, whereas it over-winters on sea coasts or in large lakes in Africa, south Europe (were AFON were lucky enough to see it) and in the southern USA.

Due to it’s weight and shape, the bird takes time to gain momentum for take-off, needing a long ‘runway’. Landings are also difficult as their legs are positioned at the rear of the body. Diving ability is greatly increased by this leg-location, but it makes walking and landing rather tricky. They use their (sometimes sizeable) bellies to skim the water for some time as they land, slowing them down without using their feet. Its usually ungainly landings are compensated by stunning plumage and feather colouring. Once in the air, their annual flights covering hundreds of kilometres are completed with apparent ease. Neck outstretched and calling a certain tremolo (perfect for identification): both swimming and in flight it is a beautiful bird. 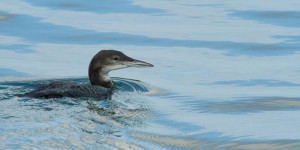 Between 700-2,000 pairs visit us on our UK shores, making the most of our lochs, ponds and rivers – we saw one recently in Poole Harbour of southern England, near the coast just where it should be. Many of the people in our company considered this the bird of the day. The species faces some predation of its eggs, despite building nests in hard-to-reach places such as islands. Eggs and nestlings are known to have been taken by other predatory birds, mink, foxes – even (ironically) large fish (the hunted become the hunters!). Adults face much less predation, but some have been killed in America by sea otters and bald eagles. The divers fight back though, sometimes attacking the predator by rushing at it – possibly attempting to impale it through the abdomen or the back of the head or neck – impressive!

As you might expect with that beak it mostly eats fish – up to about 30cm in size – along with large invertebrates (mmm…. yummy exoskeletons). To catch these meals, the great northern diver can dive to up to 60cm. Like all other divers, they are specialized to catch fish in many ways (including these dives), raising the likelihood of their survival. Adaptations to this fishing lifestyle include the striking (both to look at and in action) thick, bold bill. Hunting skills are helped by being specialized and powerful swimmers – in fact their chicks are able to dive only two days after hatching! 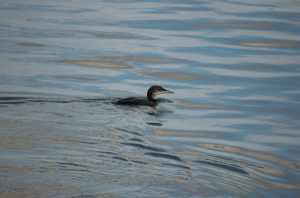 Chicks are able to sit on their parents’ backs, riding around to get to know their environment and their current territory. This is rare to see, as they spend most of their time as solitary birds, swimming further out to sea than most divers.  Originally, the somewhat spooky, haunting call of this species gave rise to the name ‘the loon’, still used in America. Having been spotted consistently since 1666 in the UK, we hope we keep getting to see this stunning species on British shores. 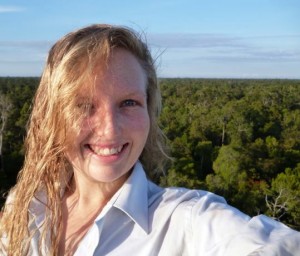 Thea is a conservation ecologist working with international based NGOs. Her work has been mainly based in Indonesian and UK habitats. With experience in science communication, eco-educational outreach and as a member of AFON, she hopes that accurate on-the-ground studies, along with fantastic 21st century photography, filming and pioneers of conservation can tell the stories of the most biodiverse places on earth.