Barn Owls can be described as ‘huge, pale moths’ or even ‘Ghost Owls’ as they are often found at dusk hovering over grassy fields and can just be a blur, seen one second and then gone the next. Their plumage consists of dusky yellows, creams, whites and browns. They can seem rather secretive and in old folk tales they were associated with darkness and mystery. They are usually found nesting in places such as clock towers and old barns.

They are strong, powerful creatures and can produce a wide range of different calls, including hisses, screeches, snores, wails and moans, but their main call is a piercing shriek. Because of these noises, in literature they were commonly associated with evil. For example, an Owl’s wing was a key ingredient in the witches brew in Shakespeare’s Macbeth.

Barn Owls often live up to 4 years; however the longest recorded age is 15 years (recorded in 2011). The number of nest records is 422. And the clutch size is often 4-6 eggs, which are incubated for 32 days by the female. The chicks fledge by 53-61 days. Barn Owls often have up to 2 broods per year. 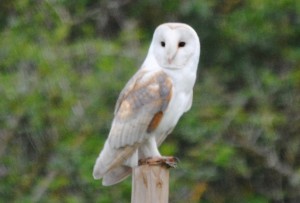 I find the Barn Owl so captivating because of the elegance when it is hunting, and love its simple beauty. To me it seems so mysterious, especially when you catch a glimpse of it at dusk and we have yet to find out so much about this gorgeous creature. They swoop down to the ground to collect their prey (mice, shrews, voles, insects or even small birds). They then grab it and soar off into the distance to find a peaceful spot to eat, often swallowing their catch whole.

It has a big role to play in managing our environment as it is a natural controller of the rodent population in farmland. However, its habitat is in decline and we must find out more about this wonderful species and take care of it to ensure that future generations do not miss out on the chance to enjoy this bird.

Barn Owls suffered from a lot of superstitious persecution until as recently as the 1950’s as people misguidedly used their carcasses to ward off storms. They have a charming heart shaped facial disc which is designed for silent searching and pouncing (an owl hunting technique). Harsh, snowy winters affect the Barn Owl more than most birds as the owl struggles to find its prey if the snow gets too deep. This can cause the Barn Owls population to decline. It is estimated there are currently around 4000 pairs of barn owls in Britain. It is given amber status on the list of endangered species.

I am a 13 year old who has an interest in wildlife and in particular birds. I believe we can all do more to save our natural world for future generations. I am involved in carrying out surveys for The BTO and I’m currently training to ring birds and would like a career in ornithology.