NatureWatch is an online wildlife documentary series, lead and produced entirely by students. Based at Penryn Campus, the crew is made up of students from both the University of Exeter and Falmouth University – its creation was heavily inspired by the BBC’s Springwatch and the incredible biodiversity that Cornwall hosts. Cornwall is an amazing place to live and an even better place to study the natural world, and, to be honest… we just wanted to show that off! 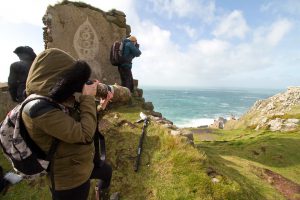 Me whilst filming NatureWatch at Botallack Credit: Matt Wall

It all started from one meeting, in a cramped seminar room, with a group of incredible, awesome people. The original idea was to feature our gorgeous Penryn Campus (because it’s awesome) in a one-off episode, but when we started discussing ideas for species and habitats to feature, we soon started to discuss what could be done across Cornwall. From choughs to basking sharks, and from the Lizard Peninsula to Bude Marshes, we soon realised that Cornwall’s biodiversity could fuel an entire series. And so NatureWatch was born!

I have been the project leader and production coordinator of NatureWatch since it first began in June 2015. I am responsible for what some people may see as the tedious areas of production, including organising meetings (shout out to Doodle Poll – big love/hate for you), the crew and all filming logistics, but also the ‘cooler’ parts such as leading episode planning, presenter casting and co-directing. I absolutely love it. I am involved in every aspect of the production and, as a result, I see ideas grow from a simple suggestion in our first meeting to a finished piece. I’ve had the absolute pleasure of working with a team of brilliantly talented students. It’s because of their hard work, dedication and passion for sharing the natural world that NatureWatch has succeeded. None of us were skilled filmmakers when we started, but we have all learnt from one another and we have seen the quality of production improve dramatically since our first episode. 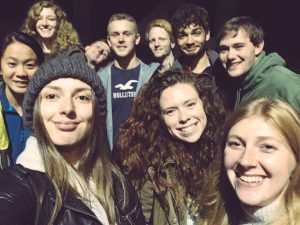 A very happy NatureWatch crew after spotting and filming beavers on the River Otter.

The best part of NatureWatch is when we finally get out in the field to film. We are all students with a love for wildlife, and I have been able to experience some of the most incredible moments with a fantastic group of people. Through this we have all become great friends and even better conservationists. From sharing the water with a 20-foot basking shark, to observing English beavers on the River Otter, these NatureWatch moments fuel our passion for the natural world, and remind us that it is worth fighting for and conserving. 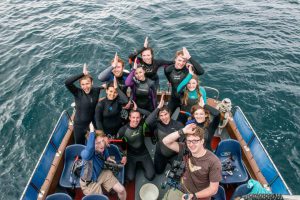 The crew after swimming with a 20 foot basking shark! Credit: Josh Raper.

I am a firm believer that communicating science is vital to achieving successes in fields such as conservation, and that film and TV are powerful platforms which can be used to achieve this. Because we study the natural world, we are aware of the species and habitats that require our protection, but not everyone is. From inspiring a new generation of conservationists (big up Planet Earth), to raising an interest in local species, natural history productions, no matter the scale, have the potential to show wider audiences that there is something out there worth protecting and fighting for. That in itself is, in my opinion, invaluable to conservation. For people to care for nature, they need to experience it, and the beauty of film is one way of providing that.

NatureWatch’s next project is a road trip from North Cornwall to Land’s End, the crew are hoping to feature as much of Cornwall’s biodiversity as possible!

If you want to share even just one aspect of nature, and you want to have an incredible time doing it, grab someone who shares your passion, pick up a camera (even your phone!) and get capturing our brilliant world.

Emma Dwan is currently studying for an MSc in Biodiversity and Conservation at the University of Exeter, Cornwall campus. She is a founding member of NatureWatch and has been the project leader and production coordinator since its initial setup in 2015. Twitter: @Emma_Dwan