In the 2015 General Election, only 43% of 18-24 year olds turned out to vote, according to market research organisation Ipsos Mori. It’s easy to argue that young people have lost faith in our political system, feeling disconnected and unrepresented in a fragmented democracy. In schools, politics as a subject is not resonant in our education system, so for many the concept is alienating or too complex to engage with. Politics wasn’t taught at my school until A Level, when I had already developed passions for other subjects.

Then we reach voting age and, bursting with hope and enthusiasm, we are informed by our elders that our views are naive, immature and unrealistic in our expectations of how the country should function. Showered with cries of ‘You don’t remember Britain in the [insert decade here] – you don’t understand!’, we are expected to feel spoilt and fortunate that houses are now impossible to buy, the environment has been destroyed, and university fees have rocketed. Perhaps if our elders had fought harder for their ‘naive’ principles when they were our age, our environment would be healthier and more than a quarter of Britain’s birds wouldn’t be facing extinction or decline. Our views are dismissed, as if we didn’t have 60, 70, 80 years ahead of us in which to live through the democratic choices made in our youth.

Perhaps most crushingly, even when we do cast our vote and engage with democracy, our elected government is so often a resounding disappointment. The current Conservative government came into power under the leadership of David Cameron, who famously claimed his coalition with the Liberal Democrats to be ‘the greenest government ever’. Goodness – where to start? From scrapping support for offshore wind and solar subsidies, to ditching zero carbon homes and threatening to bring back fox hunting, they have made it quite clear that green policies are buried at the deepest, darkest layer of the priority pile. In 2015, Amber Rudd made a U-turn on the Conservative promise to ban fracking on SSSIs, a decision that exposed many of our most precious wildlife habitats to shale gas drilling. And when Lancashire County Council listened to the community and refused permission to extract shale gas, their decision was overruled and local democracy was cast into redundancy.

So when we hear young people are disinterested in politics, is anyone surprised? For political parties with no regard for the welfare of young people or the environment, this ‘voter fatigue’ is fantastic news. They can continue on a path of destruction without fear of being challenged; if we believe the future of our country is so desolate, it can be so difficult to muster the energy required to fight back. Even when we decide to cast our vote, where can we look for hope when the results are announced? 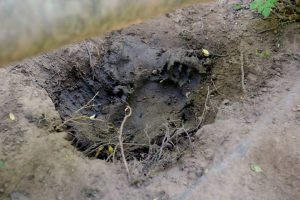 A beaver pawprint along the River Otter

I believe the answer lies in our NGOs – Non-Governmental Organisations like the Wildlife Trusts, RSPB, BTO, WWT, Butterfly Conservation, Plantlife, Woodland Trust, National Trust and Marine Conservation Society, among others. Regardless of the ongoing political squabbles in Westminster, these organisations work tirelessly to protect our natural places, landscapes and species, often working with minimal funding and resources. And not only do they work within the tight restrictions set by government, they often fight back for us and overturn terrible political decisions. I recently visited the River Otter in Devon to see the wild beavers that were sneakily released there by ‘persons unknown’. Beavers are native to Britain, but (quelle surprise!) we hunted them to extinction 400 years ago and they haven’t graced our rivers since. When DEFRA found out about the beavers they immediately tried to remove them, but thanks to campaigning from the Devon Wildlife Trust and the local community, they changed their mind and the beavers have been allowed to stay – for now. Through local support and fundraising for the Trust, normal people overturned the government and facilitated the return of an iconic mammal to our countryside.

The irrefutable fact is that voting is the most important thing young people can do to influence the world around them. We must engage with politics in the most effective way we can; you don’t have to watch BBC Parliament twenty four hours a day, or memorise every point of each party’s manifesto. We must simply decide which party best aligns with our views, and try to engage others in conversation about what matters to us. But when the vote is cast and the results are in, then we can take the next best step. Join your local Wildlife Trust or environmental organisation, and help them to protect our landscapes when our elected leaders simply won’t put the effort in. Volunteer, campaign, build dead hedges, write blogs, make tea, talk to others and keep an open mind. You may feel like your voice is worth little in a world of overwhelming bigotry and greed, but it is essential you shout above the noise. But there is work to be done outside the political sphere. Relish your chance to vote and remember – the polling station is just the start!

Tiffany is a writer from the South Downs, where she works on an educational farm and writes a monthly wildlife column for Hampshire Life. Her first book Food You Can Forage will be published next spring by Bloomsbury, her second best achievement after winning third prize at the Singleton Rare Breeds Show with her goat Sorrel. Follow her on Twitter: @tiffins11 and via her blog: tiffanyimogen.com