“…this has become an annual pilgrimage to Stamford at the start of winter to meet with a diverse range of people from all over the UK (and a few from overseas).”

“New Networks for Nature is a broad alliance of creators (including poets, authors, scientists, film makers, visual artists, environmentalists, musicians and composers) whose work draws strongly on the natural environment.

Its formation grew out of dissatisfaction with the low political priority placed upon nature in the UK. Today our wildlife and landscapes are so often evaluated exclusively in environmental scientific terms when, in fact, they are a resource at the very heart of human creativity. (By this we imply no criticism of the key role played by science in understanding our environment. It is the notion of scientific exclusivity that we seek to challenge).

The multiple impacts of place and the natural world are central to the nation’s cultural life. New Networks for Nature wishes to reflect these truths and celebrate them.”

I first attended this event in 2013, when as a new member of A Focus On Nature I was awarded a ticket to the 2 day “symposium” (they don’t like conference). Last year I was also given the opportunity to represent AFON, so this has become an annual pilgrimage to Stamford at the start of winter to meet with a diverse range of people from all over the UK (and a few from overseas).

This year opened with a fantastic evening with poet Ruth Padel asking questions to Germaine Greer. I must confess to not really knowing much about either of these women previously, and was certainly curious to learn more about Germaine’s connections with Nature. I was surprised to hear her stories about her little patch of Australian Rainforest, purchased from a dairy farmer and now well on its way to being restored. Cave Creek, 60 hectares of Gondwana Rainforest in south-east Queensland is home to a multitude of species, including many which took up residence shortly after Germaine was told it would take several lifetimes to restore the Rainforest to what it once was. Her method of working is “if you (re)build it, they will come” and she would appear to have used this ethos to encourage tree-frogs, bowerbirds and bats into her garden. Two stories stuck with me from the evening – the first of the bird which made an appearance when she was first viewing the property, “a sort of crow in fancy dress” and this connection led to her purchasing the farm. The second image is of her sitting on the veranda reading with two wild snakes sharing the space with her. This feeling of Place and Belonging was the underlying theme of the symposium and it was touched upon by many of the speakers over the following two days.

The first morning opened with an inspiring talk and short film by John Aitchison about how people connect with nature through particular places. His short film, Finding Beauty (https://www.youtube.com/watch?v=imagjrQ3r3A) was particularly poignant to me as I grew up on the West Coast of Scotland, where he is based and featured many familiar species and scenes from my youth.

This was followed by Ruth Padel, Jo Shapcott and Pascale Petit talking about their poetry and doing some readings. Not something I would normally choose to listen to, but the wonderful diversity of New Networks is that it opens your eyes to new ideas and ways of appreciating Nature.

After a coffee break to allow for book buying and networking, it was back to the theatre for the Big Debate between Tony Juniper and George Monbiot, two outspoken Conservationists who have had their fair share of media attention recently on a variety of topics. I must admit to being slightly disappointed to Rewilding not being mentioned, but the discussion bounced between the two and the audience, who helped fuel the debate with thought-provoking questions and opinions. 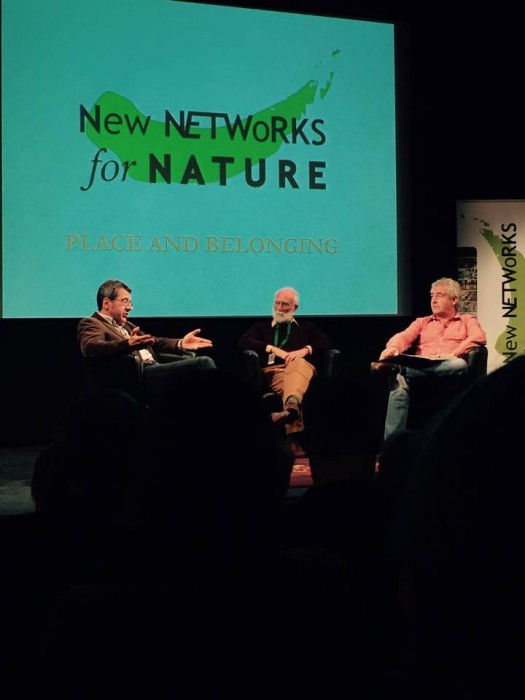 After a yummy, locally sourced, organic lunch we were treated to a musical performance by Barron Brady. This led to an afternoon of Invertebrate Delights, chaired by Stephen Moss and featuring Matt Shardlow from Buglife, Peter Marren looking at Butterflies and Helen Smith from the Fen Raft Spider Project talking about the less popular members of the Natural World. Another coffee break, then a quick show by artist Esther Tyson before an excellent session on Sound, Story and Place, chaired by Geoff Sample and featuring Malcolm Green and Jo Joelson.
The day ended with the traditional visit to the Tobie Norris pub in Stamford. The best networking is always done over Pizza and a Pint (in my case, Orange Juice) and I spent the evening with fellow AFON member Peter Cooper, film-maker Nick Upton, spider-lady Helen Smith and bug-man Matt Shardlow and his son. The New Networks group commandeered the pub and by the time I left we had taken over most of the 3 floors and engaged with many of the locals wondering why their local was over-run with Naturalists!

The second day started with a poetry reading by Matt Howard, followed by an excellent presentation on The Science of Place, looking at case studies by Richard Fortey (Palaeontologist), Elspeth Kenny (Zoologist) and Hannah Mumby (Ecologist). I was particularly interested in Elspeth’s talk, as she was looking at relationships between breeding Guillemots on Skomer.

This was followed by a session chaired by Carry Akroyd and featuring Mary Colwell, Matthew Oates and Andrew Foster, giving readings of their work in relation to a Spirit of Place. The emotional ties that each of the contributors had with their chosen Place were plain to see and I was reminded by the Welsh word “Hiraeth”, which has no direct translation in English but can be used when talking about homesickness, or the sense of longing and nostalgia for a place. I get this feeling whenever I return to a place which holds memories for me, especially places I’ve lived or worked over the years and made a connection with the local community and landscape.

After another delicious lunch, there was a short session by Rebecca Jewell, a visual artist whose work I’ve admired for a few years. She using screen printing to produce historic images on feathers and has exhibited around the world with her visually captivating work.

The final session was a discussion about Communication and Conservation and featured Barbara Young, Mike McCarthy, Louise Gray, Germaine Greer and Mark Avery. There was talk about the use of Social Media and how the Press always use Nature stories as the “And finally… (Insert cute story here)” feature. The panellists largely agreed that Conservation and Environmental stories should be in the mainstream news, but that always portraying the world in a negative light (extinctions, climate change, pollution etc) is harmful. There were some examples from the audience of how they communicate their work to a wider audience and these points led to further discussions about the power of the press.

The symposium closed with a musical finale by Barron Brady before Mike Toms revealed exciting news for the 2016 event. The next Nature Matters symposium will be held on the 22nd to the 24th September in Cambridge, as part of the Cambridge Conservation Initiative. This will not be a permanent move but will hopefully open the doors to new people who have not attended the event before.

I look forward to seeing you all there!

Susan Jones is an Education Officer at the Welsh Mountain Zoo, a bird ringer and a conservationist. You can follow her on Twitter here: @WelshLassy1989