On Saturday 4th November, the Game and Wildlife Conservation Trust hosted a first in conservation agriculture. Young Farmers and AFON members, from all realms of farming and conservation interests gathered under one roof to learn about and discuss issues surrounding the future of farming and wildlife in the UK. People from Exeter right up to the hills of Yorkshire gathered, and guided by the likes of Rob Yorke, the Game and Wildlife Conservation Trust, the National Federation for Young Farmers, and a few other innovative people in the farming industry, came up with some fantastic solutions to issues in conservation agriculture. 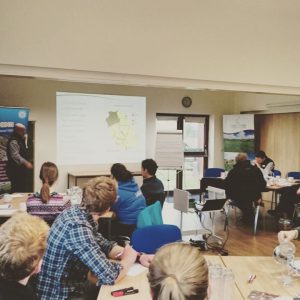 Briefly, it is worth noting the jagged history between conservation and farming interests in this country, that has made the Future Wildlife, Future Farming event feel like such a turnstone in the industry. Farming has and probably always will be one of the most important industries for our nation, providing food for our plates of consistently good quality whilst providing jobs for 1% of the population. It has also changed a great deal in the last century, with leaps of innovation driving a more profitable, efficient, and productive system. These changes, unfortunately, have been recognised to drive declines in some farmland species that are dependent on this kind of habitat.

Conservationists noticed the decline in farmland species and so became increasingly concerned about the interaction between changing farming practices and the struggle for wildlife to thrive in a modern British landscape. Unfortunately, this concern manifested itself in some cases to create a huge amount of friction between different people who care about farming and wildlife. These clashes were rarely a solution to either party in disputes over land management, and in many cases clashes have prevented a good solution for wildlife and farming to thrive together. A few hotly discussed topics still leave scars, with long-held disputes still able to resonate bitterness across some groups.

Because of this history, I felt proud and privileged to be part the group at this event, full of the next generation of farmers and conservationists. Rob Yorke explained at the beginning of the event that we should not look at ourselves as belonging to groups of farmers or conservationists either, but as individuals all with the same interest in looking for answers to issues facing conservation agriculture. I think this point was taken on very well by everybody and that really set the mood for the day. 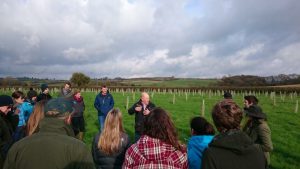 After a brief introduction, Jim Egan, Head of Development and Training at the Game and Wildlife Conservation Trust, led us on a tour of the Allerton Project’s farm in Loddington. We gained an insight into the Allerton Project, with its long-term goals in researching sustainable agricultural practices for nature, that began back in the early 1990’s. We were educated on their tillage systems, research, and cooperation with the local community that all aimed to promote conservation agriculture across their farm and the rest of the UK. Careful management has resulted more wildlife, good yields and even in a reduction in the size of their tractors to alleviate compaction on their delicate soils, which is monitored regularly by their small research team. Clever ways to get the most out of the government’s Countryside Stewardship Scheme for wildlife and the farm were discussed, where the least profitable and most delicate areas of the farm are set to one side to serve for wildlife alone, where they can be less intensively managed. These little nuggets of interesting information kept the audience entertained, all with nothing but the assistance of a shovel to find some worms – it was a fantastic.

After a splendid lunch, we were given brief introductions into a few more corners of the agricultural industry. Emily Norton from Norton’s Dairy in Norfolk explained to us how she achieved fantastic welfare across her herd, whilst keeping profits going and producing the best quality produce for her customers. David Goodwin from a mixed arable and sheep farm in South Hampshire then explained how his much larger farm achieved results in conservation agriculture across his 730 acres of land. Quentin Clarke gave important insights into the organisation he was integral to, LEAF, and how they aimed to promote sustainable farming across the country. Finally, Ed Barker discussed his Arable farm and the Pig Association, providing valuable insights into both areas in the agricultural industry. 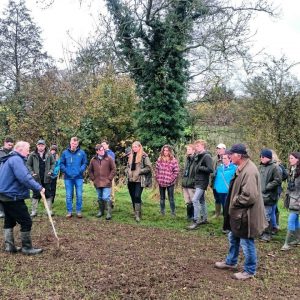 After the speakers, conversations flowed across the room, with probing questions, and intelligent answers. Countryside Stewardship was discussed in detail, with new views put across on how it could be improved in the future. Some people disagreed on how this could be done – although all individuals agreed that its current state was not satisfactory! The controversial topic of yield vs. biodiversity on the land was also discussed, leading onto thoughts about how much a farmer will do to manage his land for conservation, and how much help he would need to do it. Finally, a discussion between conservationists and farmers would not be complete without Glyphosate, badgers and buzzards – all of which were handled well, and with all individuals in the room happily exchanging parcels of information about these controversial topics.

The whole day was very refreshing, exciting, and gave me a great deal of hope for the future of farming and wildlife. Ben Eagle organised the event with the help of the Young Farmers, and I cannot thank everybody involved enough, for the organisation and running of a very successful event.

Georgie Bray works as Assistant Farm Manager at the RSPB’s Hope Farm. She grew up on her family’s arable farm in north Essex, and completed 1st class Masters Zoology degree from the University of Nottingham in 2017. She hopes her experience will continue to develop to help to make a real difference in conservation agriculture in the future!