In 2016 the Field Studies Council (FSC) were awarded a grant from the Heritage Lottery Fund to develop a project to address the lack of people able to identify and record difficult species groups, with a focus on the West Midlands and South East regions of England.

We spent nearly a year consulting with a wide range of professionals and volunteers involved in the natural history sector and developed a project that we hoped our funders would deem worthy for the £1.2 million we were asking for. The consultation findings told us where we should deliver our proposed training courses and events, the importance of digital advancements, to focus on invertebrates and that the training should be structured to provide opportunities to both those new to species identification and recording and those already active within the biological recording community. 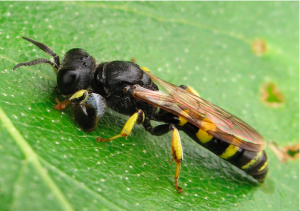 Wasps, such as Crabro peltarius, will be a focus species group of the FSC BioLinks project (c) N Jones

However, something else soon become very clear. Professionals and volunteers alike expressed their concerns that not enough young people were joining the ranks of biological recorders and it is widely recognised that a generational skills gap is developing in field and identification skills, largely due to changes in the way biology and ecology is taught at all levels of the education system.

We wanted to make sure that young people had a voice and invited A Focus On Nature to attend one of the consultation workshops. Megan Shersby and Ryan Clark kindly obliged and the results were very interesting. It became quite clear that many young people do care about nature, very much so. And they also identified very clear barriers to young people becoming integrated into the natural history community. What’s more, Megan and Ryan offered fantastic ideas for solving these issues that could be incorporated into the FSC BioLinks project.

Interestingly, the points made by AFON were not always aligned with barriers and solutions regarding young people suggested by consultees outside the young adult demographic (18-25 year olds). For example, social media was dismissed by some older consultees as pointless and a price tag of £50 for a training course was deemed affordable. Whereas young adults told us that social media was an essential means of communicating with them and anything over £10 would need to be weighed up financially. 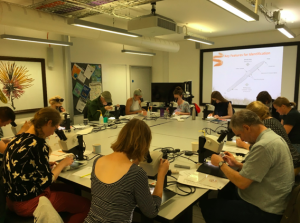 This highlighted to us that young adults needed to be a key focus of FSC BioLinks and need to be involved in determining how we reach 18-25 year olds. It also told us that providing opportunities for young adults is not enough, we need to find ways to ensure that they become fully integrated into their local biological recording communities and build relationships between the younger and older generations. A further consultation was undertaken with AFON and we submitted our project plan to the Heritage Lottery Fund with our fingers crossed!

In June 2017 we received a phone call confirming that our grant application was successful and the project was launched at the beginning of 2018. We didn’t forget the lessons we learned from our younger consultees:

Finally, we’d like to invite you to get involved with the project:

Book on one of our training courses: www.field-studies-council.org/individuals-and-families/fsc-biolinks-courses

Keiron Brown is the BioLinks Project Manager at the Field Studies Council (FSC).The FSC BioLinks project team can be contacted at BioLinks@field-studies-council.org