Winter isn’t always seen as the most comfortable time to watch wildlife, but if you can steady your binoculars in trembling hands before the sun prematurely sets at 4 o’clock, birding in the coldest months of the year can prove the most rewarding. Although many species have migrated – quite rightly in my opinion – to Europe or Africa in order to escape the falling temperatures, others fleeing the even colder northern climes of Scandinavia and the High Arctic gather here in their thousands, producing some of our most interesting and beloved species.

Living on the outskirts of London, easy access to truly wild spaces sadly isn’t a reality for me. However, if you know where to look, wildlife oases can be found in the most unlikely of places. The WWT London Wetland Centre is a whopping 42 hectare reserve set against a backdrop of tower blocks and concrete in the south-west of the city. Formally home to Barn Elms reservoirs, the site opened in 2000 and has since provided refuge for a huge variety of species just minutes from the heart of the capital.

Hailed by Chris Packham as “one of the most important conservation projects of the past century”, the wetlands are home to a staggering 180 species, supported by a network of pools, scrapes and reed beds. Its huge diversity of wildlife, including nationally significant overwintering populations of gadwall and shoveler, has even earned it the status of Site of Special Scientific Interest (SSSI). With such a strong résumé, I had to go and explore this exciting location myself and on a mercifully mild day in December last year I did just that.

The reserve itself was in keeping with the surrounding city, with smart gravel paths leading to modern, well-kept hides. The most impressive of these is Peacock Tower, a three-storey structure with 360 degree views of the reserve. It even has its very own lift for those of us who had enjoyed a few too many sandwiches! From the top level of this hide we slowly scanned our binoculars across the water, calling out shoveller, teal and gadwall; we even saw a pair of long tailed ducks stopping over on their journey north.

But as lovely as they were, we hadn’t come to see ducks. Our prize species on this particular day was a bird that truly epitomises winter in British wetlands: the bittern. It’s an intriguing bird to watch, but first you have to spot it, camouflaged amongst the golden reeds. To maximise our chances we needed the best location, and so we headed to the Headley Discovery Hide, where they had been regularly sighted over the past few days.

No sooner had we focused our binoculars than there was a distinct rustle in the reedbeds just 20 metres in front of us. A hushed surge of whispers cut through the silence as fingers pointed eagerly at the reeds. Moments later another rustle. Then another. They appeared to be getting closer.

Suddenly, a fresh round of whispers broke out and arms shot up simultaneously, all pointing in the same direction. Out through the reeds appeared a beautifully-elegant chestnut bird, streaked with subtle black markings that made it almost impossible to see. 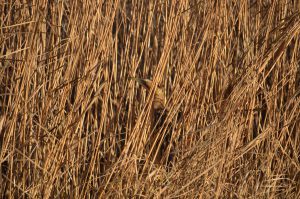 It moved awkwardly, yet in such a calculated manner that almost made it appear graceful. Stretching out a wiry, yellow leg, it trampled down a patch of reeds and gently transferred its weight across. Then it proceeded to wait, halfway up the reeds, staring intently into the water below. We had found our bittern!

This was the second time I had seen a bittern, the other being at Minsmere two years previously, yet this is a bird that is always special to witness. It stood remarkably still for what seemed like hours, but was in truth closer to ten minutes, before creeping back into the sea of gold from whence it came.

We left the London Wetland Centre that day a very happy bunch indeed, our birding appetites well and truly satiated. Along with a huge variety of our common resident species, we were also treated to great views of a couple of very special migrants, all on a reserve surrounded entirely by urban sprawl. It’s undoubtedly up there with some of our most established and treasured wetland sites and really has something for everyone. Well, as long as that something is feathered!

Russell Barnett is a 21-year-old filmmaker and photographer, with a BSc Conservation Biology at the University of Exeter’s Cornwall Campus. You can follow him on Instagram @russellebarnett and check out his website.