I was recently out with a class of year 8 pupils looking at the salmon run, very near to where I am living in British Columbia. Each year across coastal British Columbia, millions of salmon make their way upstream to their spawning grounds, where they end their incredible lifecycle that has taken them across the Pacific Ocean, and face to face with predators such as bears, wolves, eagles, orcas and sharks. At the salmon run site, you can easily see more than 50 bald eagles gorging on salmon, bears making frequent visits to the area, and you can get up close and personal to the salmon themselves as they use every drop of energy they have left fighting to spawn the next generation. It really is a wildlife spectacle and it takes place about 20 minutes from the centre of town. 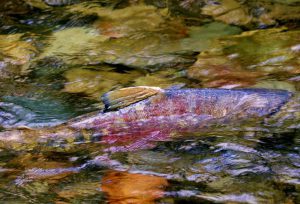 Yet, as I am standing with a group of young people, born and raised just 20 minutes away, I ask the question ‘who has been here before?’ – 7 out of 26 hands go up, and I am actually surprised, that was a higher number than last year. It has taken me nearly 4 years to really get my head around this issue, the level of disconnect between people and their local environment is at times staggering. But what is perhaps most interesting about this issue, is that almost every single time, I hear, ‘I cannot believe I haven’t been here before, I’m definitely coming back’ or ‘how did I not know this was here?’. 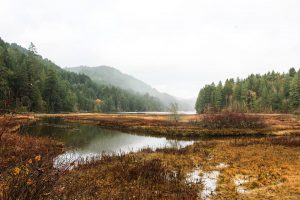 I have experienced this in the UK as well, I am from Loughborough in Leicestershire, and one of the best wildlife experiences in the area is the red deer rut, that you can see every year up close at Bradgate Park, just 20 minutes from the centre of town. But again, when I have done wildlife education presentations about it, young people in Loughborough are oblivious that it is even happening on their doorstep. Yet many of them knew that the stag rut was a thing, they just had never thought it could be happening near them.

A lot of young people are interested in wildlife and nature. They have stories and facts from documentaries, TV programmes or Youtube videos. They can tell you about the big animals of Africa, and the issues that they face, they know what endangered means, and how extinction impacts an ecosystem, they know about the great whales and the Amazon rainforest and often they know about conservation projects that are taking place globally. Yet wildlife and conservation seem like something that only exists in far-away places; it takes a bit of effort for someone who has never really looked at wildlife locally to find examples of wildlife projects on their doorstep, and often young people do not go looking for it. 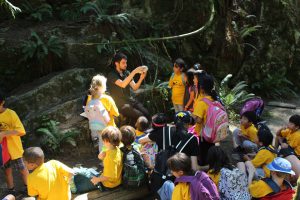 The final example I’ll give of this is at a Middle School in Loughborough. The school is based in a very multicultural area, and many of the students had never had any real connection with local wildlife. I went to the school and did a presentation on the birds and wildlife we were getting at that time, the kids were really interested in some of the migratory species that have travelled hundreds, sometimes thousands of miles, to Loughborough. So, we went out into the playground to look for some redwings. After spotting a few redwings and finding a fox den, a couple of the participants noticed two swans flying over, and they all just went mad, over two swans, something that many birders would not look twice at. To them this was the first time they had really looked at the wildlife at home. This was a real lightbulb moment for me personally, that we should never underestimate the importance and the impact that local conservation and wildlife can have in engaging and inspiring ‘new’ people with nature, and how vital local wildlife can be in bringing people from all parts of a community together.

My ambition is to present to more people and tell more stories about local conservation and wildlife, whether it be in the media, the classroom or online, to have a positive impact on the wildlife that I love. But it doesn’t really matter how you do it, whether it is through blogging, writing, drawing, photographing, filming, presenting, tweeting or simply talking to your peers. By sharing the incredible work that you do or the wildlife that you love locally, you are making a difference and really can inspire the next generation to love local wildlife and get involved in local conservation.

Connel Bradwell is an award-winning Wildlife Education Manager and presenter from the Loughborough in Leicestershire. He currently works for Northwest Wildlife Preservation Society on Vancouver Island, Canada, where he teaches thousands of young people in both Canada and the UK about the land conservation! He spends his free time exploring British Columbia’s west coast and the East Midlands, as well as working in orca and migratory bird research. You can follow him on Twitter: @connelbradwell and his blog: www.talkofthewild.net.