Perhaps the most frustrating time of year for any young naturalist is the May exam period. It seems unfair then that students should be stuck indoors drowning in endless lecture notes whilst outside the days grow longer, warmer and sunnier and wildlife abounds. Yet despite the dreaded exams, I still managed to make the most of my local patch and May turned out to be a blast! So, here’s a throwback to those fantastic morns and eves exploring the Falmouth Patch with my housemates Will and Ted last May. 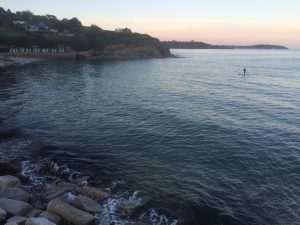 Our patch walk begins at Swanvale Nature Reserve, a tiny area of wet woodland which is a magnet for flocks of finches and tits. Swanvale leads towards Swanpool Nature Reserve, a brackish coastal lagoon which provides solace for a number of wildfowl – including swans – throughout the year. Passing Swanpool beach we head along the short stretch of coast path towards Pennance Point, a small peninsula which curves into Falmouth Bay. From here the panoramic views are fantastic. At night it’s particularly special as bonfires glow on the beaches below, St Anthony’s Lighthouse pulses across the Bay and moonlight ripples on the sea’s surface. It is also a perfect place to put a moth trap. Not only is there a huge catchment area but there’s a decent mosaic of habitats including gardens, woodland, hedgerows and meadows.

Our first morning checking the trap was particularly memorable and certainly set in motion a brilliant month of mothing. The weather was delightful and the clear blue skies were filled with hirundines. Dozens of swallows swooped and twisted over the surface of the lake. High up, groups of martins gathered, busily whirring and chattering. Among the cacophony we heard a sound we had both been longing for – the striking shrriii shrriii screams of swifts! These were our first swifts of the year and we delighted in watching their sleek, aerodynamic bodies whizz through the air. Swifts are truly incredible birds but they don’t stay with us for long, vanishing by mid-August. I made sure to marvel at them every day, knowing I’d miss them when they go. From deep within the reeds that fringe the lake we heard an abrupt, scratchy and jittery song. Somewhere, well-hidden was a male reed warbler, another herald of summer. Our morning was topped off by a moth known as the Devon carpet (Lampropteryx oregiata), a nationally scarce moth which favours wet woodlands such as those at Swanvale. 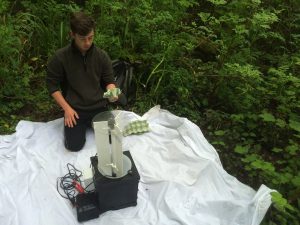 Our evening walks to set up the trap were arguably even more enjoyable than the mornings. Obviously a night out on the town is not the wisest thing to do when you have exams looming, so for us dusking was the second best option. Dusking is when you head out after sunset, equipped with a head torch, a net and some pots and see what you can catch. Admittedly we often had a few drinks beforehand. Not only did this take the edge off the exam stress, but it’s all the more fun chasing after a speedy noctuid when you’ve got a few ciders down you! With a rapid and irrational flight noctuids are notoriously difficult to catch. The most intense chases had us scrambling through brambles, running down slopes and through meadows, leaping over fences and swiping around wildly with our nets. These chases often ended out of breath and empty handed. The standard technique for catching a moth is with a quick swish of the net followed by an upward flick to stop it from escaping. Unfortunately I often happened to be standing in the wrong place at the wrong time. It became an unspoken tradition that at some point during the night I would be walloped in the face during Ted or Will’s swish stage of the procedure!

On our first night we only caught one noctuid, an angle shades, but that’s not to say we were disappointed with our efforts. Between us we caught 21 species of moth, including some understated beauties such as the aptly named pretty chalk carpet.

On subsequent nights we continued to catch new species on the wing. One of my personal favourites is the peach blossom, which has soft pink and cream petal markings on its wings.

With exams finally behind us the mothing reached its apex on the 31st May. It was calm, overcast and humid, so the conditions were perfect. As we expected, the moths came out in force. On top of the regulars such as silver-ground carpet, brimstone and brown silver-line we caught a number of new stunners. This included the blood vein which is marked with a striking red cross-line on its wings and the light emerald which is a very attractive shade of green. 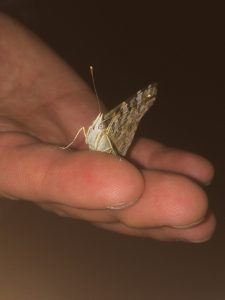 The night was topped off by a really unexpected and exciting catch. We were sitting on a bench admiring the views across Falmouth Bay when a large Lepidoptera suddenly started flitting frantically around our heads. It was a painted lady butterfly! This was unusual to say the least. What was a butterfly doing out at midnight? Our best guess was that it had just arrived from the continent, having made the 100 mile journey across the English Channel! 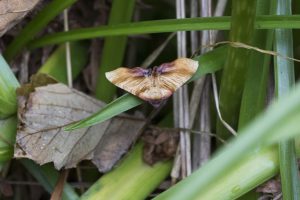 The next morning the trap was brimming. It was our best catch yet and there were many species I hadn’t seen before. This included a scorched wing, which looks as if it has been gently toasted over a fire and an alder moth which is renowned for having a crazy looking caterpillar with bold yellow stripes and long club shaped appendages! There were also a multitude of pugs, carpets, ermines and beauties to delight in.

I now can’t wait for May to come around again. Not for the exams of course, but for the month of moth madness that is sure to ensure!

Jack Barton is an undergraduate Zoology student at the University of Exeter’s Penryn Campus and spends a lot of his spare time finding and photographing the wildlife around Falmouth. He is an avid volunteer: regularly lending a hand on local sites or travelling further afield. Following his graduation next year, Jack hopes to pursue a job in conservation, helping to make the world a richer place for both wildlife and people! Follow him on Twitter @jackhbarton and Instagram @jackbartonphotography.