Robert Bosisto was recently put in contact with Luke Sutton, through his A Focus On Nature mentor Ed Drewitt. Together, they set out for a day of voluntary fieldwork, contributing to the growing wealth of knowledge of the most iconic of birds, the Peregrine.

As a keen birder who has wanted to give a bit back to conservation and make a difference for the future I was delighted to get in touch with Luke Sutton, a leading member of the South West Peregrine Group and raptor researcher. Luke and a small dedicated group of people study and monitor the local Peregrine population and spend countless hours in the field checking on breeding sites throughout the year in their own time. After exchanging emails for a few weeks Luke kindly invited me to join him for a day’s fieldwork on his local patch in South Devon.  He would take me out onto the cliffs and show me how he collects prey samples and identifies them to further his research on a coastal peregrine diet in South Devon.

An early start was in order as I Left home in Cornwall to rendezvous with Luke at his home so that we had plenty of time to visit the sites that he had in mind. After meeting and greeting each other we soon set off to the coast. Our first port of call was one of his diet study sites, a very scenic strip of coast typical of places where I had suspected that Peregrines nested nearer to my home in Cornwall. High, emphatic cliffs accompanied with a roaring sea and a howling wind added to the atmosphere. From here Luke took me to a well used plucking spot (an area used by the Peregrines to perch, rest and eat recent kills they had made). Luke’s trained eye soon started to find various feather remains of different birds that he quickly bagged up for a closer look back home later in the day. I would have had no chance of seeing such subtle clues on my own and  just looked on in awe as Luke did his best impression of a detective and continued to pick up several more prey remains from the area. Unfortunately as the weather got worse  and the driving rain soaked us to the skin, for safety reasons we headed back to Luke’s house for a well earned cup of tea and a dry off. 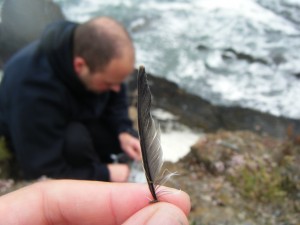 A linnet primary found as Luke and I perch near a sheer cliff; Peregrine study is certainly not for people scared of heights!

As Luke began to dry off the feathers gathered during the morning he showed me his collection of remains found at the site in the previous two years, all carefully archived with the dates in which they where found. I was astonished at the variety of different birds the Peregrines had taken. From Tawny Owls and Little Grebes to Blackbirds and Linnets the collection posed in my mind many fascinating questions such as why would they take such a diverse selection of species and just how do they go about catching some of these things! It reminded me why I loved birds and the natural world so much. Take a bird as well studied as the Peregrine and yet there are still so many things we don’t know about its habits and lifestyles. Only through the dedicated work of people like Luke do we find out more about these creatures and hopefully help protect a bird that is still sadly much persecuted.

To finish off the day we visited Plym Bridge Woods to take a look at the well watched breeding pair of Peregrines and their young .Being  open to the public and manned with volunteers and telescopes it gives a great opportunity to see the birds close up without causing disturbance and is well worth a visit. Luckily for me the chicks are now 31 days old and close to fledging so they where very active and I had great views of my first Peregrine chicks.  A great way to end a very enjoyable and fascinating day out.  I am looking forward to helping the South West Peregrine Group in the future on my own in Cornwall and would like to thank Luke for taking up his time and of course my AFON mentor Ed Drewitt for encouraging me to contact him in the first place. 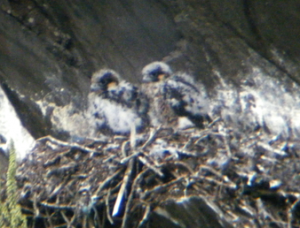 The two Peregrine chicks frequently flap their wings as they get nearer to fledging from the nest.The adults chose to use an old raven nest this year, a habit I am told is pretty common.