Saturday, November 18th – Day Three. An inconspicuous looking town in Lincolnshire, at the time I could not help but think Stamford to be an odd choice for an event that had featured the illustrious Sir David Attenborough in November 2016. A frosty morning had greeted me at the platform, all the while following me until I found my way to the local Arts Centre. 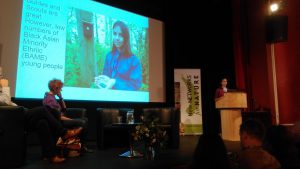 Due to kick off in earnest at 9:20, there was no surprise that the venue was empty at 8:30, apart from the occasional scurrying member of staff. Purely a reflection of my “fish out of water” feeling, I twiddled my fingers for a solid ten minutes before being approached by one of the cheery and equally helpful organisers.

Next thing I know the third, and final, day of New Networks for Nature. It had come to a close and I was on my way back to a welcoming Norwich via the all-too-familiar Peterborough rail station.

Okay, I get it – this is meant to be a recap. Sure, the day was a blur and resulted in me sending e-mails and messages to various representatives and academics asking, for instance, “who we had been seated down at lunch with”. Sometimes my memory is appalling, but many of you may already have come to realize this and my appreciation for Post-it® notes.

To recap, the day started wonderfully with a brief introduction by the esteemed elder statesman of the steering committee, Jeremy Mynott.

Steve Waters, whom I had the pleasure of meeting during my compulsive morning rounds at the venue, was up next. Though it is fair to say this was no solitary speech. Rather, Mr. Waters, provided everyone who had not managed to grab a morning cup of tea or coffee with a refreshing burst from his 2009 play “The Contingency Plan”. Split into two acts – On the Beach and Resilience – Waters chose to showcase an extract of the latter, which melded behind-the-scenes political discussion between government civil servants and scientists with tense dialogue surrounding the subject of climate change and, most notably, sea level rise. 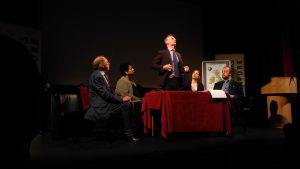 Even in the short, roughly 15-minute, scene we witnessed, Mr. Waters had conjured up an emotive discussion that made me feel as though the characters had been transplanted from a David Cameron-era meeting room in Westminster. My favorite, Christopher Casson, the Minister for Climate Change, provides an excellent anecdote to many of today’s leaders who wish to be known for their proclamations against a particular hazard, whether climate change, terrorism or otherwise.

In light of comments by the head UK scientific advisor, Colin Jenks, Casson’s line refers to the concept of the precautionary principle. Jenks had been belittling data by fellow glaciologist, Will Paxton, that painted a dire picture of future sea-rise affecting England.

The following snippet involves Tessa Fortnum, Minister for Resilience, also sitting in on the meeting, pressing for Casson to largely sideline Paxton’s research and consequent warning:

TESSA: May I ask why?

CHRIS:I’m not prepared to be the Minister who consigned Nelson’s Column to the North Sea.

There was a rousing applause from the audience – one nearly expected that to be the final line of the excerpt. And you can bet on the passage that it was. Yes, figures like the fictional Christopher Casson are to be admired for all their moments where they righteously wield what many of the people in the audience might consider enviable: the power to dictate policy.

Yet for all the misgivings on the current state of nature that may have been holed up within each participant, representative or Stamford resident, they showed more interest in absorbing the power of discussion – infused with intrigue, enthusiasm and positivity.

For instance, James Parry, a Norfolk writer and editor, gave a detailed account of one of the great female naturalists of the early 20th Century, Emma Turner. His documentation of her sheltered, yet fascinating, lifestyle in eastern Norfolk had me contemplating why natural history – where stories and winding narratives are commonplace – had not been taught in schools to a greater degree.

That question was addressed after the second panel adjourned, in which a member of the audience asked Mya-Rose Craig, easily the youngest attendee as a 15-year-old student, what her thoughts were on incorporating natural history into the GCSE curriculum as a subject.

Mya-Rose has campaigned extensively for, in her own words, “making nature relevant” not only to youth, but to Black, Asian, and minority ethnic (BAME) UK citizens.  She seeks to help BAME youth interact with nature and wildlife, while championing diversity as a core value to any and all institutions that value wildlife.

As such, her answer to the lady’s question did not stray from her focus to include, not segregate. The immediate knee-jerk reaction was to say “why yes”, but Mya took a different approach. Either she must get asked a lot about school curriculum or she’s an incredibly quick-thinker; to be fair, I reckon both.

Her response was as much about the stigma attached to it, as it was to suggest, “why not incorporate natural history into existing curriculum?”

Resonating with me, Mya noted how more choice may not necessarily imply more uptake. During high school in Germany, I had wanted to take a class called “Environmental Systems and Studies”, or ESS for short. Unfortunately, the devaluation – it provided fewer ‘credits’ than the other science modules – meant I chose biology instead.

Natural history – a veritable goldmine for the imagination, as well as a reminder of what nature has been and can be capable of – inspiration.

The second half of the day took on more of an artistic and imaginative twist than I could have ever expected. From the sheer brilliance of Harriet Mead’s work, alongside the occasional flashback to watching American Pickers, to the vivid story-telling of Dafydd Davies-Hughes, we capped off the day with one of my favourite pastimes: music.

Conferences: they aspire to bring people from diverse backgrounds with a unifying purpose or underlying interest together. And in unity we all listened to the didgeridoo hum. Courtesy of Mike Edwards and Sam Lee, there was an overwhelming ‘feel-good’ vibe that resonated throughout the auditorium.

Until next year Stamford and a thank you to all that made the conference a memorable one!