At the beginning of 2016 I wrote a post for the AFON blog where I talked about 2016 being the year I really got to know a site – a year of the patch. Well that year is now over so I thought I should look back and update you all on how it went.

For the last twelve months I’ve had the privilege to be a Reserves Officer for the Wildlife Trust for Bedfordshire, Cambridgeshire and Northamptonshire. I’m lucky enough to work on reserves across all of Bedfordshire but I have been mainly responsible for Houghton Regis Chalk Pit. This old chalk quarry was left unmanaged for decades before the Wildlife Trust took over managing it for wildlife five years ago.

I’ll admit now that there have been some bad moments with vandalism, litter, off road bikes and people wanting to be destructive, negative or just not caring about the beautiful spaces around them BUT the good times have more than made up for them! I’ve grown in confidence in my abilities and planning practical work has become easier as I’ve gotten to know the site. I always say that Houghton Regis Chalk Pit is unique and it has been an absolute joy to care for the place over the last year, seeing it change with every visit there.

When I first visited the Chalk Pit back in December 2015 it was grey, cold, muddy, and to most people probably one of the most bleak and uninspiring places that they’d seen. Luckily for me I could see enough to not be frightened away and actually feel rather excited about the site.  Settling in to the new job involved lots of time spent getting to know my way around the site where I quickly learnt that all the humps and bumps and different habitats can make it feel like you’re in a million separate locations and not just one once abandoned chalk quarry. Winter was truly upon us when I started and I regularly saw the site decorated in frost with the marl lake looking particularly stunning frozen solid. The water levels eventually rose so I could finally see the seasonal lake in some of its former glory (water levels were to become a slight obsession/unsolveable puzzle to me!).

Eventually the weather started to turn warmer and the Pit started to show me a hint of what it would become over the summer. I was thrilled to find my first Snowdrops and Primroses on site; the first real signs that Spring was on the way. Before the trees gained their leaves I regularly spotted the pair of foxes among the trees upon one of the banks and knew that there would be cubs soon. Every new bit of wildlife I found at the Pit was like seeing a species for the first time again. I audibly squealed in delight the day we found Smooth Newts in one of the ponds; my first amphibian at the Pit, and later took some strange maternal pride in the fact that I had froglets before lots of places in Bedfordshire even had frogspawn. I traded Snipe for Coltsfoot in the reed bed; the more I saw of the later the less frequently I encountered the former. Every day I visited the site it was different. 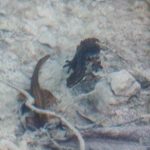 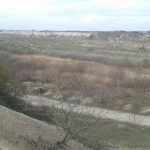 Spring saw the fluffy willow catkins turn yellow and become a vital food source for bees. A couple of Ring Ouzels put in an appearance in April which led to me running from one end of the site to the other with a cup of tea in hand on a break from installing some steps with volunteers! A bank by the marl lake gave me my first Bee Fly sighting of the year and I was beyond ecstatic the day I saw my first butterfly in the Chalk Pit – a Small Tortoiseshell.

I quickly learnt just how much light levels can affect the mood of the site. Even when the flowers are in full bloom and the trees covered in leaves a cloudy sky can make the place seem brooding and miserable. Throw a little sunlight onto the chalk however and the place is transformed; beautiful and bright with the cliffs gleaming white!

In May the upper levels of the Chalk Pit turned yellow with the vetches; Birds-foot Trefoil, Kidney Vetch and Horseshoe Vetch. I was away for a few days at this time so when I was back the change seemed all the more magical. Accompanying the change came the butterflies! I scampered up slopes chasing Dingy Skippers and was almost taken aback at just how tiny Small Blues are – I’d forgotten they were so small. My top count was over 100 of the little beauties!

Soon Swifts were screaming overhead and the trees and reed bed filled with warblers. I was fascinated by the way one wildflower species gives way to the next; how the yellow becomes white, becomes purple and the shades of green changed. Swollen-thigh Beetles crawled over the Wild Rose flowers and the Ox-eye Daises glistened with raindrops over the very wet early summer. 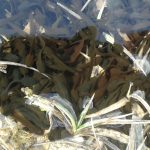 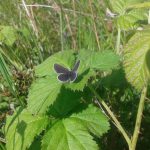 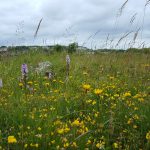 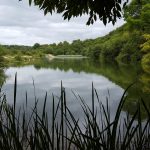 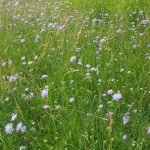 I became slightly obsessed with water levels; they just don’t make any sense in this place! On days when you would think the ponds would hold water they’d be bone dry and then days when you think there’d be nothing there at all there was water?! I could stomp round in just my boots in March but in June needed wellies to wade across certain areas of the reserve. The ponds on the higher levels (with no obvious source) seem to hold water all year round whilst those on the lower levels near to seeps in the cliffs seem to empty in the blink of an eye. It’s all very strange and confusing but has meant I spent an awful amount of time over the last year just staring at water and the things that can be found in it – that isn’t a bad thing!

Over the year I’ve felt a sense of pride with the site, loving everything about it, even the weird stuff! I marvelled at some strange weird goo that had just appeared on the floor one day that turned out to be Nostoc – a cyanobacteria (That was a completely new taxa for me). In the south west corner of the reserve, water seeps down the cliff, through lots of mosses and lichens and into the Marl Lake. It’s almost completely hidden, tucked away into the corner but is another thing that adds to the uniqueness of the place. There’s a population of Freshwater Leeches that live in the pool by an overflow pipe from a nearby fishing lake and I took great delight in fishing a couple out to show the off to some children who were taking part in an Explorer Backpack day.

If I had to choose just one highlight from the year then it would have to be the Chalkhill Blues. I’d been told to expect clouds of butterflies but being told what to expect and experiencing it yourself are two completely different things. I would be walking along my transect route, admiring the Marbled Whites and the colours of the wildflowers, all fairly calm and peaceful. I’d take another step and the grass would erupt! Flashes of blue and mottled brown launched themselves skywards from the vegetation. They twirled around each other, dashing in front and behind me, flicking their wings in a frenzied burst of movement. It wasn’t possible to count them; I would just have to press the clicker frantically as my eyes moved from one butterfly to the next.

Nothing can prepare you for the beauty of being surrounded by hundreds of butterflies! I’d freeze in the excitement, relishing the fact that part of my job was being there to count them (yes I get paid to count butterflies!!!). The Chalkhill Blues would settle down, some settling back into the vegetation, others flying a little more sedately ready to burst into a frenzied swarm with my next step. Even just writing about it now brings back the stupid happy grin to my face. It was amazing! 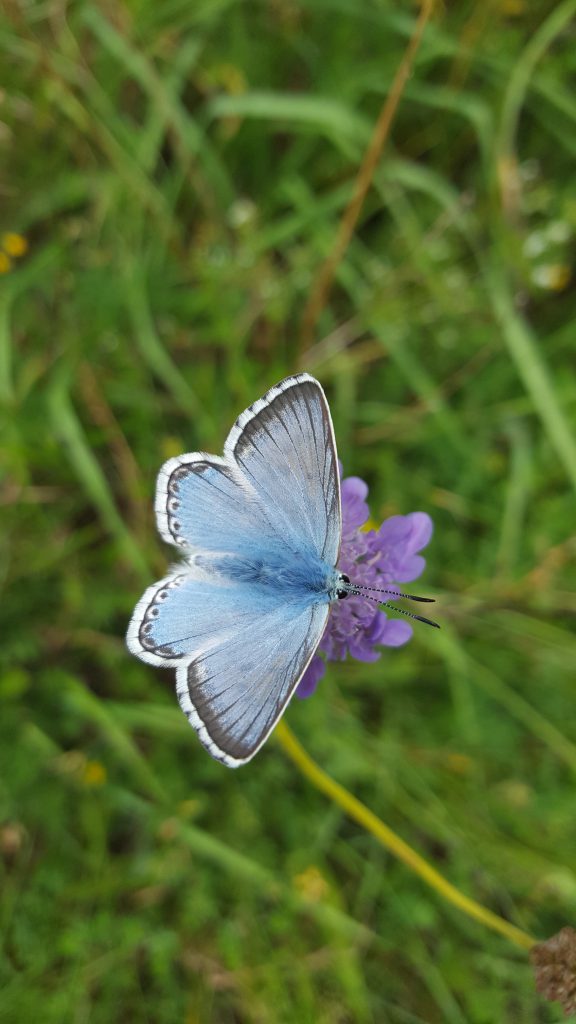 One spectacle I did miss was the Chiltern Gentians being in bloom. I caught the first few in flower but then spent ten sun filled days on the Isles of Scilly (so I can’t complain too much) and when I returned they’d all gone over! I have been re-assured that they put on quite a show and even now it’s possible to see the dead stalks and it doesn’t stretch the imagination too much to see the carpet of purple in the minds eye.

Slowly the summer passed and the Pit began to take on its Autumn colours. I love autumn and last year’s seem to stretch out for a while making the Pit look lovely in red and orange and yellow. Wildlife sightings slowed down drastically though I did start to see the Kingfisher down by the marl lake on a regular basis. I was pleasantly surprised to discover that a colony of Ivy Bees had made themselves at home in the bare chalk alongside one of the sets of steps.  The first time a Snipe erupted from beneath my feet nearly scared the life out of me! But it was great the see they’d come back and that the cycle of seasons was still working. Autumn means the start of scrub clearing and I could approach it with more confidence now having seen what areas needed to be protected the most from encroaching hawthorn and bramble. 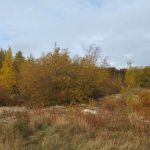 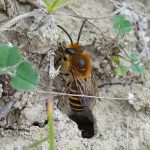 Suddenly a week or so before Christmas the Pit was back to pretending it is a grey dull lifeless place. My boots are once more caked in soggy chalk and I’m slipping and sliding my way around the site. To the unknowing eye it looks pretty desolate. But I know better! I know which nook the stock doves will nest in, where the foxes prefer to hide, which stretch of grassland harbours the most butterflies and where the Sparrowhawk prefers to hunt. Over the last year I’ve had the chance to get to know the ins and outs of this unique place and it’s been amazing. I love this little Chalk Pit, quirks and all!

Beth Aucott is working for the Wildlife Trust of Bedfordshire, Cambridgeshire and Northamptonshire as a Reserves Officer, and is a committee member of AFON. You can follow her on Twitter at:@BethAucott