Amy Robjohns is a second year Environmental Science student at the University of Southampton. She has been interested in nature from a young age, especially birds, but developed a greater interest in bird watching when she was 12. More recently, Amy realised that a career in conservation was what she wanted to do so has been a trainee bird ringer since 2012, and is working towards a C permit. She also began volunteering for the Hampshire and Isle of Wight Wildlife Trust in 2013 for 6 months as part one of the conservation work parties, something she plans to continue outside of term time.

Summarising my recent trip to Shetland is tough as I had a wonderful time with fantastic memories. I’m really grateful to A Focus On Nature and Shetland Nature, as well as their sponsors, including Swarovski Optic, Opticron and Wildsounds,  for giving me such a great experience. I’d never really been up north before, so to get the chance to go birding on the northern most island in Britain (Unst), during autumn when it’s at its best, has provided me with new experiences and unforgettable memories! I think the 31 lifers says it all, but it’s not all about the new birds. It was great to see mammals too – Otters and Grey & Common Seals – and to see just how different it is in Shetland. 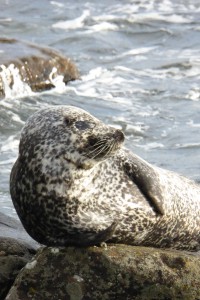 Seeing Grey and Common Seals right outside Tesco in Lerwick was quite something, made even more amazing by the fact that we’d already seen Black Guillemots, a Siberian Rubythroat, Yellow-browed Warblers, Merlin… [the list could go on] and it wasn’t even 10am by the time we’d seen all this (and more) and done our weekly shop! 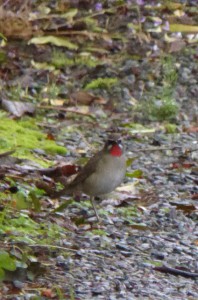 I was then still rather amazed that we continued to travel north… We’d already spend about 10 hours on a train and 14 hours on a ferry, yet there was still more land to cover! The scenery was also something I was struck by. It’s so beautiful, and wilder than down south. There are less trees too.

From Monday to Friday we birded mainly around Unst (the most northerly island in Britain) with Brydon from Shetland Nature. It’s always a good experience to bird with experts and this was no different.  We saw a lot  – mostly common migrants for Shetland, but also some more unusual species such as a Great Grey Shrike, Bluethroat and Wryneck, oh and Blue Tits. We got to learn a lot of fieldcraft and improve our birding skills as well as seeing a lot. While we were birding with Brydon, we found Yellowhammers, Blue Tits, Great Tits and an Olive-backed Pipit. Finding birds is much better than twitching birds! 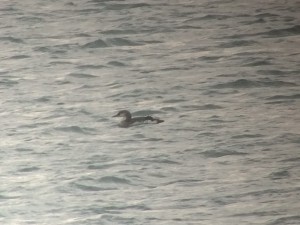 Of all the birds we found as a group, the Olive-backed Pipit was the best and the most challenging. We’d been checking a crop field when we flushed the bird and it went and sat on a distant fence post, making the initial ID harder. We suspected it would be an Olive-backed Pipit, but the lighting and distance of the bird made it seem poorly marked which would’ve been odd for an OBP but the olive-green plumage we noticed meant it wasn’t quite right for a Tree Pipit either… As it was starting to get dark, we left it and decided to try again the next day. Brydon managed to refind it while David and I were with the Autumn Birding group watching a Bluethroat and Great Grey Shrike. He got much better views and was able to confirm the bird was indeed an Olive-backed Pipit. We were extremely pleased when we found out, and even found another one on Friday too! 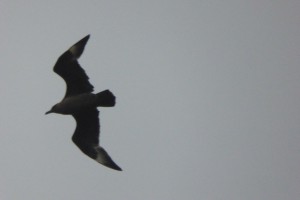 We also got to visit Hermaness, the most northerly point in Britain which was great. Some Gannets were still breeding, and the Great Skuas were spectactular, especially when they flew really close to us!

Friday was probably one of my favourite days. It started with 2 Glaucous Gulls from the living room window, and then we were off to Fetlar. There we found a Barred Warbler, Black-throated Diver and a Red-throated Diver and just to make the day even better, had amazing views of Otters! After this, we then had another Olive-backed Pipit and a Siberian Stonechat. What a day! 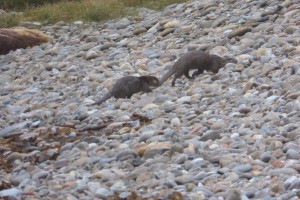 Saturday was our final day so we slowly made our way back towards Lerwick, birding as we went. This gave us a chance to explore Yell for a bit which was nice, and we got close up views of Scaup – one of many species I’d never seen before, and also Twite. We then finished the day and trip on an Eastern Bonelli’s Warbler. What a way to finish!

This trip was a great experience for me, especially as I’d rarely travelled up north, so was able to see species that are much less common in Hampshire which was wonderful. Birding with an expert also helped a great deal as I feel I’ve learnt a lot, particularly about fieldcraft which will come in handy for the future! In short, I’m very grateful to have been given the opportunity to go to Shetland and loved every minute of it.