As I stood in the middle of Poole Harbour at dusk, the ‘churring’ began. It was the second time in as many nights I had heard this magical, almost alien sound reverberating across the otherwise tranquil heathland. Perhaps I should explain that this habitat had not simply erupted from the sea bed; I was listening to these wonderful nightjars of Brownsea Island.

As part of my traineeship with the Dorset Wildlife Trust, last year I spent a week with 15 of my counterparts from the rest of Dorset as well as Devon, Somerset and Wiltshire on Brownsea Island, the largest island of Poole Harbour, Britain’s favourite nature reserve and a southern bastion for the native red squirrel. During this week we were trained as first aiders and learnt about health and safety in the workplace, but were also afforded the opportunity of exploring the excellent wildlife the island plays refuge to. We ventured into the hides to look out across the lagoon, home to internationally important populations of common and sandwich terns, got out some moth traps and had a guided tour of the island from Chris, the reserve manager on Brownsea. 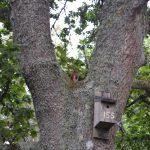 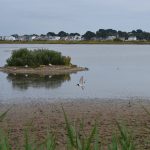 It was on this tour that, as a group, we heard that incredible sound, a churring male nightjar, and even witnessed these fantastic birds swooping across the heath, ‘wing clapping’ as they went. It was, quite simply, an incredible evening, made even more exciting by the discovery of glow worms shining in the darkness as we headed back to base. But it was that second evening that felt really special.

All the trainees had just been to the beach for a little paddle (or big dip for the bravest among us!) and as we made our way back the villa, I decided to walk back the other way, to see if I could cram in some more wildlife sightings. With a half an hour limit, I set off for the heath, dawdling to take some pictures along the way and to let the sun dip behind the tree line. I bumped into a rather bashful sika deer as I reached the heath, and as it bounded into the woods behind me, I gazed out as the sunset bathed the heather in a soft golden glow. After 10 minutes I’d barely heard a peep, and conscious of time, I started on my return journey. I resolved to cut through the woodland clearing to catch up on time. The first signs of the wildlife brilliance to come appeared as bats began weaving through the air, centimetres from the top of my head. Turning into the path, up ahead stood two sika deer, this time less startled by my sudden appearance on their turf. Was I downwind of them? I must have been, for they cautiously let me trail them for over 5 minutes. At one point I was within thirty metres of the pair, keeping low and attempting not to frighten them off. But a switch must have been flicked in their minds, and they darted away, back into the inky shadows beneath the trees. 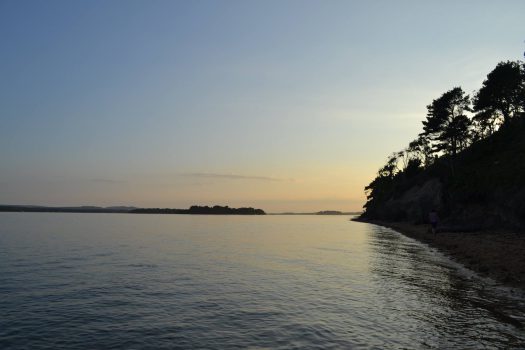 It was then that I heard the nightjar. It churred from the east for a little while and then flew across the clearing in plain sight. I got a spectacular view of the rather exotic creature despite the failing light, and was then treated to a further 5 minutes of intense calls! The noise produced by these birds is truly unique among British avifauna; it almost evokes the whir of an old film projector, although there are no words to properly describe this bizarre song. In an almost wildlife-induced daze I finally started moving again and made my way back, serenaded by the hoots of tawny owls and the odd distant churr! I even bumped into the deer again. All in all, it was a tremendous evening!

Experiencing nature one-on-one, and particularly as the sun is setting, is extraordinary and to do so in a place like Brownsea is fantastic. The memories from the whole trip and this night specifically will stay with me for a long time, and are already spurring me on to go out listening for nightjars again. If you get the chance to go on a nightjar walk, it’s definitely a ‘must do’ in my books!

Jack Bedford is a Volunteer and Engagement Trainee with Dorset Wildlife Trust who loves getting stuck in with conservation, whether it be talking to people about wildlife gardening or rolling up his sleeves to cut down to some rhodie.