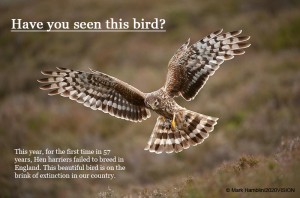 In my last article, I wrote of the plight facing hen harriers in England, which failed to breed in 2013 for the first time in 57 years. This decline has been attributed by many conservationists to illegal persecution by red grouse shooting estates. In my original article I only scratched the surface, and as I have delved deeper into this murky issue it seems that it is much more complicated than I originally made it out to be. I therefore feel it merits a second article, allowing me to explore this issue in greater depth.

I made the original assertion that red grouse are not the main prey of hen harriers, and that their impact upon red grouse densities would be negligible. This is not true, as Peter Hudson clearly demonstrates in his book, Grouse in Space and Time. In one study, 32% of the prey brought to a hen harrier nest was red grouse. 7.4% of red grouse were removed by hen harriers and this was found to affect their reproduction, with 17% fewer grouse chicks being born due to the presence of hen harriers. The studies referenced in this book felt that there could be a 45% reduction in the potential bag (amount of grouse killed by shooters) due to disturbance by hen harriers during the shooting season. These figures are supported by other texts on hen harriers, such as Thirgood & Redpath (2008) and Watson & Moss (2008). The issue must therefore be taken seriously, as there is clearly a genuine conflict.

The issue is a complex one, as many ecological issues are. The predator-prey dynamics that exist between hen harriers and red grouse are far from simple. The figures quoted above in Hudson’s book might appear conclusive, however whilst overall 17% fewer grouse chicks were born, only 3 of the 14 sites studied showed a significant difference in numbers. Similarly, another study that compared two shooting moors, one with hen harriers present and one without, found that there was very little difference in the number of red grouse shot (only 55 more red grouse were shot on the estate without hen harriers). The issue is further complicated by the fact that, as Watson & Moss in their New Naturalist Grouse book claim, many estate managers do not know how many grouse they have on their estate. This makes it almost impossible for them to know how many to shoot and how many are being lost due to predation.

Predation is not the only governing factor of red grouse numbers. When red grouse populations become artificially high problems can arise. Disease, another big natural killer of red grouse, spreads more rapidly at high densities and results in a boom-bust population cycle. Many species populations fluctuate naturally in this manner as a result of environmental pressures, often always recovering. Food availability and habitat quality also strongly influence red grouse breeding success. Poor habitat management can lead to a lack of food and adequate cover to rear chicks and hide from predators. Shooting estates also kill large amounts of mountain hares (another species facing localised extinction as a result of persecution), which removes another source of prey for the hen harrier, which could result in them turning to red grouse instead.

Even if we acknowledge and accept that hen harriers are having a large detrimental impact on red grouse numbers (which as demonstrated above, is debatable), there are ways for shooting estates to mitigate their impact without needing to resort to persecution. The Langholm Moor Demonstration Project, which began in 2007 on an estate in Scotland, is a ten-year project that aims to reconcile grouse moor and raptor interests with the core objective of re-establishing Langholm Moor as a driven grouse moor while maintaining a viable population of hen harriers. It uses a method known as ‘diversionary feeding’, which gives the breeding hen harriers there a different food source so that they do not kill the red grouse. Initial results show that in areas using this technique hen harriers killed 28.8% less red grouse chicks. Results since have improved even more, with many hen harriers not bringing a single red grouse chick to their nest.

Other solutions can be used too: using medicated grit feed to prevent disease, allowing golden eagles to recolonise areas (another bird of prey species that suffers from persecution) which can deter hen harriers, kill less mountain hares to provide more alternate food for hen harriers, extend the shooting season to allow more red grouse to be shot (and so reducing monetary losses), change beating techniques to adapt to spatial groupings of red grouse due to hen harrier presence and finally, ensure the habitat is managed as best as possible for the red grouse.

There is clearly a large array of non-lethal techniques available to shooting estates to reduce the number of red grouse lost to hen harrier predation. Sadly though, it seems many estates do not wish to use these methods, as hen harrier persecution has risen steadily since the 1980s. Six hen harriers were poisoned between 1981-1992, 10 between 1993-2000, 33 between 2004-2005 and a staggering 42 in 2006, the highest recorded for 25 years. In 2013, not a single Hen harrier pair bred in England, the first time this has happened for 57 years. Hen harriers aren’t the only species to be targeted, a week ago a goshawk was found dead in Derbyshire (its legs had been broken by an illegal trap) and most shocking of all; 12 red kites and 4 buzzards were found poisoned a couple of months ago in Scotland.

The future looks bleak for the hen harrier, with persecution showing no signs of stopping and the bird on the brink of extinction in England. Hen harriers and red grouse share the same habitat needs, a fact that cannot be changed. Hen harriers have nowhere else to go in England. There is plenty of habitat for them to thrive but they are being pushed out by the large shooting estate owners. The only way a solution can be found is if shooting estates accept hen harriers on their land and work constructively with conservationists to solve the issue. There is a wide suite of measures available that would allow hen harriers, red grouse and shooters to co-exist together, sharing the habitat for all that need to make a living from it. It is morally wrong (not to mention illegal) and selfish to immediately pursue destructive measures to remove predators from a system, when alternative measures exists that do not rely on persecution. They are depriving us of the chance of seeing one of our most beautiful birds of prey and our uplands are the poorer for it.