James Shooter is a young wildlife photographer (and a bloody good one at that). He was awarded, through A Focus On Nature, a place on a NorthShots photography course, generously donated by Peter Cairns, and since then has been working in a range of habitats across the UK. If you’re interested in talking to James about his work or in purchasing photographs, please visit his website.

Having decided at 11 o’clock the previous evening that the weather was looking promising the next morning, I begrudgingly set my alarm for 4.30 am. Naturally, I slept through that ridiculous time and randomly woke up at 5.30am in a bit of a panic! In a blur of clothes, camera gear and shoes on the wrong feet I was out the door and en route to the moors of the Peak District.

It’s August, 2013 and I was hopeful for some good sunlight. As the sun rose from its slumber even later than I had, it lit up the whole valley tinting the fog with gold, it really was quite magical! 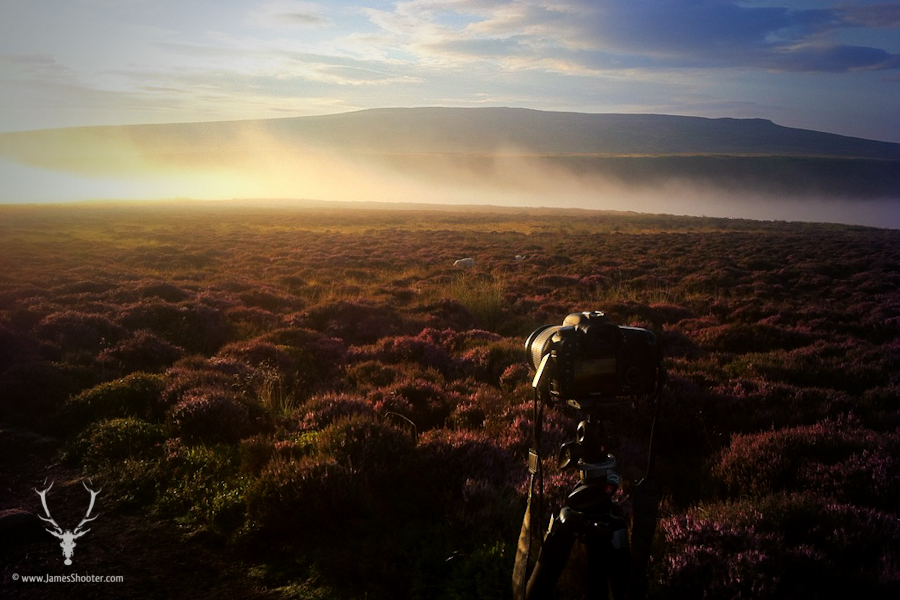 The main subject I was after for the morning was the Red Grouse Lagopus lagopus scotica, a subspecies of the continental Willow Grouse Lagopus lagopus and thus, only found on the British Isles.  This bird is an icon of British moorland and vast expanses of seemingly inhospitable land are managed solely for this species through great effort and financial cost.  This may sound like a positive step for conservation, but ulterior motives are at play and this species is certainly responsible for a lot of controversy between different interest parties, through no fault of its own of course. 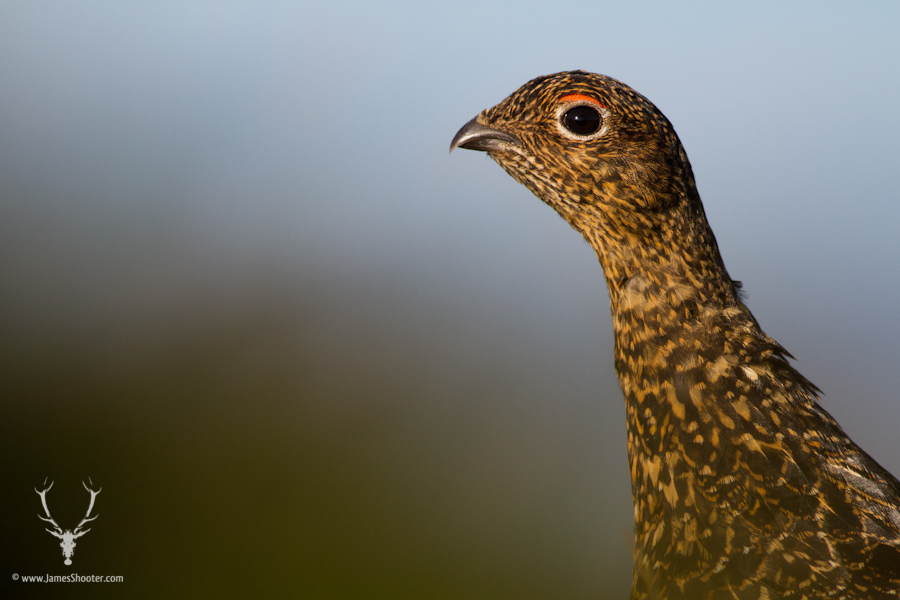 A female red grouse, distinguishable by the less prominent eye wattle and browner rather than red plumage.
© James Shooter 2013

Red Grouse are well known for being one of the most popular game birds in the UK.  The upkeep of their habitat is therefore of great importance to shooting estates across the British Isles.  An abundance of good quality moorland means an abundance of good quality grouse ready for the shooting season, which started August 12th and runs through until December 10th.  The start of the shooting season coincides with the blooming heather where the usual brown swathes of moor are replaced by a carpet of purple.  And so began my grouse shooting season, only lacking the guns! 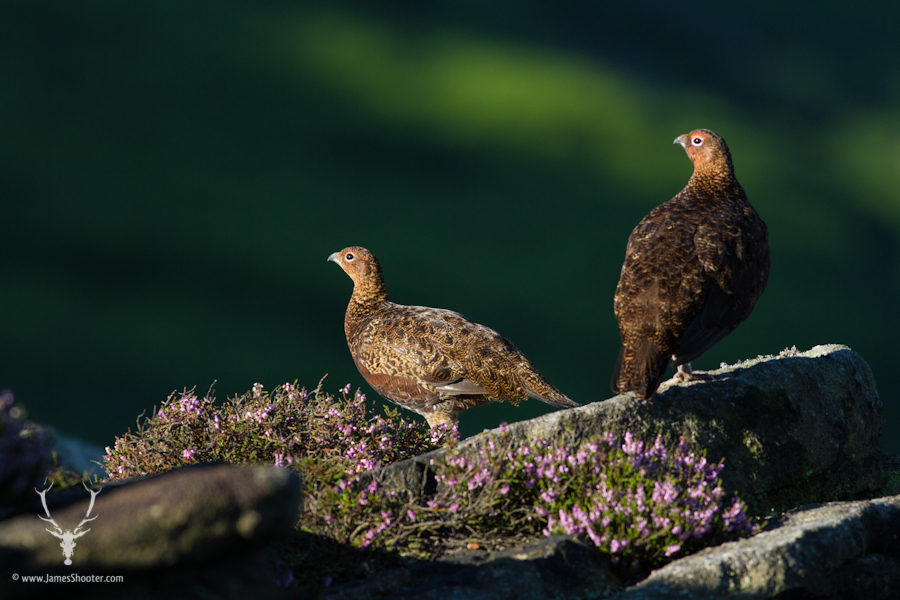 Shooting estates maintain the optimum quality of moorland specifically for red grouse.  Cutting and burning are well known practises that remove the larger woody parts of the plants and keeps them young.  Young plants are constantly in growth and therefore contain the most nutritional value for the grouse to feed on.  Burning is done on a rotational cycle creating a mosaic of different aged plants, the older patches give cover for the grouse and the younger plants provide food.  Grazing the area with sheep or cattle also has a similar effect, keeping the heather from growing too old or changing structure too much. 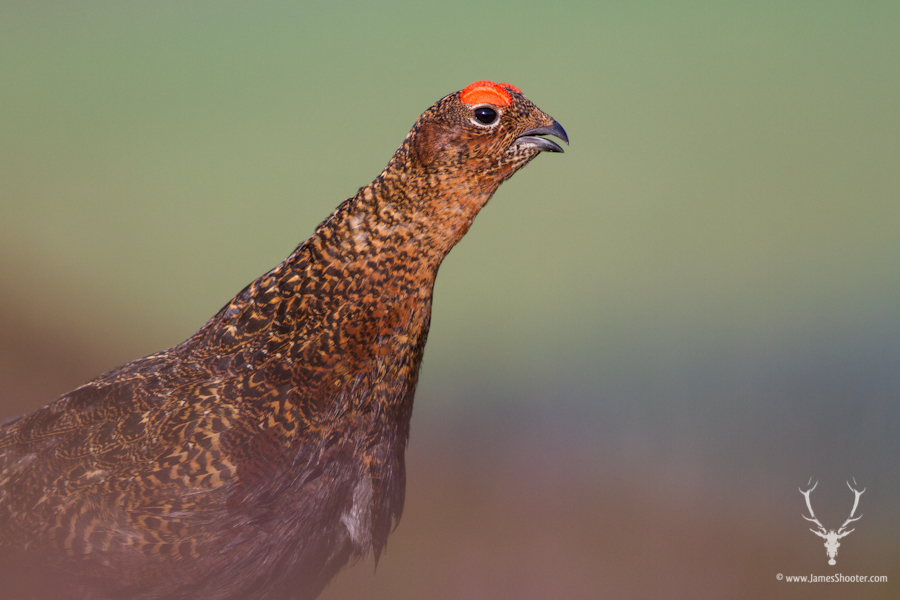 A calling male red grouse in amongst heather.
© James Shooter 2013

Gamekeepers who manage moorland for red grouse will argue that not only does this provide suitable habitat for their target species, but an array of moorland specialists such as Ring Ouzel and Stonechat.  This is true, but at what cost?  Gamekeepers are in direct conflict with birds of prey that may utilise the abundance of red grouse for prey, literally eating into their profits. 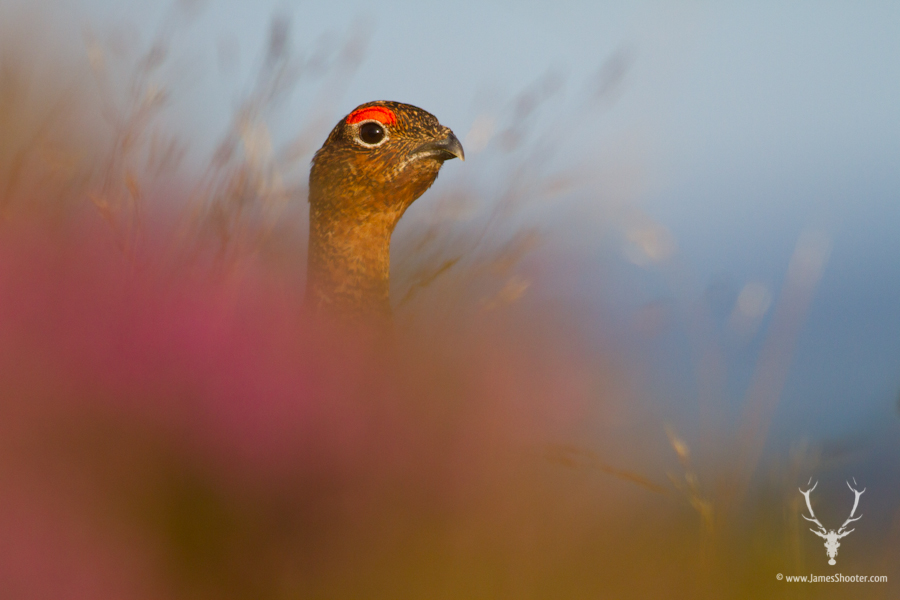 Perhaps my favourite image of the day, purple heather blurred in the foreground and the slightly out of focus grass strands made quite an arty, abstract pattern surrounding this grouse.
© James Shooter 2013

This has caused widespread cases of illegal killings of a number of different species across moorland.  Poisoned bait and also the use of traps are becoming an increasingly apparent tactic by some gamekeepers to control birds of prey abundance.  As a result of this long standing persecution, many species of raptor are struggling.  Hen Harrier for example are the most heavily persecuted and they are on the brink of extinction in England with ZERO nests being successful this year.  The RSPB reports that between 11 – 15% of the Scottish population is destroyed annually along with Golden Eagle, Peregrine Falcon and Common Buzzard being targeted to name but a few. 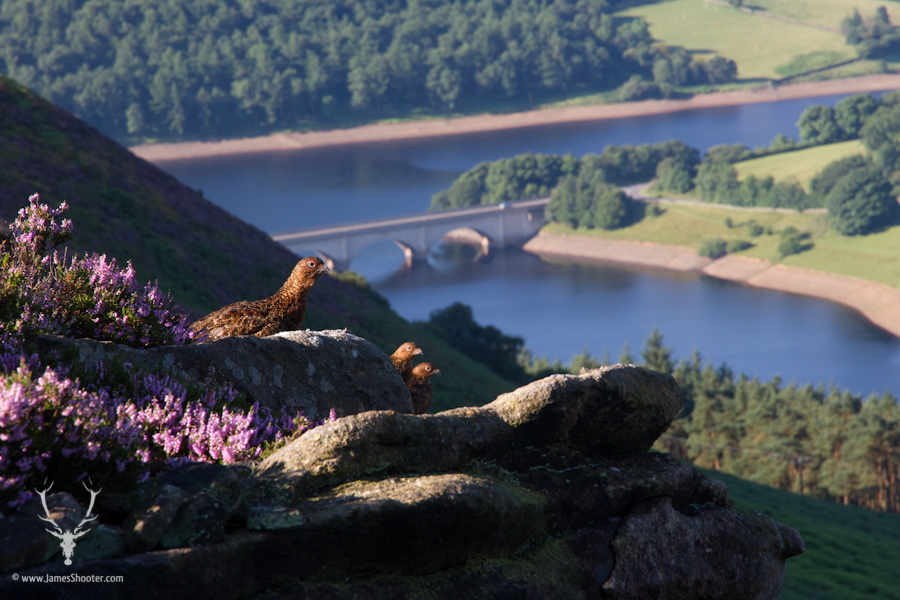 Wherever I get the opportunity I am trying to develop my portfolio of environmental images. These are harder to do as you need to get extremely close to the subject as a shorter focal length is required, but when it works, you get a different perspective to the portraits and it really puts the birds into context.
© James Shooter 2013

Research by a number of organisations has shown that although birds of prey will obviously take a small proportion of grouse, hen harrier abundance is associated more with vole and meadow pipit numbers, their preferred food choice.  The main causes for red grouse decline are much more likely to be down to a vast reduction in suitable habitat and as a result, available food.  Between the 1940s and 1980s 23% of heather coverage was lost in Scotland and 27% in England which is most likely down to a rapid increase in grazing sheep and deer numbers. 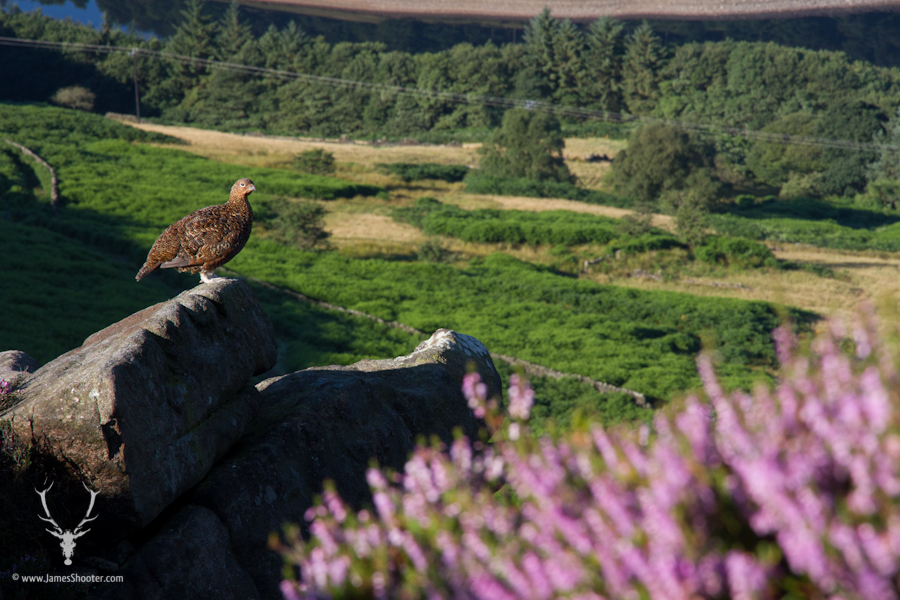 Another wide-angle image putting the grouse within it’s environment and telling a story of its behaviour and habitat.
© James Shooter 2013

Along with heather reduction over the years, much of the land has been drained which reduces the amount of plants and insects that rely on a boggy environment, removing the food source of red grouse chicks.

If gamekeepers want to increase red grouse numbers again there needs to be a serious change in attitude towards birds of prey and a more in-depth look at habitat improvement in the long term. Diversionary feeding can be used in the short term to reduce the number of red grouse chicks taken by Hen Harrier in the summer (by as much as 86%). This means that this UK endangered bird will get a helping hand with food, that the majority of red grouse chicks will be allowed to continue to adulthood and most importantly, we’re not taking backwards steps in nature conservation by illegally and deliberately reducing an at risk species by killing them. 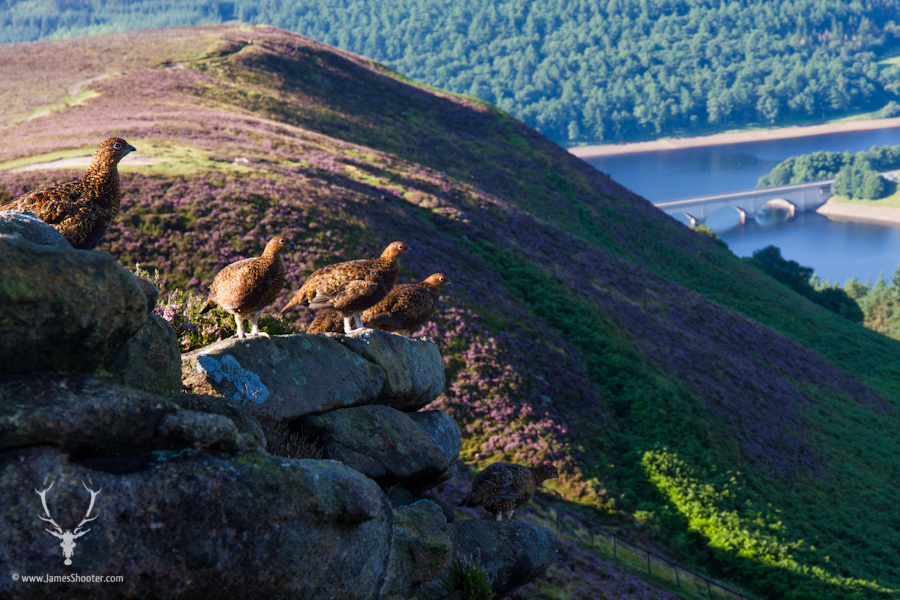 Lined up with a stunning backdrop….I’m not sure that they fully understood the shooting season had begun, I’d probably recommend a better hiding place over the coming months.
© James Shooter 2013