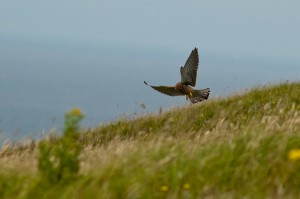 I do a lot of driving (for my sins!) and in recent months have done more than usual. A 400 mile round journey from Warwickshire to Dorset, 800 miles from Warwickshire to Snowdonia (with a detour to Somerset inbetween!) and an 1170 mile slog from Warwickshire to Scotland and back. Car journeys offer an excellent opportunity to keep an eye out for wildlife (even when you’re the driver!), and I saw much to brighten up the monotonous nature of our lonely motorways. However one species was conspicuous by its absence: the Kestrel. Over the course of these 2370 miles I saw just 5 of this beautiful little falcon (and these were all in the North of England).

When was the last time you saw a Kestrel? This is not a rhetorical question, I ask it with genuine interest as it is a question I have been asking myself more and more of late. If you’re like me (heaven forbid! :P) it might surprise you how long it takes to come up with the answer. I was pondering this question recently as I pulled up in my car at home, after the long and arduous aforementioned 400 mile round journey from Warwickshire to Dorset. I did not see a single Kestrel on this drive, not one. I remember when I was a teenager, gazing out of the car window on family holidays, seeing many Kestrel’s hovering over roadside verges. There was always a real sense of excitement at seeing this immaculate little bird of prey in action, displaying its perfect predatory poise and agility. Now my journeys are all but devoid of this experience, another species seemingly lost from the wider countryside.

Worryingly it seems as though this is not just my nostalgia or anecdotal observations, the facts support this idea. In a report published by the BTO in 2010 they found that the Kestrel population declined by 20% between 1995 and 2008, and by a further 36% between 2008 and 2009. It is listed on the Amber list by the RSPB and there is concern about the declines being experienced. My concern appears to be rooted in a genuine sense of loss, how has this come to be?

Comfortingly this decline has not gone unnoticed in the conservation sector, the RSPB are carrying out studies aimed at working out what is happening to our Kestrels. The usual suspects are listed as causes of the decline: habitat change, loss of prey (small mammals and birds), increased competition for nest sites, increased predation, increased use of rodenticides and lastly changes in our weather. The preliminary results of the RSPB’s work suggests that both changes in agricultural practices and increased use of rodenticides are associated with the decline. This would certainly seem to me to be a sensible conclusion, and it good to see that they are doing more analysis to understand the problems (and hopefully solutions) better. It comes as no surprise to learn that the continued ‘desertification’ of our wider countryside and over-use of poisons (which is also blamed for the decimation the Barn owl) is pushing another species to the brink. 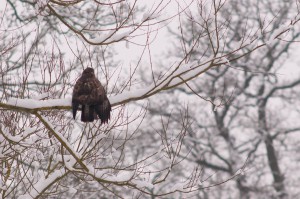 One of the factors in the list above cropped up in my mind as I pondered this problem on my long drives, that of increased competition and predation. One of the species mentioned by the RSPB, one I saw lots of on my drives, is the Buzzard. There is concern that the recovery of the Buzzard (from near extinction) and the decline of the Kestrel (towards extinction?) might not be merely a coincidence. Buzzards are much bigger than Kestrel’s and they share the same type of habitat, it is certainly possible that Buzzards might be out-competing Kestrels for food and habitat. Indeed, Buzzards have also been suggested as one of the reasons for the decline of the Adder. Predation pressure if something we should not ignore and we must consider it if we are to truly get to the root of what is happening to our wildlife.

It would be sad if there was no longer enough room in our countryside for the Kestrel and Buzzard to live side by side. Unfortunately this might be the case, perhaps our wider countryside has become so sterile that these birds are being squeezed to seek out the remaining rough grassland fragments that line our roads, and there is not enough to go around. This would be a depressing explanation of why now on my drives round the country, I see far more Buzzards than I do Kestrels.