Matt specialises in climate change policy, communications and youth engagement. He has worked and volunteered for the RSPB in a number of roles,  is a founding member and former Co-Director of the UK Youth Climate Coalition and recently co-authored a letter that was published in the Sunday Times, with 100 signatories including Sir David Attenborough, calling on the Government to maintain the role of the natural environment in the national curriculum. During 2013-14 Matt is working in Borneo, Indonesia, as Communications Manager for the Orangutan Tropical Peatand Project.

A few months ago, global negotiators gathered for the annual United Nations climate talks in Warsaw, Poland (a country which is ironically infamous for its pig-headed addiction to coal and its tendency to cock-block EU progress on climate change). The incident I’m referring to is Australian negotiators turning up to a meeting in pyjamas and shorts and t-shirts. This meeting was about ‘loss and damage’ – the concept of compensating (mostly developing) countries which are already suffering the consequences of climate change. Usually it’s the most vulnerable nations, those with the least resources to protect their citizens or their natural heritage, which are suffering most.

Negotiators from developing countries walked out in response to Australia blocking progress on loss and damage and also the general disrespect they showed during the course of the meeting. Australia’s complacency towards climate change is being matched by Canada and Japan’s as well. These attitudes worry me.

Anyway, I’m not going to go into detail about these annual negotiations (to learn more from a youth perspective read about the UK Youth Climate Coalition’s youth delegation to the talks and their take on things), suffice to say that progress towards a revolutionary new global deal on climate change, which many hope we’ll see in next year’s talks in Paris, looks unlikely. Little change there then: the talks are renowned for moving slower than a sloth after a heavy meal.

But this year’s talks come not long after the publication of the Intergovernmental Panel on Climate Change’s latest report on climate science. This is the first report since 2007, so is an important update. And the results: scientists are only more certain that climate change is caused by humans and that it’s going to be Very Bad News for both people and wildlife.

Let me say that again: fossil fuel companies plan to burn five times more carbon than we can afford to – this would leave safe limits for people and nature as a distant speck in our wake.

And very new research shows that 63% of all emissions since the Industrial Revolution are from just 90 companies – mainly the same fossil fuel ones. The scale of vested corporate interest we as an environmental movement face when it comes to climate change makes the Common Agricultural Policy look like a pub brawl over loose change.

I’m writing this piece in response to a blog by a fellow A Focus on Nature member, Simon Phelps. Besides his opening line – ‘I am not worried about climate change’ – he said little that I disagreed with (and he does go on to qualify this opening line later in the piece).

But after a heated Facebook exchange a few months ago, I feel it’s important to cool temperatures by clarifying, here in writing, my beliefs (by beliefs I don’t mean dogmatic ones based on assumptions, I mean ones based on nearly ten years of working on and studying these issues) about climate change and its links to nature conservation.

I am in complete agreement with Simon that it has come to dominate the media debate on the environment. Often at the expense of stories about the natural environment. You could be forgiven for thinking that nature is fine and that the entire conservation community has become obsessed with the Climate Change Problem.

To a certain extent this is true. Last year, I worked as part of the climate change team within the Royal Society for the Protection of Birds. This is a growing and important team within the organisation, and rightly so.

Climate change is clearly the gravest threat there is to wildlife, both in the UK and abroad. One third of land based species will be committed to extinction by 2050 due to climate change. 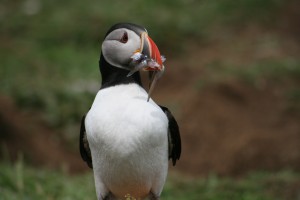 In the UK, its effects on seabirds demonstrate the ‘ability’ (a perverse word to use but forgive me as I couldn’t think of a better one) of climate change to rapidly and drastically alter the fortunes of species in one fell swoop – for example, half the changes in the breeding of seabirds and wintering waterbirds in the past 30 years can be explained by climate change. Climate change is revolutionising the conservation challenges we face faster than we can understand them.

Simon’s key concerns are habitat loss and invasive species, and that these are going unnoticed and unaddressed as climate change dominates the agenda. These are certainly grave threats. For me, habitat loss in particular is going largely unnoticed as vast swathes of our countryside become devoid of native wildlife, mostly due to subsidies which do little to encourage landowners to take action for wildlife. And it’s hard to get nature’s voice heard in debates about development: the zombie idea of an airport of the Thames Estuary has come back again, revived again and again over the decades despite the ecological value and designations of this special place.

These aren’t sexy stories for headlines compared to climate change and global apocalypse.

However, I don’t believe that climate change can be separated out so easily from habitat loss and invasive species, neither from an ecological point of view, nor from the perspective of our theory of change as conservationists. Habitat loss can cause and be caused by climate change. Invasive species will increase as climate change becomes worse. The UK Government’s 2008 Invasive Non-Native Species Framework Strategy recognised that the northward expansion of many invasive species over the past 30 years was consistent with changes that could be expected as a result of climate change. Ecologically, these problems are all, nowadays, inseparable. This makes it difficult to talk about switching resources or funding from one issue to the other – in a sense by tackling any of these issues you’re tackling all of them.

I have one small quibble with Simon’s piece. I believe the conservation movement needs to focus far more on long-term choices and stop fire fighting so much. While I completely agree we shouldn’t stop trying to save species on the brink of extinction overnight, we do need to think carefully about where our resources go.

To use an example, the turtle dove is on the brink of extinction in the UK for factors we don’t fully understand and are therefore largely beyond our control. Should we continue to invest in this, or should we switch these resources to more long-term work?

On the other hand, work to restore habitat saved the marsh harrier and the bittern from extinction in the UK. And I wouldn’t for a second want to change that. Conservation organisations must continue to save those species on the brink which we can do something about.

Today, this work continues, but due to sea level rise and coastal erosion has become inseparable from climate change. I was the warden for a reserve which is a reedbed creation project, designed to create compensation habitat for these birds when reserves right on the coast are inundated by saltwater. Today, climate change has entwined itself in the issues of habitat loss.

I think the conservation sector is beginning to show signs that it understands what long-term thinking means. Landscape scale approaches and investing in children’s connection to nature mark what I believe to be a shift in the sector’s approach. It involves making sure habitats are resilient to future climate change and that tomorrow’s citizens and decision makers care about nature. These projects are investments for the world 50 years down the line, not five years.

However, it’s important that these long-term approaches become the heart of how the conservation sector works. The reason that the 2010 change in Government signaled a gradual rollback of environmental rhetoric and protection was that concern for the natural environment is wide but shallow, not wide but deep.

Over the past few decades, the national narrative has switched from one of public good, public ownership and state intervention to one of individual freedom, free markets and private ownership. The latter set of values are anathema to the natural environment, resulting in externalities, overconsumption and overexploitation, and Governments which side with business and landowners, not the public and nature.

To overcome this conservation organisations need to work on long-term issues, from climate change, at the heart of which are issues of intergenerational justice, to advertising to children to reinvigorating the idea of common land (see a great piece by Ruth Davies of Greenpeace on this here).

(I’ll be writing more shortly on this blog about what the UK conservation movement can learn from the long-term messaging and values-based approach that was successfully adopted by the American political right several decades ago and is paying dividends today.)

Climate change has to be at the heart of this long-term approach, alongside a focus on habitats and invasive species, which, as I pointed out earlier, are kind of inseparable from this.

The other thing that Simon identifies is the media discussion. I agree that we need to be better at tying together climate change and conservation messages, and also at making sure the message about the loss of nature in the UK gets as much airtime.

The landmark State of Nature report was a great example of abundant media coverage for messages about conservation and nature’s decline. We need more of this please!

In fact, evidence shows that people’s concern for the environment and problems like nature comes from a deeper connection to nature. These deeper values can be inspired by learning about the nature on our doorsteps and the threats to it. The cause of climate change could benefit from more airtime for other conservation messages.

And it is the local stories, those of habitat loss and invasive species on people’s doorsteps, that may inspire them most. Rather than constantly trying to sell the big conservation picture, or the big climate change one (which can seem intimidating and daunting in its scale), let’s remember that sometimes the best approach can be to start small and local. Recruiting people’s support, concern or passion might be easier like this. I think this is the crucial point that Simon identifies.

However, as individual conservationists we might want to focus our time or efforts on habitat loss or invasive species. But we need to accept that we are living in a new normal; climate change has altered the rules of the game.

In 2050, when we’ve inherited the world being built today (I’ll be 64, how old will you be?) I want today’s climate models to be yesterday’s Michael Fish weather forecast (for those too young to remember, see this weather forecast the evening before one of the UK’s biggest ever storms). And I want biodiversity and habitat loss to have been reversed. I make no apologies for wanting both these things in equal measure. Call me greedy, but I think every young person in the UK today has the right to inherit a stable climate and a countryside, nay a world, rich in wildlife. Let’s make it happen.