Matt specialises in climate change policy, communications and youth engagement. He has worked and volunteered for the RSPB in a number of roles,  is a founding member and former Co-Director of the UK Youth Climate Coalition and recently co-authored a letter that was published in the Sunday Times, with 100 signatories including Sir David Attenborough, calling on the Government to maintain the role of the natural environment in the national curriculum. During 2013-14 Matt is working in Borneo, Indonesia, as Communications Manager for the Orangutan Tropical Peatand Project.

Lakoff has taken the US political theory scene and, with a recent speaking tour, the UK one too, by storm.

He has written extensively about the idea of frames. Frames are mental constructs which contain a certain number of ideas but exclude others. Think of a meal in a restaurant, for example. That’s a frame. You expect a waiter, wine, food, service, a bill. You don’t expect the head chef to come out and begin operating on your gall bladder; you know that’s not part of the frame.

Frames are so deeply embedded that appealing to them is very politically powerful and can motivate us to act, or vote, even against our best interests. In the US, the political right has known this for a long time and the political left is only just beginning to catch up.

Lakoff focuses in particular on the ‘deep frame’ of nurturant parent vs. strict father. He says that the American right has focused on strengthening the strict father model, which encompasses ideas of individual responsibility, strength and domination, but also protection from outside dangers, while discrediting the nurturant parent model and so undermining ideas of providing support and help to each other. This is why the American political right has been so successful in rolling back the welfare state and environmental safeguards.

Now we come to our second set of critical research. The Common Cause project on values is based on decades of research and hundreds of studies.

It shows some simple but extremely insightful and useful things.

Values are what underlie human behaviours and attitudes. There are around 100 or so human values found across cultures and societies. What’s more, we all have all of these values. Crucially though, we can only prioritise certain ones at certain times.

There are two other groups of values called Universalism and Benevolence. These two groups contain values such as justice, wisdom, concern for the natural environment, equality etc. 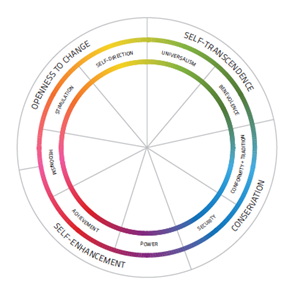 The spectrum of human values. Achievement and Power are directly opposite Universalism and Benevolence, and these two pairs are mutually exclusive.

Crucially, triggering one set of values suppresses the values that are opposite from it. A person is incapable of prioritising wealth on one hand and protecting the environment on the other simultaneously. In fact, prioritising wealth actively suppresses concern for the natural environment. This effect has been shown to last for the length of lab studies, but there are also more longitudinal studies which show that it can last over at least several months.

Values, therefore, are like muscles: the more they are flexed the stronger they become in influencing a person’s behaviours and attitudes.

Furthermore, adjacent values reinforce each other, a kind of symbiotic relationship. So, triggering someone’s concern for equality or wisdom will also reinforce the nearby value of concern for the environment, even though the environment hasn’t come up at all in the conversation or interaction.

This teaches us a crucial lesson: campaigns, projects and outcomes that aren’t necessarily to do with the natural environment can still benefit our cause just as much.

Overall, these two bodies of thought (Lakoff and Common Cause) tell us that more holistic and long-term thinking could make the work of the conservation sector easier by reducing the friction we face in wider society.

A long-term shift in values will be far more effective than a short-term shift in behaviours. It’s why biodiversity loss currently continues apace and why a change in government can signal a rollback of environmental safeguards and rhetoric. It’s why shifting funding away from fighting conservation fires and into messaging and campaign strategy might be a difficult and painful choice today but could deliver better conservation over the long-term.

Many decades ago, the US political right realised that investing in long-term values change, and understanding how communications worked in this way would yield long-term success. So, in the second half of the twentieth century, they invested millions of dollars in think-tanks to work on these issues.

Today, they have seen this investment pay off. In the national debate, conservative frames dominate. Lakoff picks out ‘tax relief’ as an example. This is used as part of everyday conversation by both the political right and left. But Lakoff argues that it’s a phrase created by the political right, to make you think of tax as a burden, and of any Government which lowers taxes as a heroic reliever. The political left has become trapped in the frames of the political right (is the same happening to conservationists as we’re forced to adopt market approaches like ecosystem services, biodiversity offsetting? These frames function to stimulate the deep frame of the human dominion over nature which can lead to its exploitation and over-consumption.).

By trying to fight the other person’s frame, you only reinforce it, like with elephants. Instead, Lakoff recommends that progressives avoid talking about ‘tax’ at all and instead frame it as investment in public services – fire stations, police, libraries, the internet. This is called reframing the debate and it’s in many ways similar to focusing on the pro-social and pro-environmental values, not pandering to the ones of our opponents.

Over the past few decades in the UK and US alike we’ve seen a progressive shift towards the values of individualism, free-markets, smaller Government, consumerism, status/image and inequality. It’s why frames like strivers vs. skivers stick so easily. Our values have shifted away from the social welfare model of the first half of the twentieth century towards the idea that it’s everyone for themselves.

This has consequences for the environment. Recap: values of individualism, wealth, status, and inequality suppress concern for the natural environment, social justice, unity with nature etc. We need to reverse this long-term shift in values.

We also need to adopt the kind of long-term thinking about societal values and messaging that the American right-wing adopted. Otherwise, I’m worried that in 40 years the conservation movement will still be excellent at fighting fires and saving a mammal over here but losing a reptile to extinction over there.

Some might argue that we’re already doing this thinking about values and messaging. But, it’s clear that we’re not doing enough: the Common Cause for Nature report (disclaimer: I was one of the researchers on this report) surveyed the literature of the conservation sector. It found that on average literature (magazines, leaflets etc.) produced by conservation charities rarely promote pro-environmental values such as protecting the environment and unity with nature, but often promote values linked to power and achievement through schemes such as ‘donate money while you shop’. In the long-run, this is harmful to the goals of the sector.

Instead, too often I fear, we’re busy trying to convince people that they should value nature because they’ll get a free gift or free entry, it provides us with economic services, will save them money, looks cool, or, in the case of grand prize draws, could win them money. You don’t need to go outside and connect with others over nature when you can Give as you Live (i.e. donate while you shop). This is why myself and others see the idea of celebrity endorsement as a flawed tactic, it triggers ideas of status and wealth.

These approaches undermine our own work in the long-term by reinforcing the values of status and consumption, the very values which are causing the problems we’re trying to tackle. We’re making our own work harder in the long-term, making the very hill we’re climbing steeper as we go. While we’re saying all these things we’re forgetting to convince the wider public about how amazing nature is.

But, there are two great examples of where the conservation sector has begun working with a more long-term, holistic, values-based approach. Working on children’s connection to nature can instill their lifelong passion for the natural environment at an early age. Second, working to provide green spaces in inner cities is a holistic approach that can help to connect people not only to nature but also address issues of social inequality, violence, aggression and crime.

This is the kind of approach we need if we want to work with Common Cause towards a world based on the values of social justice and concern for the natural environment. That’s certainly the world I want to inherit when I’m 64 in 2050.