If you want to be taken on a journey through the varied patchwork of the UK’s landscape then this book is for you. Starting the journey on the highly managed setting of the UK’s farmlands, Stephen Moss takes the reader all the way to the heady heights of rewilding – letting go of control altogether and seeing what nature does if it’s untouched. 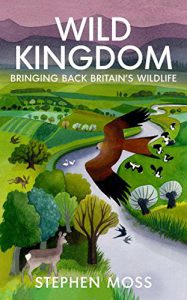 In between he visits the touchstones of our countryside and landscape, from forests to the sea to moorlands. Moss’ book isn’t just a eulogy for a changing, and diminishing, natural environment however, it is also a story of success. Along the way he meets people who are doing what they can to bring wildlife back to the UK’s different habitats – like the farmers setting aside land so stone curlews can return to breed.

“The case against the shooters of hen harriers is clear-cut: they are wilfully and deliberately breaking the law. Were they doing so in more populated areas of southern Britain, where they might be seen, they would be caught in the act more often than they are. But because they are doing their killing on vast private estates, inaccessible to both the public and the police, and because the landowners who employ them are rich and influential, they are getting away with it – time and time again.”

In taking on these topics he lays bare the political landscape of interests and forces that are shaping the natural world and the wildlife that lives in it. However, it is not all about the villains of the piece. There are heroes too who are reviving the land and the creatures around them. Moss has a delicate way of introducing the reader to these people, making them seem like friends.

What really made this book so readable for me though is the Stephen Moss trademark: delicate vignettes about the intimate characteristics, behaviours and interactions of wildlife. Unlike ‘What Britain does for Nature’ by Tony Juniper, which is a little more utilitarian in both its philosophy and its use of language (but equally as important as a piece of writing), Moss indulges in taking time to appreciate wildlife.

“For a moment I thought I was hallucinating, and had imagined the whole bizarre scene. But this was indeed my very first bittern. My duck, as it were, had been broken, and over the next twenty years or so I saw a few more, though never very well: usually as they posed momentarily by a dense stand of reeds, or flew a few feet over the reed bed before plunging back down again.”

This book weaves such observations amongst a Moss who, on this occasion, is much more engaged in conservation and the challenges facing it. Other works in the Moss oeuvre, such as A Sky Full of Starlings, or This Birding Life, are purer in their beautiful and highly readable journaling of episodes spent in nature.

And of course there is Moss’s own relationship to the wildlife too. His own wonder and amazement is something that oozes off the page and infects the reader too. And, knowing Stephen, as I do, I can confirm that his authorial personality is much like his real-life one. Many an hour can be passed in conversation about trips to see birds and other wildlife, exchanging stories.

For a finely composed insight into the wildlife and wonder of our country, coupled seamlessly with a thought-piece on 21st century conservation, you could do no better.

Matt Williams is a conservationist, nature writer and photographer. He was previously Co-Director of the UK Youth Climate Coalition, and is AFON’s Associate Director. Follow him on twitter @mattadamw and check out his website mattadamwilliams.co.uk.