Having never seen a hedgehog in the wild before I now feel I have thanks to these enchanting books by Hugh Warwick. They really capture the hedgehog’s cute characteristics as well as highlighting some of the problems they face. As well as this I found it particularly interesting to learn about the hedgehog’s history and why they have become such a key animal in Britain. 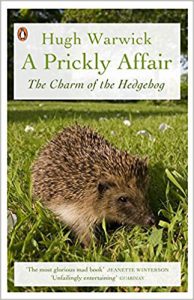 The hedgehog, an animal close to the hearts of many people in Britain, whether it be seeing them in the garden or studying them closely, A Prickly Affair by Hugh Warwick documents the joys and struggles of working alongside hedgehogs. Capturing how the hedgehog has become one of the most well-known mammals in the UK, as well as all over the world, this book is essential if you have a love of these prickly creatures. The book starts with telling us exactly what a hedgehog is (if you didn’t already know) and stating clearly that it is not in fact a relative of the Porcupine. It also tells us that there are 20 hedgehog species, which was a new fact for me! ‘What Do Hedgehogs Do?’ the following chapter, must be one of my favourites. This one talks about Hugh Warwick carrying out research to see if there was any point in people looking after hedgehogs, as many dedicated people take in sick hedgehogs, care for them and release them. This chapter was one of my favourites because it documented what it is like to carry out research work, which I found quite intriguing.

Part two goes on to describe hedgehogs taking part in the International Hedgehog Olympics. I found this chapter particularly funny as you don’t normally think of hedgehogs as athletes! It also talked about Hugh Warwick’s search for Hugh’s (Hemiechinus hughi) hedgehog which takes him to China. He also writes about, most importantly, how we can look after hedgehogs. For example, tackling the issues of bonfires and fences which are barriers to hedgehogs and netting that could injure them. The final chapter shows us why it’s so important we care for them and how hedgehogs can save the world!

A Prickly Affair must be one of the finest nature books I have read, with some of the chapters taking me on journeys to the countryside and even China due to them being described in such detail. Other chapters, such as the ‘Hedgehog Olympics’ captured the hedgehog’s charm and how humorous they can be. I thoroughly enjoyed reading this book and would highly recommend it for any hedgehog or wildlife lover out there! 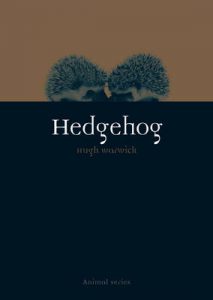 The next book I read was non-fiction, also written by Hugh Warwick, which was simply named Hedgehog. I loved this book, firstly because it tells us everything you would want to know about the hedgehog and where they have been featured. Also it is beautifully printed and the photos are colourful and eye-catching. If I had to say anything I didn’t like as much about the book it was that the language used was quite complex. However that was probably because I am only 14 and it is more than likely aimed at older readers. One of my favourite parts in the book is where it says about the road safety hedgehogs as it brought back memories of watching the video in Primary School. Once again, I greatly enjoyed Hedgehog and if you love hedgehogs or want to know more about these prickly animals, this is the perfect book for you.

Hedgehog is part of the ‘Animal’ book series which features over 60 books, written by different authors, which are dedicated to one specific animal. As the name suggests this one tells us all about the hedgehog, from the folklore that surrounds them to the ones that are featured in some adverts. I would say that my favourite chapter is in fact ‘Artistic Hedgehogs’ because it shows how they have made such an impact to the world, with them featuring in films, in music and even on stage!

It once again tells us exactly what a hedgehog is as well as telling us in detail about their spines. I was interested to know that they are made of keratin and that the slight curve at the base of them function as shock absorbers. It also tells us about helping hedgehogs, how they are cared for in wildlife hospitals and what we need to do conservation-wise. From reading this my opinion is that due to their characteristics they are one of our most loved animals. This is because you can get close to them without disturbing them and really appreciate what a fascinating animal they are and that is why it’s so important we look after them for future generations.

Mya Bambrick is a young birder, wildlife photographer and artist. She has been highly commended in West Sussex’s nature photographer of the year, and shortlisted in the BWPA. When she is older she would like a career in wildlife conservation or to be a professional photographer. Follow her via Twitter: @MyaBambrick1 and check out her blog http://myathebirder.blogspot.co.uk/.