When it first appeared on our natural history bookshelves back in 2003, this fantastic book transformed moth recording and the identification of Britain’s moths. No longer was it necessary to trawl through museum photographs in hefty guides depicting pinned specimens in faded and contorted positions. Identification suddenly became so much easier and accessible to the general public, and no doubt facilitated the rapid take-off of moth recording as a widespread past-time amongst the general public. 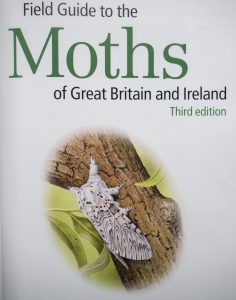 Spring is the most exciting time of year for many reasons, but I eagerly await being able to dust off the moth trap and discover the first smattering of moths on mild March nights. The proliferation of emerging plantlife and increasing temperatures over the coming months spark the emergence of a plethora of stunning Lepidopteran species. To get to grips with the diversity of species we are endowed with here in the UK, the Field Guide to the Moths of Great Britain and Ireland has remained the cornerstone of reference text and identification since its original publishing. 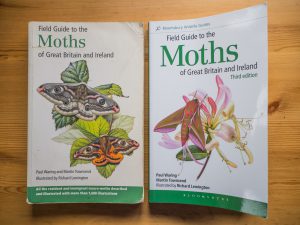 The new and the old: my well-thumbed copy of the first edition, with the snazzy new 2017 release beside.

In this essential field guide, Paul Waring and Martin Townsend provide readers with detailed information on 896 ‘macro moth’ species, along with colour plates populated with the exquisite illustrations of renowned wildlife artist Richard Lewington. Over 1600 paintings embellish the pages, occasionally consisting of line drawings and useful ID tips for separating some of the more obscure species, whilst photographs of larval and pupal stages are also included for a selection of species. 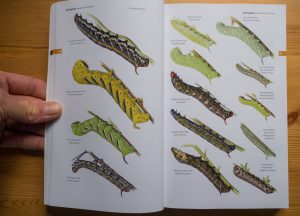 The book sets out with a general introduction to the field of moth recording, walking readers through the biology and anatomy of moths, the various field sampling techniques, how data is collected and assimilated into national schemes, and some of the groups and organisations on the forefront of moth recording in the UK. The updated introduction explains some of the ways in which the methods of identifying and recording moths have changed in recent years with the advent of various technologies. Crucially, this latest edition also includes a brief section on the conservation of moths – a subject in dire need of attention as changing land use and climate are having such alarming impacts on our nation’s moths. [see Butterfly Conservation’s The State Of The Britain’s Larger Moths Report 2013 ]. 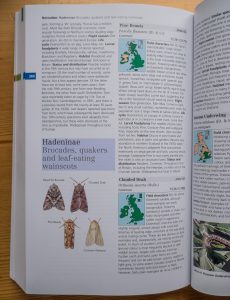 The highly concise and informative text, complete with clear and updated distribution maps.

The main text of the book comprises brief introductions to each moth family, followed by concise and detailed species treatments. For each species, the field characters and behaviour is outlined, along with similar confusion species, flight season, lifecycle, larval foodplants, habitat & distribution, and status. The 805 up-to-date distribution maps give a handy and clear outline of ranges for resident species, although should only be used to give an overall impression as opposed to being relied upon for precise details.

Richard Lewington’s beautiful and accurate paintings populate the 72 colour plates, depicting the natural resting position of species in addition to underwing patterning where appropriate. A selection of different morphs are included for some of the more variable species, such as the July Highflyer, whilst various geographic variants and contrasting first and second generation forms of some species are also illustrated. Sexual dimorphism is included for species where appropriate, such as the bizarrely wingless females of some Ennominae species such as Winter Moth.

The exquisite colour plates are as much a piece of art as they are an identification resource! Identifying even the more tedious species groups such as the Pugs is made enjoyable with this resource to hand. Gone are the days of examining tatty pinned specimens in dusty collection draws (in Britain, at any rate).

There are a number of great improvements to draw attention to in the third edition of this fantastic guide, which was published earlier this year…

Whether you’re new to moth recording or a seasoned ‘moth-er’, this is THE moth book to own. I’ve been the proud owner of the first edition since delving into the world of moth trapping at the age of 11, and it’s provided an endless source of information to facilitate my development in this area of entomology. Suffice to say that identifying a moth in the UK couldn’t be made any easier with such a stupendous resource to hand, and this book I’m sure will remain the moth enthusiast’s bible for many years to come, both for beginners and experienced observers alike. I can thoroughly recommend adding this superb resource to your stack of ID guides, especially with the recent updates contained in the 2017 edition. I hope you derive as much delight and interest from the guide as I have done.

Ben Porter is a young naturalist and aspiring wildlife photographer from the small windswept isle of Bardsey, North Wales. He is currently studying Conservation Biology with the University of Exeter and hopes to work in the field of conservation as an ecologist or researcher. Growing up on a remote island, Ben spent his spare time training as a bird ringer, moth trapping, photographing the isle’s wildlife and volunteering for Bardsey Bird Observatory. You can follow him on Twitter: @bardseyben and on his blog: https://benporterwildlife.wordpress.com/.