I’m a proud Essex boy, although if you spoke to me without knowing anything about me beforehand, you might not be able to guess this. Similarly, if you rely on the stereotypical imagery espoused in popular culture, you might not believe me when I say that Essex is a bright jewel when it comes to wildlife spectacles. Its coast, the longest of any county in England, is a particularly special place and this time of year it is awash with the sights and sounds of birds that have migrated from the north and east. However, increasingly-densely populated and facing pressure from housing development, pollution, transport links and industrial activity and with London on its doorstep, Essex has grown less and less wild over the years.

J.A Baker, author of one of the most important works of nature writing ever – The Peregrine – lived and worked in the county for much of his life and chronicled the wildlife of the area at a time when parts of Essex were still remote enough to be able to properly escape everyday life, to enter the realm of the wild. His book has become something of a talisman for me, and now when I visit the parts of the county where he walked and watched the natural world, I carry it with me and delve into his accounts of place, looking for changes in the landscape or in the state of nature around me. Often the changes are not for the better, seen through the prism of someone who yearns for wildness on their doorstep.

Nonetheless, there are many pockets of the wild remaining across the county, and as part of this AFON Advent series I thought I’d return to some memories of visits to some of my favourite reserves, celebrating the local conservation efforts that people across my part of the world are engaged in. 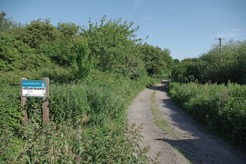 I have to start with the reserve just down the road from where I grew up, the place where I first went ‘pond dipping’ and looked for frogspawn: Great Holland Pits.

The site of a former gravel pit which was closed in the 1960s, this 40 acre reserve is owned and managed by Essex Wildlife Trust. In a landscape that is largely agricultural, the Pits is refreshingly diverse, with remnants of woodland, grassland, scrub, ponds and pools. I have particularly fond memories of visiting the reserve in winter under a blanket of deep snow, and with further flurries falling from the sky. In summer, it’s a glorious place to see butterflies and bees and it attracts numerous species of small birds. The meadows are awash with flowering plants including yellow archangel and mousetail. 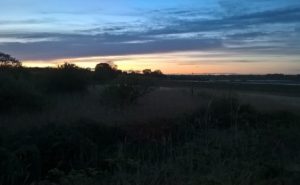 In many ways a larger version of Great Holland Pits, albeit with a coastal border and larger at almost 50ha (125 acres), Fingringhoe is a national stronghold for nightingales and has been managed with them in mind for years. Another former gravel pit, it was actually Essex Wildlife Trust’s first nature reserve (1961) and was also the site for their first visitor centre. The view out to the Colne estuary never ceases to stop me in my tracks, drawing my gaze across the water and marshes. Thousands of waders and wildfowl flock to the reserve each winter, making the most of this east coast sanctuary. However, it’s the nightingales that do it for me. Listening to their distinctive calls was one of my clearest memories from this year. I certainly recommend a visit if you are in Essex in the spring, or indeed at any other time of year. 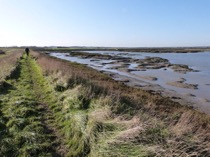 Although there are many more I could select, my final reserve to profile is Old Hall Marshes, managed by the RSPB. I first visited this reserve because of Baker and The Peregrine. It is situated in the eastern coastal reaches of his stomping ground and visiting this place is like jumping into Baker’s book itself. A low lying coastal grassland (improved and unimproved) managed in conjunction with local graziers, Old Hall Marshes is surrounded by a sea wall with acres of salt marsh on the outside. At this time of year flocks of dark bellied brent geese graze inside the sea wall and anyone looking across the outward edge of the sea wall, across the saltings, will see a range of birdlife, from great white egret to black tailed godwit. Although it doesn’t feel as remote as it must have done in Baker’s day, with the sound of road noise clear on the air and development visible all around, not least the mighty Bradwell Power Station to the south, Old Hall Marshes remain a conservation gem.

I want to thank the army of volunteers and staff at conservation organisations and charities such as Essex Wildlife Trust and the RSPB who are acting #NowforNature to protect these places for people and wildlife. There is much still to be done and the pressures seem to always increase, but I am optimistic for the future of the wild in my county. In some places it lives on.

Ben is an Essex boy through and through, having been born and grown up in the county and now he lives and works there again, following years living in Norfolk, the Cotswolds and the west country. His work has been published in The Guardian, The Countryman and Earth Island Journal, among others and he blogs at thinkingcountry.com. He is a member of the AFON committee, runs the Meet the Farmers podcast and manages the conservation projects on his family farm in Essex.