I stood, gazing at the purple flowers with a frown on my face. I knew it was a bee, but its markings did not match up with any of the bumblebees that quickly flitted through my brain. It had yellow and black stripes similar to a buff-tailed bumblebee, however, its abdomen was what confused me. It was brilliantly white, silvery almost. I spent a long time looking at six of these specimens, either climbing slowly – moving one leg gently at a time from petal to petal, or buzzing, with the occasional kestrel-like hover, before settling on another bloom. As it’s the 21st Century, I took many photos and videos to help me in identification – most of them almost impressively blurry. Then I jumped up and ran into the house for an insect guide – for I had witnessed a new species in the reserve I spend the most time in: my back garden.

Given that my family garden is situated in the Suffolk countryside you might think having wildlife in it was natural. However, we overlook arable farmland, which can be desert-like for wildlife depending on what’s grown. Field margins and hedges provide crucial homes for nature, alongside the other habitat edging the fields – gardens. Yet we wanted to ensure our garden was a year-round haven, providing pollen and nectar in spring and summer and a harbour in autumn and winter. 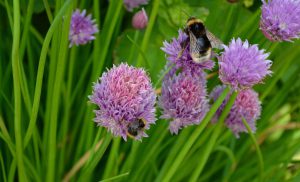 Looking out the window now, in December, it looks a little raggedy! Catmint, once covered in green and velvety leaves, with labiate (two-lobed) flowers just waiting to open for an insect, is now all grey stems, withered and shrunken. Sedum has turned dull red, still holding its flower to the sky, now empty and hollow. The pleached crab apple trees lean over them in a comforting manner, their branches bare and open to the wind.

However, as we all know, winter is far from lifeless. If you sit on our sofa of a morning with a cup of tea, and peer out the window, you see a miniature flit of brown. A wren, hops in and out of a borrower-like world, from the forests of the catmint to the trees of forget-me-not leaves, picking a feast of insects much smaller than itself from the leaves. Overhead a battle royal ensues. Blackbird versus very stubborn crab apple. Only a few left now on the branches – holly and pyracanthus have already been stripped bare – and those left are not completely ripe. Yet, after a few flaps, yanks and tugs, the blackbird wins the day, and flies off trilling its success into the wintery morn. 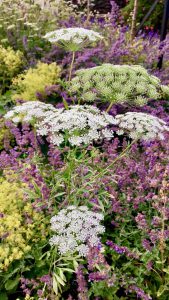 The spring and summer breath opulence. Colour and leaves abound, lavender spills into catmint, which props up the sheep’s parsley – grown too tall for its gaunt stems it reclines against the lower shrubs, while its umbellifer flowers host a myriad of insects for lunch. Buzzing becomes akin to silence, it is so steady and ever-present. Red-tailed, buff-tailed and white-tailed bumblebees smother the flowers. My aforementioned bee excitingly turned out to be a vestal cuckoo bumblebee; like the bird that gives it its name it is a parasite, a solitary bee that lays its eggs in the nest of the buff-tailed bumblebee. Dozens covered the lavender, jostling with hummingbird hawkmoths, while we shared our wooden patio furniture with wasps which scraped off the surface wood for their nests.

Yet, I do admit that our rural setting does allow for some pretty special encounters. Having old family friends over to tea last year included what felt like a twenty-minute silence, as a barn owl alighted just beyond our garden fence; none of us dared move unless we fright it. Kestrels have become an everyday sight; it is common to see one hovering, wings beating furiously, just over a hedge, then either a sudden dive follows, or a nonchalant relaxation of the wings as it beats away – it will get its prey next time. Hares frequent the arable furrows, basking in the winter sunlight, and just once, a merlin alighted on our garden fence, decided our garden was not for him, and was never seen again.

Some of my best wildlife sightings have been here, which before we moved in was nothing but a square of lawn, and flower beds covered in bin liners to keep the weeds down. All our gardens, no matter how big or small, can be a haven, our own reserve, #nowfornature. We still have more future plans: since discovering tell-tale droppings on the lawn, we will cut a little hole in the fence as a hedgehog gateway. Yet, as I count down the days till Christmas with the most brilliant case of ill-timed flu, from my sofa I can see robins singing to each other in these too-warm winter mornings, already thinking about pairing up for the season ahead, whilst overlooking the lovely nature reserve that is also our back garden.

Alexandra Hoadley is currently studying for BA English and Geography at the University of Exeter, Cornwall Campus. She is a presenter on NatureWatch, and is AFON’s Online and Social Media Manager. Follow her on Twitter @AKHoadley, and check out her blog https://alexandrahoadley.wordpress.com/.