I am currently studying Zoology at the University of Exeter and am passionate about wildlife, in particular birds, which is how I came across the hazel dormouse (Muscardinus avellanarius). Whilst gathering data on nesting birds on the Isle of Wight for the British Trust for Ornithology’s Nest Record Scheme, I realised that I could increase the number of records to study by asking friends and colleagues for any records they had of birds in dormouse nest boxes. 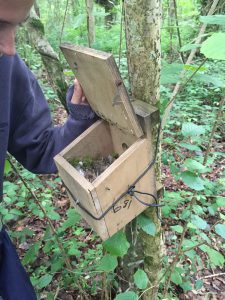 Dormice boxes, unlike bird boxes, have a hole at the back that faces the tree, but this doesn’t stop birds still using them.

This led me to thinking about how the different species interact. Consequently, I carried out my undergraduate research project on the competition and interactions that occur between the hazel dormouse and nesting birds, mainly various tit species, for the use of dormouse nest boxes. These boxes are designed for dormice to use during the summer for breeding. However, they are often used by breeding birds earlier in the year and I want to find out what impact, if any, this might have on the dormice.

Dormice are currently declining in both range and numbers, mainly due to inappropriate management of hedgerows and woodlands and are now classified as at risk of extinction within the United Kingdom. They are mainly nocturnal animals and spend the majority of their time in the trees with their diet varying through the year, from tree flowers in spring, to caterpillars and wasp galls in summer, and finally fattening up on blackberries and hazelnuts in autumn. The habitat that they are most commonly found in is successional woodland, often after it has been coppiced, but they can also be found in more mature woodlands or even scrub and hedgerows.

The National Dormouse Monitoring Scheme (NDMP) is run by the People’s Trust for Endangered Species (PTES) and you are only allowed to check boxes and handle/photograph dormice under licence from Natural England. These checks run from roughly April to October and are carried out once a month. When a dormouse is found it is weighed and its life stage is recorded; this can range from ‘pinks’ (when they have just been born) to adults that have to have hibernated over winter at least once before.

A young dormouse around 2 weeks old. This one would most likely be recorded as GEO (Grey Eyes Open) although of course there is always an element of subjectivity with any biological recording.

Young dormice can be weighed to get a measure of their health, although all young are weighed together to speed up the process, obtaining an average rather than individual weight, if still relatively young. The sex of the dormouse is also recorded as well as its breeding status. 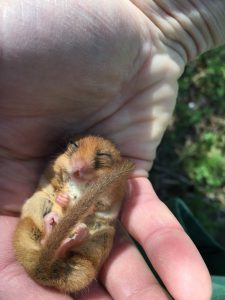 A dormouse found during the April check that has come out of hibernation early but fallen into a state of torpor on a cold morning. When handling a torpid dormouse it is important to be as quick and efficient as possible with all data collection so as not to warm it up and awaken it from its torpor, before it is returned to its box.

In the autumn or early spring, dormice can sometimes be found in a state of torpor on a cold morning. Torpor is a state of decreased physiological activity in an animal, which usually includes reduced body temperature and metabolic rate, but only lasts a matter of hours compared to the more extreme version hibernation, which can last months. However, dormice do in fact hibernate over the winter. They actually go below the ground to do this, where the temperature fluctuates less and doesn’t drop as low as staying in a box. Both torpor and hibernation are ultimately used to conserve energy during cold and wet conditions or when food availability is scarce.

If you have ever been lucky enough to see a dormouse, or even found one dead, come across a dormouse nest, or perhaps picked up a hazelnut that you think has been chewed by a dormouse, you can submit a one-off record to the National Dormouse Database to help improve their understanding of their distribution and abundance via this link:

Robbie is a Zoology student at the University of Exeter, living on the Isle of Wight where he has carried out his dormouse monitoring. Along with this he is an avid birder, ringer and photographer/filmmaker. Follow him on Instagram @robbieoutside and Twitter @robbieoutside, check out his Facebook page, https://www.facebook.com/robbiephillipsphotography/, and his website http://www.robbiephillipsphotography.co.uk/!