Gracefully gliding across the sea of rock rose, a little butterfly has found the perfect place to rest. On a steep south-facing slope, basking in the heat of the mid-day sun, life seems like it couldn’t be any better for this beautiful northern brown argus. I pause to watch this idyllic scene, noticing other winged marvels like grayling, red admirals and cinnabar moths joining the party. Dwarfed by these other fliers, the northern brown argus is unfazed, investigating the buttery petals of the rock rose. 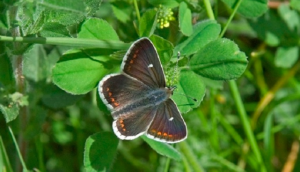 Yet, as a species, the future of the northern brown argus is not as bright. Between 1984 and 2003, a 91% population decline has placed this tiny butterfly in the not-so-esteemed company of threatened creatures such as the water vole, wildcat and corn crake. The loss of suitable habitat seems to be the main threat, alongside local extinctions in small isolated sites. Northern brown argus live in small colonies (often less than 50 individuals), typically not dispersing far. It is believed that the species went extinct in Holyrood Park in 1869, making a reappearance in 2005 all the more surprising and important! The species has been recorded in the Park every year since.

Such drastic national declines has made the conservation of the northern brown argus a priority. Here in Holyrood Park, a dedicated team of staff and volunteers with the Historic Environment Scotland Ranger Service spent the summer surveying and monitoring this threatened butterfly. Walking weekly transects known to have had sightings or populations, many people were rewarded with great views whilst also contributing to vital conservation work. 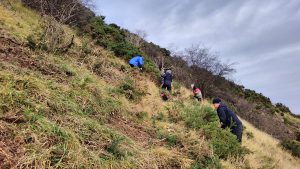 Of course the work does not stop there! Conserving the northern brown argus is a year-long effort. During the autumn and winter months, work is undertaken to ensure the butterfly will have a home for the upcoming year and hopefully many years to come. It is no coincidence that my sighting of the northern brown argus was on a yellow carpet of rock rose. In fact you are very unlikely to find such a butterfly far from this plant! Growing in dense clusters, rock rose is the larval foodplant of the butterfly and where adults lay their eggs – making this nectar-rich flower essential to the species’ survival.

With this in mind, during these colder months, our focus is to maintain and even improve the habitat conditions for the northern brown argus. This is done by preventing scrub encroachment onto areas of rock rose – gorse is the main target in Holyrood Park. Armed with loppers and bow saws, volunteers and staff cut back this spiny shrub, allowing the rock rose to flourish come spring and summer. Even local schools get involved – over a few days one class did a fantastic job clearing a gorse-infested quarry. This will hopefully allow rock rose to expand its range and perhaps even encourage a new colony of butterflies.

The efforts of so many give me hope that Holyrood Park will remain a safe haven for this endangered butterfly. Surrounded by the city of Edinburgh, the Park is perhaps better known as a visitor attraction than a refuge. The volcanic landscape attracts many. Fire and then ice carved the rugged terrain that now defines the capital. Yet amongst it all, on a steep slope, a small insect is clinging on.

Gordon Smith is an Assistant Ranger with Historic Environment Scotland, based at Holyrood Park. He has a BSc in Zoology from Aberdeen University. Whether at work or in his free time he enjoys exploring the great outdoors.

All photos by Historic Environment Scotland.