A love of the natural world came to me young, I was lucky to have parents and grandparents who had grown up roaming the fields, woods, hedgerows and sea. None were naturalists, conservationists, or academics, but all of them enjoyed and respected nature.

They put the roots down, and began the process of igniting the flame. Those roots set a path that, thankfully, I’m still following today. Without my family, it would have been highly unlikely that I would have found a connection with nature. Yet, it was a stranger who unknowingly sparked the tinder. One random act of kindness had let loose a passion that I will never look back on.

When I was 13 I began exploring further afield, drifting through the green belt, into and among the semi-ancient woodland of Holywell Dene. I soon found Holywell Pond, a little Northumberland Wildlife Trust Nature Reserve in South-East Northumberland. It has two hides, a breeze block built public hide and a wooden ‘members’ hide. I’d visited the member’s hide two times in the hope of someone letting me in, but had no luck, and I had no idea how to get a key. On my third attempt a local birdwatcher opened up the door, he could have sent me on my way, but he didn’t. Instead he let me look through his scope, the moment when that spark hit me, in the scope view was a pair of Great Crested Grebes on a nest. The sheer beauty and exotic nature of this species gave way to a life with nature. 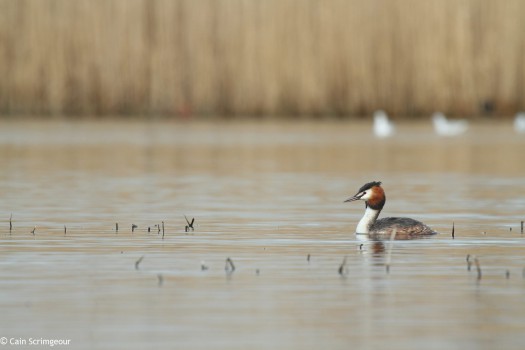 Holywell became my home I visited everyday. One morning at about 09:00, I crossed paths with a grumpy old man leaving the members hide, he had very few words for me, other than ‘You should have been here earlier!’ The next day I arrived at 07:00, and the man was there, his name was Eric Galloway and Holywell was his patch. He took my under his wing, teaching me the art of bird watching, taking notes, identification, migration, species distribution, and the ethics of observing. Opening my eyes to a world that I didn’t know existed, the world of conservation, the community of birdwatchers and naturalists, the possibility of careers living your dream.

Without these acts of kindness, I wouldn’t be the person I am today. In a world that’s becoming increasingly enclosed, I think it’s important to remember the power of a simple act of kindness, a selfless gift.

Cain Scrimgeour is a naturalist, wildlife photographer and film-maker from the North-East of England. Follow him on Twitter at: @cainscrimgeour