When asked to write a post about my favourite species I knew instantaneously the group from which I would pick this lucky creature from. Moths, our butterflies of the night, hold a very special place in my heart; to put it bluntly, I love them! I enjoy looking for all kinds of wildlife, from birds to beetles, plants to dragonflies. However nothing quite matches the sheer sense of wonder when you lift the lid on a moth trap (a plastic tub with a light bulb attached if you didn’t know!) and see hundreds of winged wonders sitting peacefully, just waiting to be identified.

The diversity of our British moths is something truly spectacular and marvellous to behold. Over 800 species of macro (larger) moth have been recorded in Britain, which is then dwarfed by the 1,627 micro (smaller) moths that carpet our green and pleasant land. They come in all shapes and sizes, colours and textures; from the vibrant green of the Emerald’s to the V-shaped Thorns, the metallic Y’s and the magnificent Hawkmoths. The names add further intrigue: Maiden’s blush, Gold spot, Drinker, Spectacle, Leopard and Sprawler. These furry bodied beauties are not only valuable to view, but also to those that eat them. Moths, and their caterpillar larval stage, are vital parts of the diet of birds and bats, without moths these species would struggle to survive. They also assist with pollinating flowers and are a vital part of many of our precious ecosystems. 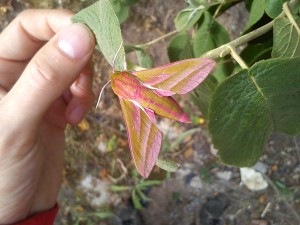 It has been difficult for me to pick one from the 400 or so species I have been lucky enough to see. However when I think about it, the choice is obvious; the one that got me into moths in the first place, the Elephant hawkmoth. Crouching round the bright light of a moth trap I remember fondly staring in silent awe as a large pink and green moth came hurtling in. The colours were so vivid, it did not seem British, looking more like some kind of exotic creature of the night from far flung reaches around the globe.

Elephant hawkmoth’s get their name from the fact that their large (it can grow up to 3 inches long) caterpillar is said to resemble an elephants trunk. They are a special moth for more than just their looks. They have some of the most sophisticated eyesight out of all our moth species and have been shown to be able to recognise different colours on the spectrum. Their caterpillars feed primarily on willowherb but have also be found to eat one of most troublesome invasive plants; Himalayan balsam. Perhaps it might one day help us eradicate this terrible species that is damaging our rivers. It is also a relatively common species, and one which you can sometimes find during the day, so keep your eyes peeled any time between May and early August when walking through areas of grassland where willowherb is plentiful. 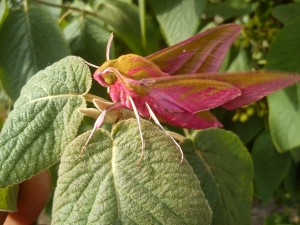 So what is there not to love about this magnificent moth, with wings like a stealth jet and eyes like olive pearls. Oh and it is bright pink; what more could you want?!

Simon has been a keen photographer for many years, as it goes hand in hand with his love of the natural world. Simon is a keen conservationist and naturalist and has worked for Wildlife Trust’s and other conservation charities. He currently works for the Warwickshire Wildlife Trust and spends as much of his free time out on nature reserves around the country photographing any wildlife he can find.
Views his own.