If I knew what swagger meant, I’d say that this bird had it. Show someone a Capercaillie for the first time and I guarantee they’ll be hooked. Turkey-sized grouse with razor sharp bills that meet in the woods for a punch up. The usually shy and elusive Capercaillie transform during the spring when the birds come together at traditional ‘lek’ sites where the males will display and fight in order to secure mating rights with any females present. 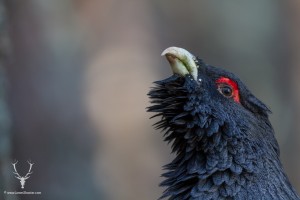 The complex display of the male Capercaillie begins with a song that involves a throaty tapping, a scratchy gurgling and a sound resembling a champagne cork popping. You really need to hear it to believe that description! Although you won’t hear all of it… no, no no. Part of it is subsonic and isn’t picked up by humans, but it’s that part that will travel well over distance and is perfectly audible to other Capercaillie.

If the competing low frequency calls of these woodland grouse fails to separate the men from the boys, they’ll turn to flutter-jump displays (does what it says on the tin) and then onto an intense confrontation whereby the pair may not stop until one is dead. 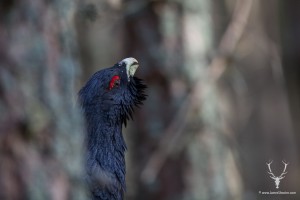 Males can get so pent up before and during the breeding season that they cease caring about what they attack and have been known to go for dogs, cyclists and even cars – enter: The Rogue. A study by Finnish scientists found that roughly 1% of the population was estimated to behave like this and that these ‘rogue’ birds had 5 times as much testosterone as normal displaying males.

What is equally as fascinating as their apparent hardiness is their absolute fragility. This species has already been extinct from the UK once before with the last pair reputedly shot for a royal wedding banquet at Balmoral in 1785. After a successful reintroduction in 1835 they are once again in serious danger of suffering the same fate, albeit not for the plates of royalty. 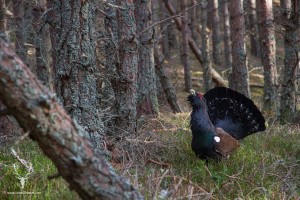 They are one of three birds, alongside Crested Tit and Scottish Crossbill that are solely restricted to the pinewoods of northern Scotland. An intense decrease and fragmentation of this habitat has a double effect of reducing suitable habitat size and also increasing the ‘edge effect’, essentially opening up the safety of the once deep forest to predators such as foxes, stoats and crows.

This important issue has been coupled with a number of other problems. Fatal collisions with deer fences, a series of wet and cool summers resulting in low chick survival rate and an ecologically unsustainable abundance of deer that eat everything in sight and limit suitable habitat even more by denying new growth.

So Capercaillie, for all their might, have it tough. But people are working hard to turn their demise around. The dramatic decline to an estimated 1,000 individuals has shined a light on their habitat requirements. Deer numbers are being controlled, disturbance limited and new interconnecting woodland is being planned and implemented by organisations such as Trees for Life. So all is not lost for the horse of the woods, but action needs to occur now not later, for it would be an incredible shame to lose this magnificent species not once, but twice.

James Shooter is a young nature photographer based between the Cairngorm Mountains and the Peak District National Park. He specialises in documenting British wildlife with a passion for telling stories of conservation through his pictures and writing, and is currently working with Northshots, who specialise in photographic tours and guiding.