Back in May, I happened to be sitting on the sofa watching Springwatch when the coolest bird came on TV, the Northern gannet. Iolo Williams was sent to Bass Rock in Scotland and that’s when I announced to my parents I was going to go there this summer, no matter what! I persuaded my Granddad who lives in Lancashire to take me and so in July, we went to Bass Rock.

We left Dunbar harbour at 6am and travelled on a fisherman’s boat to the island. The boat cabin obscured my view from the front of the boat and so I did not see Bass Rock from a distance. I knew we were close as many gannets soared from a distance. The boat turned slightly to the left revealing the vast rock. White patches covered across the steep-sided dark volcanic rock. As we got closer the white patches revealed to be gannets, thousands and thousands of them. The sight was extraordinary. 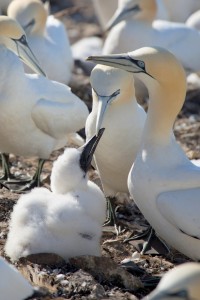 The Northern gannet is the largest sea bird with a wingspan of up to two metres. They hunt by diving from great heights of 30 metres into the sea and they are well adapted for this. Gannets have air sacs in their face and chest under their skin which take the impact of them diving at high speeds into the water. They do not have external nostrils; instead they are situated inside their mouth. Gannets can achieve speeds up to 60 mph allowing them to catch fish much deeper in the sea.

Gannets nest in large colonies; Bass Rock hosts 150,000 gannets on its steep sided cliffs. 70% of the global population breed in the UK. The same colonies are used year after year; the Bass Rock gannets were first recorded in 1448 and have bred on the island every year since. Their breeding range is influenced by the Gulf Stream, as the sea temperature depends on the distribution of Atlantic mackerel and herring, which is the gannet’s main food source. 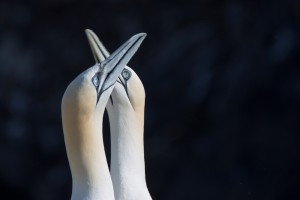 Gannets mate for life and the female lays a single egg each year. After seven weeks of incubation, the chick hatches and both parents care for the chick. Gannet ‘couples’ will display their bond by gently tapping and rubbing their bills together, a greeting ritual done throughout the summer season. Juveniles have dark feathers and are not completely white till they are fully mature at 5 years old. From September to October, gannets leave the summer colonies and the birds travel south to warmer climates for the winter. 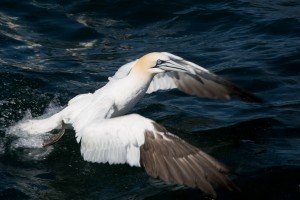 Mature adults have a while plumage with dark wing tips. Gannets have a long, strong blue-grey beak, black markings around pale blue eyes and a yellow coloured head and neck. Each foot has long toes which are joined by a black coloured membrane. Unusual yellow lines run on each toe to the claw.

I personally think gannets are fantastic looking birds and have a Jurassic prehistoric appearance with their elongated wings. And that my friends is the northern gannet, I cannot wait for them to return in the summer next year! 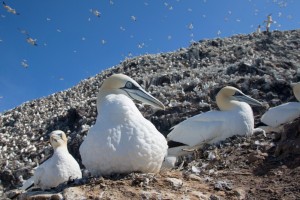 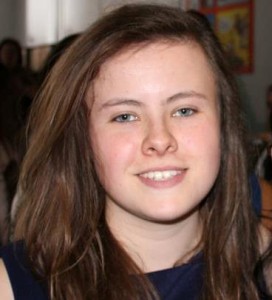 Danielle Connor is a multi-award winning photographer from Wimbledon, London. Her love for wildlife doesn’t have any roots; neither her parents have any interest; just as a child, she loved exploring the natural world, which has now become her main photography focus. At 15 she bought my own DSLR camera and since then she has been saving up for more lenses. In the future she would like to do something wildlife-related, whether it be photography, photojournalism or conservation.