“Barrel-maker”, “bog-bull”, “bog hen”, “bog-trotter” and “mire drum”. These are all names for the Bittern, one of the UK’s rarest birds. They are about two thirds of the size of a grey heron, and their plumage gives them incredibly good camouflage in their reedbed habitat, meaning the only chances of seeing them are in flight on when they come to the edge of reeds. Here in the UK they have endured some pretty tough times. Despite being common in West and Central Europe until the 19th century, degradation and destruction of its reedbed habitat drove it to extinction in the UK in 1885. Fortunately this wasn’t for long, and it was seen in Norfolk in 1900, before breeding there in 1911. After this, its population slowly recovered, rising to a peak of 80 booming males during the 1950s, before a population crash to a low of only 11 booming males in 1997 due to deaths in cold winters and impoverishment and loss of reedbeds reflecting a reduction in the market for cut reed. Since then its population has increased, and in 2013 there were a minimum of 120 booming males at 56 sites throughout Britain. During the winter the British population swells due to migrating continental birds to over 600.

In the UK it usually inhabits Phragmites reedbeds, where it hunts and nests. They hunt along reed margins for fish, amphibians, invertebrates and small mammals. Females build a shallow platform about 30cm across of reed stems close to the water, which will be added to in the case of rising water levels to ensure the nest’s safety. Males are polygamous, and can mate with up to five females during one season. They take very little part in raising the chicks, which will leave the nest at 50-55 days old. The males also perform a booming call from late January to establish territories and attract mates, a call that can be heard from as far as 3 miles away. The unmistakable sound is achieved by filling their gullets with air, before expelling it again. 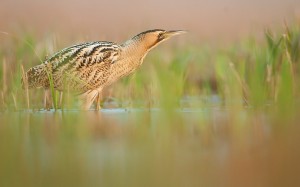 I first saw one at my local reserve, The London Wetland Centre. It is an oasis set in the heart of Southwest London, occupying over 100 acres, and contains a range of habitats, the most interesting of which, for me, is the reedbed; every winter it hosts overwintering bitterns. The first couple arrive in October, and when it gets colder this number can increase to as many as 8. I have spent countless hours in hides waiting for glimpses of these secretive birds, scouring the reed margins for the black and brown patterning on its back, its prehistoric red eye or its yellow-green legs. The thrill on seeing one is matched by nothing else, and when I am lucky enough to be able to get a photograph of them, the waiting is all made worthwhile. Bitterns are responsible for two of my most memorable wildlife experiences: the first was a week before Christmas in 2010 during a cold snap in which almost all the reserve was frozen over. The image I captured is perhaps my greatest achievement as it was commended in the Veolia Environnement Wildlife Photographer of the Year competition in 2012. The second encounter was in Suffolk during the spring. One fed in front of the hide, gradually moving from the left to right out in front of it, skulking through the low reeds, pausing to fish. Then it started coming closer, and closer, and closer still. It was now no more than six or seven metres from me. Eventually the sun dipped below the horizon, so I put down the camera and watched it until, when it was nearly dark, it took off with a harsh croak, and flew into the darkness.

Bitterns are now facing new problems due to rising sea levels which leads to contamination of freshwater reedbeds. Hopefully the creation of inland reedbeds such as Lakenheath Fen will ensure that Bitterns are a feature of the UK for many years to come. 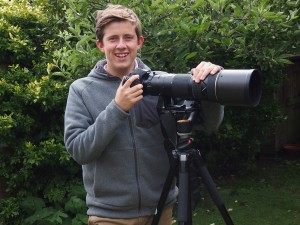 Oscar is an award-winning eighteen-year-old wildlife photographer based in London. From an early age he was a keen birdwatcher, and photography was an extension of this, when he first picked up a DSLR in 2008. Since then he has become far more focused on photography. Most of his photography is done in London, although he occasionally goes further afield.