Another day out in Hebridean waters and the conditions were perfect for spotting wildlife as the sea was flat calm like a millpond and we had fantastic visibility with the surrounding Scottish highlands and islands showing well. we had just encountered a hurry of manx shearwaters feeding ferociously at the surface plunging for small fish and zoo plankton. It was a great indicator of food source so the skipper of the whalewatch/research excursion cut his engines and now sound became as important as sight for tracking the marine life. After all on board persisted for a few minutes a shout was made…Blow! Everyone moved to the port side and about 300 yards away a minke whale surfaced elegantly with its rolling back eventually revealing its small dorsal fin. The whale approached our boat and swam right underneath us and the skipper announced that they are often curious and come and check us out. An associating ten metre mammal, that was my first experience of a minke whale. 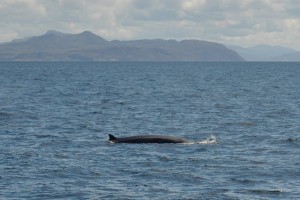 Their sociable behaviour is one of the main reasons for my admiration of the species and on another calm summers day off the coast of Coll we had just arrived at a traditional minke feeding ground. I was lonesome on the bow of the boat scanning the seas when I noticed a white object just below the surface 15 feet off the bow. At first glance I thought it was marine litter like a Tesco bag but once I focused out a bit I was looking at the clean white band on the pectoral fin of an adult minke whale! The animal was just below the mirror calm surface and appeared to be stationary. I could see a minke whales tail fluke in detail for the first time which they never show on a deep dive. I could see its streamlined appearance designed for speed, with rorqual whales been among the fastest in the ocean. I could also see its single prominent ridge running from its snout to its blow hole. But what I was about to see would top all that as the animal rolled over on its side like a domestic dog and looked right into my eyes! A one to one personal encounter with a wild whale is something I will never forget.

Encounters with minkes can get even more personal when you can be on first name terms with a whale. This is down to photo identification work taking pictures of their dorsal fin when they surface. A dorsal fin can be unique in shape, size and markings and can be used as the whales ‘fingerprint’. Over a hundred minke whales have been positively identified in Hebridean waters with some individuals returning to their favourite sites consistently.

My favourite identified minke whale is known as Knobble. He/she has a very distinct triangular dorsal fin with a Knobble on top and was first recorded in 2002 and has been seen on every season since except 2005. Knobble is the most frequent minke seen in recent years on whalewatch/research trips running from Mull and has also got a very sociable/inquisitive nature. Knobble was seen 12 times in 2013 and amazingly the majority of the sightings were in the exact same feeding area which reiterates how sight faithful the minkes can be in these waters. Knobbles celebrity status increases with every sighting and the whales story even made national papers earlier this year. 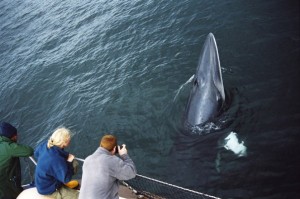 The minke whale is the second smallest baleen whale which includes its larger cousins the blue and the fin whale. Baleen whales are characterised by their horny plates which hang down from their upper jaw, and through which they filter their food. The name ‘minke’ originated from Norway where a whaler called Minkehval misidentified a harpooned whale thinking it was a young blue and it was actually a new species now ironically named after himself. Their food source is a variety of small fish like sand eel, sprat and young herring along with zoo plankton. The movements of minke whales in the UK are little understood. They are mainly seasonal visitors to our waters but they do get recorded here in the winter months. Migration could take them south to richer tropical waters to give birth and raise young but could animals move north in range of Icelandic and Norwegian whaling vessels?

Footage of an associating Minke Whale, with permission from Andy Tait

The minke whale is a graceful species and I hope more people are made aware that we get them on a consistent basis in our waters. Great Britain is one of the best places in the world to see minkes. You don’t need to go half way around the world to see great whales when their just off our coastlines. I think the minke whale represents our oceans around the UK as a whole, underrated beauty that we still know very little about. 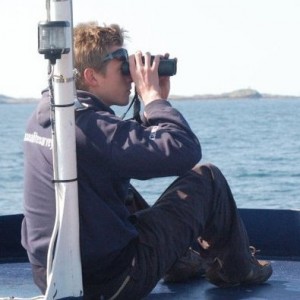 Ewan is currently working for Sea Life Surveys on the isle of Mull as a guide. His main duty is making sure that the passengers get the best wildlife experience possible on the marine excursions. He also contributes to the research of Minke whales, Basking sharks and other marine life. His local stomping ground is the vast upland area of Geltsdale, Cumbria in the Northern Pennines. Birds of prey helped inspire him to a lifetimes love of all wildlife.