So far in my life, three species of birds have made a significant impact. The Great Crested Grebe (Podiceps cristatus), was my spark, the moment when an interest becomes a passion and a life, the Pink-Footed Goose (Anser brachyrhynchus) was the beginnings of my career, the species which put me on that ‘ladder’, and the Sparrowhawk (Accipiter nisus), the Sparrowhawk is part of me. 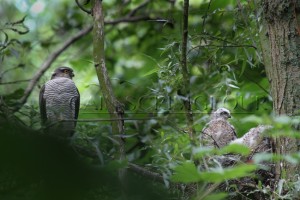 I’ve lived and grown-up in Whitley Bay, in West Monkseaton on the edge of Newcastle-Upon-Tyne’s Northern Green Belt. A relatively green area, but at the forefront of housing development, my playground was the ‘wastelands’, either unsuitable to be built on, or areas of land set aside, planted with trees or left to go wild. I shared this area with other kids, recreational drug users, and wildlife, the Sparrowhawks home, and hunting grounds. The largest of these areas we called Red House Farm Woods, a small area of wasteland, and planted trees, densely packed with little or no ground cover, in our sense this place was big. Next inline was ‘Tramps Den’, so called as a tramp used to live there in a small wooden shed, a strange, large boggy wood in the middle of a housing estate, then the ‘Beacon Woods’, and ‘Saisnbury’s Wood’. These woods, and wastelands formed my first patch, and the Sparrowhawk families territory.

It was one Summers day, when I was exploring the smalls woodlands when I heard it, that intimidating sound of a female Sparrowhawk letting you know that your not welcome in her wood. I’d seen the pair displaying in the Spring, battling with the Carrion Crows which shared the same territory, I’d seen the male bird, and a youngster hunting the House Sparrows in the back garden, and I’d once seen the female in the hand, when my dad caught it from next doors conservatory, but I’d never heard her, and never seen her, in her wood. Here was an untamed wild bird, adapted to its urban life, but stuck firmly in its wild routes, something that I felt I could relate to. It was clear why this was her wood, a land that time forgot, sticky-weed up to your chest, Speckled-Wood Butterflies here and there, Blackcaps breeding in the dense woodland floor, as Foxes silently walked through. It felt like a fragment of the past, a fragment of the wild, perfectly suited to this stunning bird. 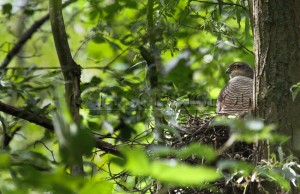 From that moment on, I followed the story of the Sparrowhawk family each season, setting out on the 1st of May every year to find the nest. Searching through the woods sometimes added challenges, avoiding unsavoury characters, and the police, I found myself in the back of a riot van once, as the police thought I was a druggy, they laughed when I told them I was a birdwatcher. As a kid I used to climb up to the nests, to look at those stunning brown-mottled eggs, or the white downy chicks, and the scruffy looking youngsters. As I grew, and my knowledge of the natural world, and ethics developed I began taking a step back, observing, and in August 2011, filming the nest.

The Sparrowhawk, in my books, is one of the greatest natural wonders of Britain, an urban predator, traversing and adapting to its habitat, but continuously keeping that wild state of mind. 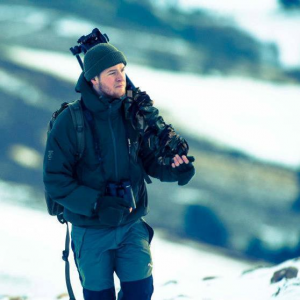 Since an early age the natural world has had Cain hooked. At the age of 13 he experienced the ‘spark’, a pair of Great Crested Grebes had built a nest at Holywell Pond, a local Northumberland Wildlife Trust Reserve.  He is beginning to make his passion his life, through photography and filmmaking, working for organisations such as the RSPB, Northumberland National Park, English Heritage, Northumberland and Tyneside Bird Club, ORCA and ITV.