The European badger is probably one of the most well known and recognised mammals in Britain. They have appeared in many traditional British children stories such as the Tale of Mr Tod by Beatrix Potter.

The Badger is our biggest land predator and belongs to the mustelid family which also includes Stoats, Weasels and Otters.  They are nocturnal mammals and have a diet which consists of small mammals, ground-nesting birds eggs, fruit, bulbs and they can eat up to several hundred earthworms each night. Badgers are a very social species and live together in underground setts. They spend around 70% of their time underground. The groups are formed off up to six adults on average, though groups of up to 23 have been recorded. 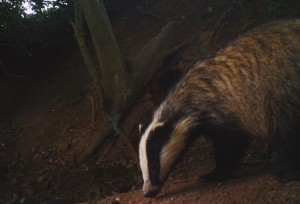 To identify a badger is very easy; they are large and grey with a short fluffy tail, black belly and paws and the familiar black and white striped face. Their average lifespan is three years but they can live up to 14 years in the wild. They can be found throughout England, Wales, most of Scotland and Northern Island.

In recent years badgers in the UK have been killed for all matter of things. Many badgers were gassed during the 1960s and 1970s to control rabies. Until the 1980s badger culling in the United Kingdom was undertaken in the form of gassing to control the spread of Bovine Tuberculosis (TB). Now in 2013 Wales and Northern Island are currently conducting field trials of badger vaccination program. In August 2013, a full culling program began where it was expected that 70% of the badger population would killed over six weeks in West Somerset and Gloucestershire. However, a few weeks ago the cull was called off because not enough badgers were expected to be killed to meet targets. After the recent eight week extension the cull wasn’t meant to end until the 18th of December but it was stopped just over two weeks earlier – so the badgers can now have a quiet Christmas!

A while back I got my very first trail camera, straight away I decided to set it up at a nearby badgers sett. Before this I hadn’t really took much interest in badgers but it wasn’t until I replayed my footage that how interesting and amusing they were. Here are some short clips which I recorded.

Georgia is a young wildlife enthusiast interested in all types of wildlife and she has been for as long as she can remember. She has been running her wildlife blog for just over a year now. She enjoys watching, blogging, photographing and filming wildlife especially on her trail camera. You can join her on her wildlife adventures and much more by following my blog – http://georgiaswildlifewatch.blogspot.co.uk/