Last week, Theresa May announced that a re-elected Conservative government would vote to repeal the ban on fox hunting. I think it’s safe to say that conservationists around the country let out a collective sigh of exasperation at this news, but unfortunately it appears we are doomed to be haunted by the issue indefinitely. 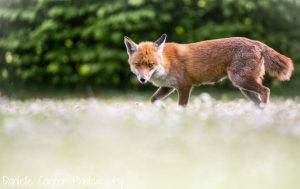 First of all, let’s look at some of the politics behind the announcement. It is likely May did not want to revisit such a controversial topic in the middle of an election. It certainly doesn’t reflect public opinion, with 84% of Britons opposed to fox hunting and only a small minority of the population campaigning to bring it back. However, her hand was forced as a leaked email from the Council of Hunting Associations revealed the strong likelihood of a free vote if the Conservatives won a majority and called for the support of pro-hunting candidates in marginal seats.

A repeal of the 2004 hunting ban has long been on the Tories’ agenda. However, Cameron was unable to bring it to a vote as he didn’t have a large enough majority. If the polls are correct, this general election is set to give May enough seats to be able to pass just about anything she wishes, even in spite of the thirty or forty Tories who would choose not to toe the party line and vote against a repeal. What this announcement will do is allow her to claim that her re-election ‘mandated’ the party to put this issue to a vote.

So with the politics out of the way, what actually is fox hunting? The blood sport dates back to the late 18th century and involves a pack of trained foxhounds chasing a fox under the guidance of a group of hunters on horseback or on foot. The hunt would end either with the exhausted fox being killed by the hounds, or with the fox going to ground, only to be dug out with the help of terriers and finished off. Since Labour’s hunting ban took effect in 2005, ‘drag hunting’ has been adopted, where a scent is laid for the dogs to follow in order to simulate a hunt. Unfortunately, there have been many reports of hunts illegally killing foxes, either intentionally or as a result of a lack of control over the dogs. However, this does represent a minority of the hunting community.

Despite only 12% of the population in favour of bringing back fox hunting, it continues to hold the support of many MPs and influential groups such as the Countryside Alliance. Justification of their support is varied, but I will outline two of the most common reasons and discuss their validity.

The first argument often raised is that fox hunting is a British tradition that must be upheld as part of our culture and heritage. I understand that for many people in rural areas traditions form an important part of their national identity. However, my issue with this view is that simply because something is traditional, its does not make it right. Over the years we as a country have had to sacrifice an immeasurable number of ‘traditions’ because they no longer align with our evolved societal values. Badger baiting and hare coursing were both banned because of the realisation that they were unnecessarily cruel and inhumane, however, there have been very few calls to reintroduce these blood sports.

Another common but misguided view is that fox hunting is necessary for ‘pest control’ in order to keep their numbers down. This is often used to try and give a practical, utilitarian argument for the hunting of foxes, but it is inherently flawed. There is, dare I say it, a ‘strong and stable’ population of around 225,000 rural foxes in Britain, as estimated in 2000. It is true that foxes do cause some issues in rural areas, including predation of livestock and damage of environments; farmers are perfectly entitled to shoot problem animals when necessary. However, the idea that fox hunting is a viable method of population control is entirely unfounded, with studies showing that hunting accounted for only 5% of total fox mortality each year. It has also been found that there is no significant difference between the number of rural foxes present before the ban compared to after the ban, showing that hunting had no impact on population size.

It can start to feel a little repetitive when, time and time again, conservationists continue to dismantle these weak arguments against the fox hunting ban, and yet we still find ourselves in the same position – defending the rights of an animal that has no voice of its own. We need to open up a proper debate, but at the same time that debate must be fought with genuine reasoning rather than baseless rhetoric. It may seem that with a large Conservative majority the fate of the red fox will be out of our hands, however, together we all have the power to make sure this species is fairly represented. The fox hunting ban is set to become the next big battle for wildlife protection in this country and we must be ready for it. With 84% of the population on our side, we need to show the government that it cannot overrule the will of the people in favour of the few.

Russell Barnett is a 21 year old filmmaker and photographer, studying BSc Conservation Biology at the University of Exeter’s Penryn Campus. You can follow him on Instagram @russellebarnett and check out his website.